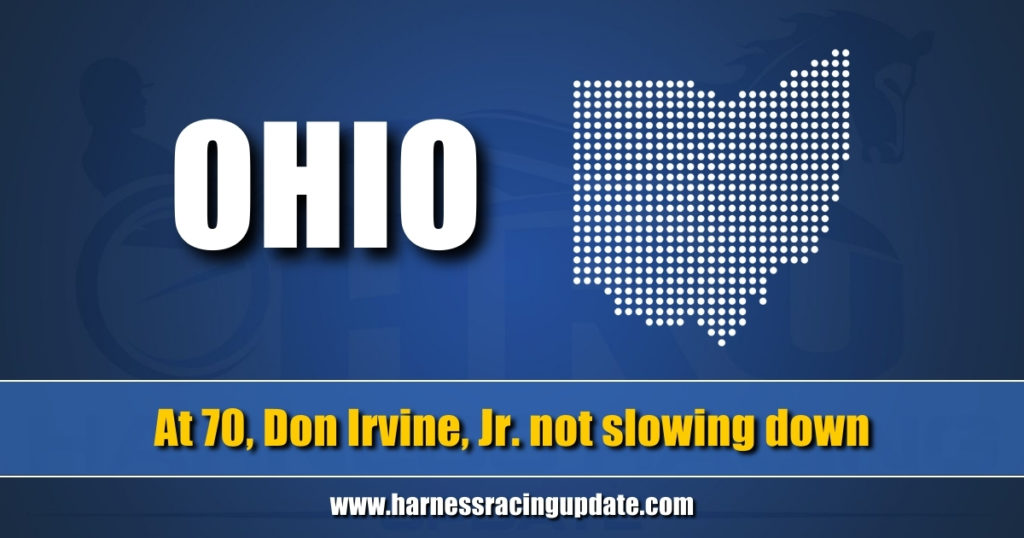 Reinsman looking for a big night tonight at Hollywood Gaming at Dayton Raceway in the Ohio Fairs Championships.

Despite turning 70 years of age back in February, driver Don Irvine, Jr. has put together another successful season with a .293 Universal Drivers Rating featuring 80 wins and just shy of $500,000 in earnings.

Irvine has five chances to add to his 2021 totals in the $320,000 (div.) Ohio Fairs Championships tonight (Oct. 9) at Hollywood Gaming at Dayton Raceway.

The Ohio Fair Championships brings together the top nine points earners from the 65 Ohio county and independent fairs across the Buckeye state.

The septuagenarian looks to start the night off with a bang in race #1— the 2-year-old filly trot, drawing the rail with the 5-2 morning line choice, Hitwiththeguy’s.

Irvine is very familiar with Hitwiththeguy’s as he drove her eight times this season, recording seven wins and a second-place finish.

“She’s the one horse that I didn’t want to draw the rail with,” said Irvine. “She’s a little erratic behind the gate. She hasn’t made a break since her first couple of starts. It’s my job to make sure she gets out on the trot. If she does, she’ll have a big shot.”

Hitwiththeguy’s is the daughter of Hitwiththeladies, a little known and used stallion that had only 15 registered foals during his first seven years at stud. Hitwiththeguy’s has a 9-1-0 record in 12 starts and has earned $23,379 for trainer and owner Sue Stockwell.

Irvine has driven A Handsome Face in all 12 of his seasonal starts. They have teamed up for seven wins in his last nine starts, including a $17,500 leg of Buckeye Stallion Series at the Champaign County Fair in Urbana on Aug. 10.

“It probably looks like I didn’t take the right horse. Rose Run Exalted looks like the best one out of the three. Mr. Troyer, who buys all of these babies for Rosy who co-owns her, so I picked that one.

“I think all three, depending how the race falls, have a good shot to win,” Irvine, Jr. said.

Elegant Gigi is a winner of six straight races at Mount Gilead, Canfield, Wooster, Delaware, Dover and Coshocton. The Delaware win was in the fifth leg of the Buckeye Stallion Series, earning her a spot in next weekend’s $60,000 BSS Final at MGM Northfield Park.

“She’s got a real good shot. She has a couple to beat, but she’s really sharp right now. I know that,” said Irvine.

Her lifetime mark of 1:55.2 came in the Summit County Fair races at MGM Northfield Park on July 30.

Weaver owns the Dejarmbro filly, who has been consistent all season from April through October.

Irvine will conclude his night with a pair of 3-year-pacers for trainer Herman Hagerman.

In the sophomore colt pace, Irvine will be behind Yankee Keeler (Post #5; 9/2).

The homebred Yankee Cruiser gelding has recorded six wins and has earned $39,261 this season for A Piece Of The Action LLC.

“He’s a little over his head. He’s a good county fair horse and gets around those small fair tracks well, but the horse on the rail (King’s Cruiser with driver Tyler Smith) should lay over the field,” said Irvine.

Despite tonight’s results, Irvine has shown great longevity during his 50-year career.

He was the six-time driving champ at MGM Northfield Park (1970s and 1980s), had six additional titles at Harrah’s Hoosier Park (1990s and 2000s) and added a couple more at a pair of Maryland tracks — Freestate Raceway and Rosecroft Raceway.

Irvine’s success at Northfield secured him the honor of being an MGM Northfield Park Wall of Fame inductee in 1991.

“That is the most I ever won at a fair. I won nine at Northfield one night. I won eight or nine once over in Maryland,” said Irvine. “That was a good day for a guy 70-year-old.”