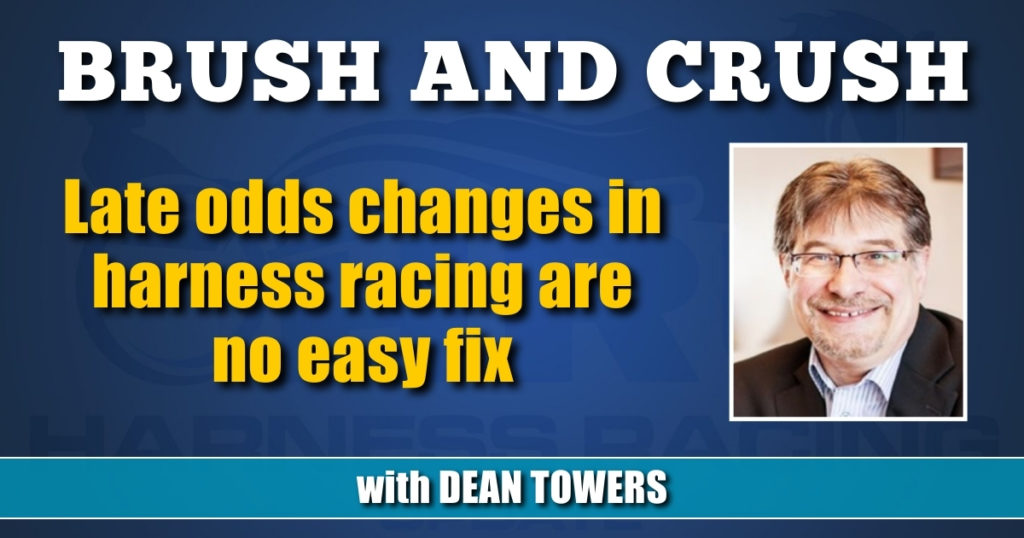 Late odds changes in harness racing are no easy fix

The New York Racing Association has been banning computer assisted wagering near post time and fixed odds are beginning to be examined, but a path forward remains elusive.

Back in 1975 at Roosevelt Raceway, a racing patron waited patiently in line for his or her turn to bet. Their horse was a 5-2 shot, they got their bet down, and after the horse won, the lucky gambler would receive about $7. If they got $7.60, it would be like some sort of windfall.

Today, as we all know, it’s not like that.

In the first race on Friday, Oct. 1 at the Red Mile, Anvil Hands looked to be a pretty decent bet at even money or 6-5, and that’s exactly what the horse was as they moved behind the gate. Forty-five seconds later, faces met palms as he dropped to 1-5. In the second race, Dave Menary’s World at War Deo was 9-5 at the gate, 4-5 at the half; in the third, Lyon’s Serenity was even money, only to be 1-2 after the wings opened.

It’s just the way it is in 2021, because it’s how the tote system works. In the first race at the Red Mile on Friday, 59.2 per cent of money came in at zero minutes to post; in the second race, 44.6 per cent of cash came late. On average, at all harness tracks we can expect about four of every $10 to come after the word go.

The general consensus is that this money comes from the bogeymen and women called “Computer Assisted Wagers,” (CAW) but in my view that’s way too simplistic.

First, CAW teams bet more than one horse (especially in harness racing), because they are bringing the win pool into equilibrium. Second, there are sharps all over – at Xpressbet, Twinspires or HPI – that know Lyon’s Serenity is not an even money horse, but much closer to 1-2 or 3-5. And third, although we often lament late odds drops when they win, we have to consider that they only win a part of the time. Lyon’s Serenity was crushed late but lost, and backers of Boudoir Hanover cashed a $5 mutuel, up from 6-5 at one minute to post.

Regardless, this is a problem, and one entity on the thoroughbred side – the New York Racing Association (NYRA) – began banning CAW wagering after five minutes to post in late July.

Thus far the results are mixed. I independently analyzed several NYRA races during August and did notice less movement in the odds board from zero minutes to post. However, win pool handle, according to the Daily Racing Form, was down 12 per cent.

Both I think should be expected. It’s rational and common sense to conclude that without big money coming in late to correct an odds board, things will be corrected earlier, and odds swings late will show much less variance. And, it’s an immutable truth that the algorithms used by the wagering teams require real time board data to settle on their win pool bet choices (and sizes). Without this input, their edge (pennies to begin with) will be eroded. These teams simply don’t bet at all, or lower their bet sizes appreciably.

In effect, to “fix” a problem with a win pool in 2021, meant the business probably took in less money.

Whatever the final results of the experiment, I think it’s clear that simply banning money from a pool is not an optimal solution.

In harness racing, late odds shifts have become so commonplace that bettors seem to be immune to it all. This is exemplified with the significant handle growth in multi-leg wagers like the Pick 4 and 5. Again this is perfectly rational gambling behavior. If a bettor doesn’t know if a horse is going to be even money (a 50 per cent chance at winning the race) or 1-5 (84 per cent chance), why would they bother? Ask a sports bettor if the New York Giants moving from +6.5 to +7.5 makes a difference. It does and it will attract millions of dollars to the opposite side. In racing we can’t even see the sides.

At the present time, I fully expect things to muddle along because the fixes — a new tote system, fixed odds or exchanges – represent a brand-new paradigm that will cost time and money. The late odds shifts and the customer’s decoupling from the win pool is the worst kind of business issue. It’s a problem with no fix.