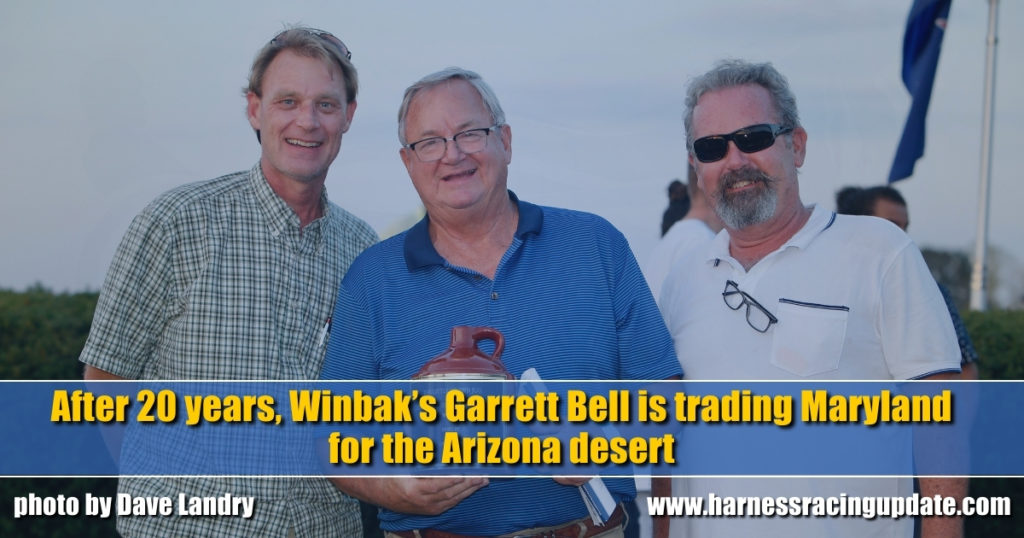 After 20 years, Winbak’s Garrett Bell is trading Maryland for the Arizona desert

Team Winbak is out in full force at the Lexington Selected Yearling Sale, but for the first time in nearly 20 years, a familiar face is missing — former farm general manager Garrett Bell, nephew of farm owner Joe Thomson.

On Sept. 11, Bell left Winbak to move cross country to be with his wife, Kerri Brodek, who has been living in Arizona for the last year-and-a-half caring for her parents who are in declining health. Originally, the plan was for Bell to leave Winbak in December after sale season concluded.

“She’d come back (to Maryland) for a month or so, but we’ve been away from each other for almost a year-and-a-half. I took her out with the dogs and all our stuff on the first of August and I was there for three weeks and it was heaven. It was my heaven and, on my way back, I was thinking, ‘I’ve got to get back as soon as I can,’” said Bell, who, before starting at Winbak, lived in California for over a decade and enjoyed visiting Arizona.

“I just love the desert,” he said, acknowledging it’s a complete change of scenery from living in Maryland.

“My initial plan was to stay (at Winbak) until the end of December, but when I got back I talked to Joe and I said, ‘I haven’t been that happy in a long, long time and I’ve gotta go.’ He understood. He was not happy about it, but he completely understood and supported me the whole time. Not only is he a great guy to work for, but he’s an amazing uncle.”

Thomson said Bell will be missed.

“He is a good guy with a lot of common sense and he was an anchor for us. Whenever there was a crisis, he was on top of it and he could deal with it without a lot of emotion or a lot of going crazy,” Thomson said. “He’s my nephew and we’ll miss him. I’ll miss him at the sales and I’ll miss his day-to-day, the way he operated (Winbak). I wish him good luck out there. He’s gone out there with his wife’s family and so forth and I hope everything goes the way he wants it to.”

Thomson said Jack Burke has taken over for Bell as general manager and is the main contact for farm matters.

“Believe it or not, (Burke) is my wife’s nephew,” Thomson said. “He’s taking on a lot more responsibility, but (yearling manager) Jimmy (Ladwig), I don’t think you can find a guy that’s much better than Jimmy when it comes to raising yearlings.”

Bell started at Winbak on Dec. 2, 2001. He said he would have liked to have stayed until Dec. 2 this year to officially mark 20 years with the farm, but ultimately decided, “What’s two months? It’s 20 years. I’ve been there 20 years.”

He said he is most proud of the growth of Winbak over the last two decades and, “the teamwork of the people that work there. It’s just incredible how we get along and how we get things done. Jim, the yearling manager, he’s been doing it for 20 years. One of our vets, Sarah (Mackie), she’s been here for 18 years. Our broodmare manager, Becky (Healey), she’s been here for 10 or 15 years. So, it’s just the team and the teamwork. That’s what I’m most proud of, I think. All the accolades and all the horses we’ve put out there that have won, that’s phenomenal and that’s just proof in the pudding that we do work together well and get the job done. Having Joe and JoAnn as the leaders, they always kind of let us do our thing. Of course, they have day-to-day input, but they let us do our thing and it’s just been great. It really has.”

As for what comes next for Bell, it’s as much of a departure as Arizona is from Maryland.

“We’re going to wing it for a little while. My wife walks dogs and she’s got a dog walking business out there, thanks to her parents. Her parents live in a giant retirement community with 4,000 houses, so there’s a lot of retired people who want somebody to walk their dogs. So, I’ll be walking dogs and helping her out with the dogs and her parents.

“As far as a true job, I’ll figure that out when I get there. I plan on doing my own woodcarving and woodworking,” said Bell, who got hooked on woodworking some seven or eight years ago on a trip to Germany to visit his brother.

“We were there at Christmas time and they had all of these Krampus parades. They have these masks that are handmade and they are worth… well, they are really priceless because they are handed down from family to family to family. It’s this huge thing. We were at this parade and we just had a blast and I said, ‘I’ve got to try to make one of those’ because I just loved it. So, I did and I didn’t like the first one. So, I made another one and it was okay. I think I’ve made five of them, I think.

“My wife didn’t like them because they creeped her out so I sold them all, which was good. I got a decent price for them. I started doing dog busts. I’ve done eight or 10 dogs and I sold some of those and given a lot of them away. So, that’s what I’m going to try to do. And, I’ve always tinkered with making small side tables and things like that, so I’m going to be doing that, too. If I can make money at it, then great and I will and, if not, then I’ll have to find a job. Who knows, maybe she and I can just walk enough dogs to get by.”

It’s a long way from running one of the largest standardbred farms in the world.

“Sometimes, I would sit back and think, ‘Geez, I’m running a multi-national, worldwide company’ and it just blew my mind. We’ve got the stallions in Australia and I’m talking to people in Australia. The contacts and the people that I’ve met and made – it’s just incredible for me,” Bell said.

As for leaving racing, Bell said it might not be forever.

“I heard not too long ago that Nevada is opening up a program or trying to open up a standardbred program. I heard that Arizona is probably going to try to lock on to Nevada, which is trying to do something with California. So, it would be like a tri-state deal. I’m thinking, ‘Well, I’ll be out there, so if people need anyone… Who knows what will happen? I might go out there and get right back into the standardbreds.”