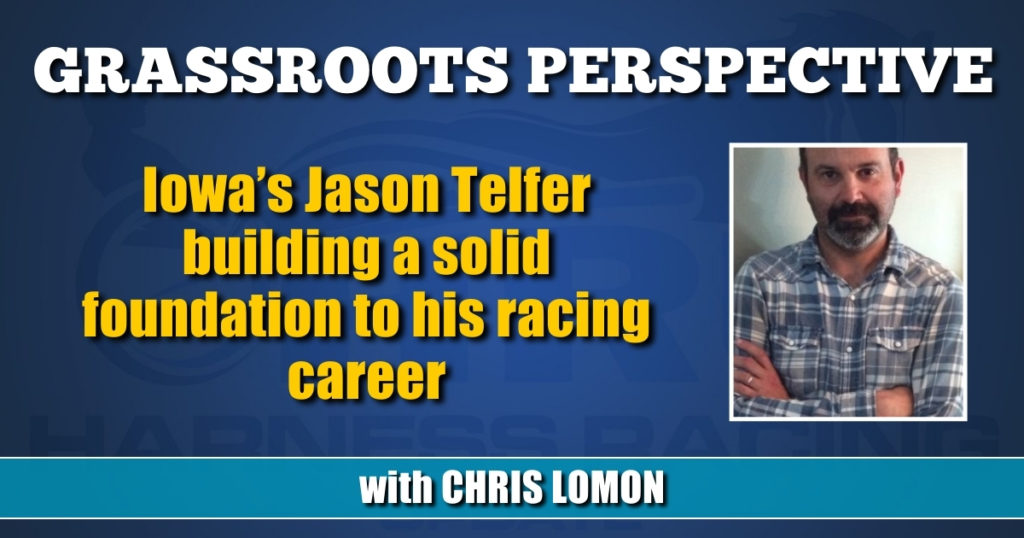 The construction of Jason Telfer’s harness racing career started with a solid foundation.

A native of Ottumwa, IA, Telfer, who works full-time in the construction industry, grew up in Eldon before making the move to Selma, the place he currently calls home.

His parents were longtime horsepeople before they eventually got out of the game. His great-grandfather also had strong ties to the sport.

Although he had been around horses for a long time and was quite familiar with the standardbred world, the idea of making a career of it had never really crossed Telfer’s mind.

Telfer’s interest in racing was sparked when he began dating Heidi Saner, now his wife, over 15 years ago. Her father, John, who was part of the Illinois racing scene, found his way back to Iowa.

When his future father-in-law started working with horsemen, father and son team Paul and Gary Liles, Telfer went along for the ride.

The more he found himself at the racetrack, the more interest he took in all aspects of horse racing.

“I’m so glad I did go. It was great feeling being around the horses and enjoying that atmosphere. It really sparked something in me.”

Not long after he started jogging horses, Telfer asked if he could hop into the driver’s seat.

Soon after, he was in the race bike, driving at fairs throughout his home state of Iowa and winning races.

Despite a few nervous moments, his first time in the sulky proved to be a life-altering experience.

Soon after, he took part in his first race at a regional fair in Eldon. Although it didn’t produce a storybook ending, Telfer was thrilled at the idea of starting a new chapter in his life.

It took seven more races before he notched his milestone first win, the victory coming with trotter Hasty I D Claire on July 5, 2017.

Family, friends and others joined Telfer for the winner’s circle photo – and plenty of other pictures afterwards – to celebrate the moment.

“It was a special moment, for sure. I really look up to my father-in-law a lot. He got me into racing, and he’s been it pretty much his whole life. I’m really grateful for what he’s done for me.”

Fast forward to present times and Telfer has built quite the successful career in the bike, one that enables him to focus on his full-time construction job while also having time to reap the rewards of driving, training and owning standardbreds.

His 2021 season has been his most memorable to date.

As of Oct. 4, Telfer has a driving mark of 7-9-11 from 57 starts. He’s also set a career-best number in the purse earnings category.

A horse by the name of Nutter Butter might help him add to his ownership successes.

Telfer owns the 3-year-old trotting daughter of Neely Dunn (IN).

“I’m sending her out to Pennsylvania to race. She’s getting leased out to one of our friends from Humboldt (IA), Brady Jenson, who races at Running Aces. Every winter he goes to The Meadows. He’s been interested in this filly, so he decided to make an offer and I decided to lease her.

“She’s a really nice filly. She did really well as a 2-year-old. When she was turned out, she stepped on something and got it in her foot. She didn’t come back around as we hoped when she was a 3-year-old, but she’s a very nice filly.”

There have been other highlights along the way.

One that quickly comes to mind is Detonator Dude, a 2-year-old pacing son of Transcending that Telfer pilots.

“We were second in a $15,000 race at What Cheer in mid-September. He’s a really nice horse. And since he’s bred in Iowa, he’s eligible for a lot of the big races here. He won on September 26th and he gets better every time he’s on the racetrack.”

After initially dismissing the notion of any similarities between construction and racing, Telfer found some connections between the two.

“When I show up for my construction job, I’m not sure what I’m going to be asked to do for the day. And that’s kind of what happens at the racetrack. You don’t know what a horse is going to do or what they are going to need each day. It’s unpredictable, even within a race. You don’t always know if the horse will have a good or bad race. It could be an off day… everyone has them.”

On those tough days, Telfer isn’t the type to dwell on what could have been.

Instead, the avid deer hunter embraces the uncertainties of the sport and focuses on the things he can control.

“Sometimes it’s one bad week, sometimes it’s two weeks… you have to let it go and move on to the next week. You win more than you lose in this game, so you put your mind to doing what you can to make next week a better one.”

One constant for Telfer is his enjoyment of working with young horses.

“I help my father-in-law break weanlings. That’s one of the best parts of this business. You work with all types of personalities. The crazy ones sometimes end up being the best one in the barn. It’s that whole process of seeing them start out, get better, smarter and faster.

“Detonator Dude was one of those high-strung horses who turned out to be a really good one. I told my father-in-law I’d let my daughter drive him now. It was amazing to see how he changed over time and that you were part of it.”

Telfer and Saner played a major role in the success story of pacer Snobbytown.

Bred by Scott Hagemeyer, the daughter of Nob Hill High (OH) is now in the stable of Ron Burke, who co-owns the 5-year-old with Weaver Bruscemi LLC and Jason Melillo.

“We had her. We don’t her anymore, but we still keep track of her. We watch her races all the time. It’s a nice feeling to know that you broke that horse and that she’s gone on to do so well.”

It’s exactly what Telfer is hoping for himself.

His top priority, short term, is to keep a narrow focus on his racing career. He hopes that approach will pay off in seeing his long-term goal come to fruition.

“My father-in-law jogs them and takes care of the horses. When I get my free time – I get Friday, Saturday and Sunday off – I’m right there with him. I would love to quit my construction job and do horse racing full time… if I ever get there. I really hope I do. Otherwise, it’s just taking it day-by-day, one step at a time.”