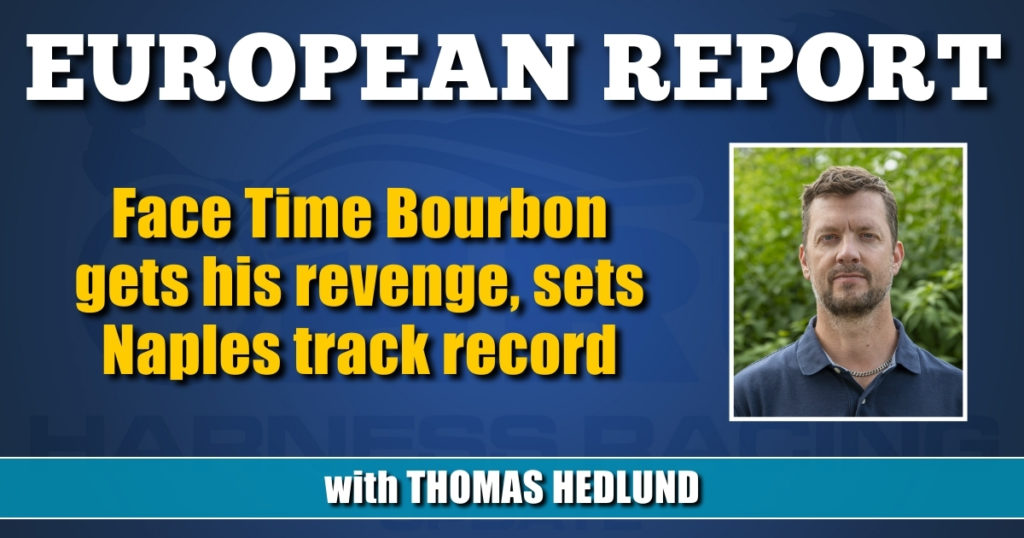 Gocciadoro dominated the three elimination heats and his Alrajah One (Maharajah) defeated the big favorite Face Time Bourbon in the second elimination. Gocciadoro sent his horse to the lead after the first turn which resulted in a pocket trip for stablemate Vitruvio. Face Time Bourbon was beaten by a head after a first over trip while Alrajah One came home in track record 1:53.1.

Gocciadoro won the first elimination with Vivid Wise As (Yankee Glide), driven by Matthieu Abrivard and Vivid Wise As controlled the field from the lead while title defender Zacon Gio claimed the silver and a spot in the final as runner up after a second over trip.

Heat three became a total Gocciadoro show as he claimed all three tickets for the final. Gocciadoro steered Vernissage Grif (Varenne) to victory and stablemates Global Trustworthy and Bubble Effe followed behind as second and third.

Gocciadoro had six out of nine finalists and it was no longer obvious that Face Time Bourbon would collect the prestigious trophy on Italian soil. But, as the final went on, everything worked perfectly for Sébastien Guarato’s horse. Eric Raffin placed Face Time Bourbon second over, covered by Vivid Wise As who had to accept the first over trip, outside of leader Alrajah One.

When Vivid Wise As ran out of power in the last turn, Raffin attacked three wide and Face Time Bourbon answered perfectly over the stretch. Alrajah One tried to defend himself as well as he could, but Face Time Bourbon’s ability for speed was too much for the Gocciadoro-trained leader and during the race’s last 100 meters it was clear that Face Time Bourbon would reach his desirable trophy and he did it in a track record of 1:53.

Alrajah One held to second place ahead of Vitruvio. It was announced that runner up Alrajah One left Alessandro Gocciadoro’s stable after the Sunday’s race card. The new trainer is now Holger Ehlert.

The $230,000 Finnish Kriterium for 3-year-old horses was held in Tampere on Saturday (Oct. 2) afternoon and Planbee (All Laid Out) posted an upset after a guarded trip as fourth on the inside.

Tommi Kylliäinen drove the 3-year-old gelding and the duo caught up with leader Shackhills Twister shortly ahead of the wire, as free space to sprint arrived at the top of the stretch.

Focus at Åby racetrack this Saturday

One of the most interesting race cards of the year in Sweden is offered at Åby, outside of Gothenburg this Saturday (Oct. 9). Highlights such as the $465,000 Grand Prix de l’U.E.T. for 4-year-olds bred in Europe, $115,000 Championship for mares, $115,000 European Championship for 3- and 5-year-olds and $115,000 Swedish Championship are on the schedule and several top trotters will make their journey’s to the Swedish west coast on Saturday.

The UET Grand Prix is definitely an interesting story where undefeated Derby winner Calgary Games (Readly Express) chases his ninth consecutive win and where he will face merited French top 4-year-olds, among others.

The complete race card for Saturday.