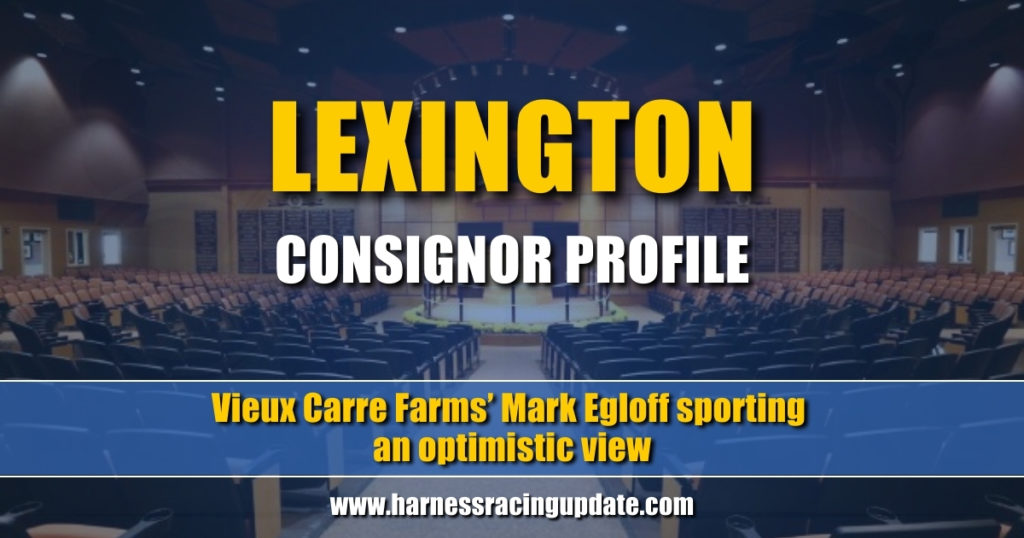 Mark Egloff of Vieux Carre Farms (Gettysburg, PA) is feeling optimistic heading into this year’s Lexington Selected Yearling Sale. He has more than a few reasons to have that rosy outlook.

“We have a nice consignment, including a really nice group of Always B Mikis, Sweet Lous and a Captaintreacherous colt. We’re very happy with the horses we have heading into this sale. I have two special ones that I’m very excited about.”

Those “special ones” should garner some serious interest.

“Don’t Fly Economy (hip 55), is an Always B Miki out of Economy Terror. He’s a half-brother to One Eight Hundred, who we sold down here two years ago for a world-record price for a pacer (Hip 114, $800,000). He’s pretty special. He’s a little bit rangier and a taller colt, more like the Mikis are, but he’s outstanding. I expect him to be well received.”

The bay, bred by Chuck Pompey, Howard Taylor and Edwin Gold, isn’t the only one Egloff is bullish on.

“I have another who I think is extra-special as well. She’s hip 31, (Sweet Amira) a Sweet Lou filly out of Bolt of Thunder. I just don’t know how to fault her. She’s about as nice a yearling that I can remember bringing to a sale. I’ve been doing it for 40 or 50 years, so she’s pretty special.”

Egloff has high hopes for the sale, one that he believes will offer a little bit of something for everyone.

When it comes to tabbing a diamond-in-the-rough, fly-under-the-radar type, Egloff has a few that come to mind.

The first one, a pacer, is part of family tree that is enjoying some record success, courtesy of a veteran broodmare who has produced several standouts over the years, including 29-time winner Malicious, as well as Beach Body, Ms Malicious, Captain Malicious and Silk Purse.

“I’ve got a Captaintreacherous colt (hip 107, Gung Ho) out of Silky that I really like. He’s a nice colt. That mare is getting older (18) now, but she’s just been an amazing mare for us, and the family has heated up big-time here with Sea Silk (Downbytheseaside-—Silk Purse) breaking the world record (1:51.2) for 2-year-old filly pacers at Scioto Downs on September 5. And she just ripped them up at The Red Mile recently (1:50.3, on October 1). She’s a nice one.

“We also have two other ones to sell out of that family. We have a Sweet Lou colt (hip 178, Silk Road) and an Always B Miki filly (hip 346, Ambushed) out of the same Silky family. Those I expect to get some attention too because Sea Silk has really heated that pedigree up again. So, it was good timing.”