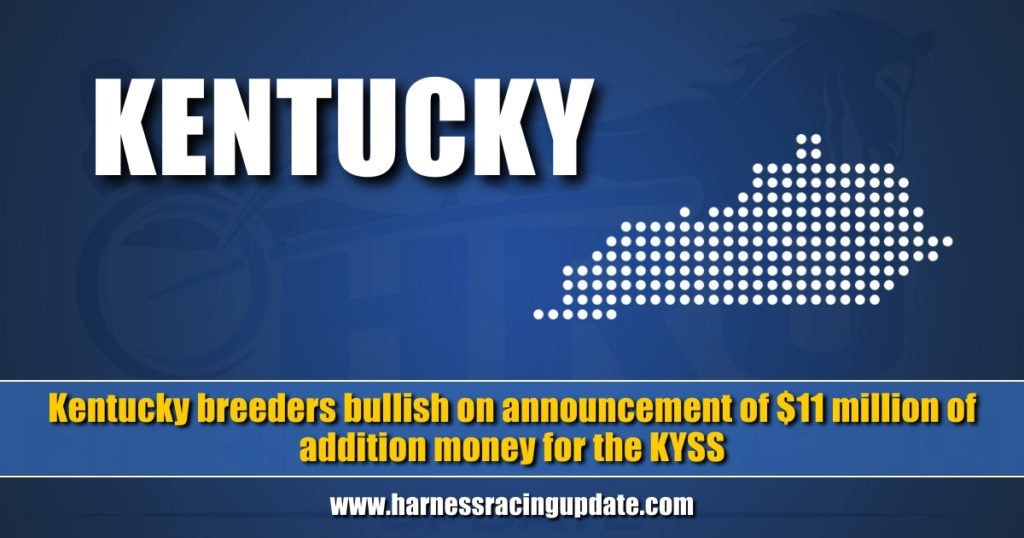 Last week’s announcement that the Kentucky Sires Stakes (KYSS) program will grow by some $11 million in 2022 to a total pot of about $17 million was welcome news for Kentucky Harness Association president Bob Brady, the co-owner of Kentuckiana Farms.

“Everybody is excited about the Kentucky program. It was a hell of an announcement. There’s just such great things coming for Kentucky. We couldn’t be happier about that and it’s already elevating us from other programs because, if you look around now, they’ve just come out with the Jersey Classic, so I think it’s just a boost industry-wide. In particular, Kentucky has really made strides the last several years and we’re ecstatic with the program moving in the right direction forward,” Brady said.

“When you think back for 10 years when we survived only having a couple million in the Sires Stakes, now we’re looking at a $17 million pot and it’s just huge.

“It is a fun problem to have of how to write enough races to spend the money.”

All that said, Kentucky is now simply catching up to many other jurisdictions that have long had programs featuring as much purse money, or more. Most standardbred jurisdictions now have attractive programs.

Still, for those in Kentucky that have tried to survive on limited funds ever since the standardbred stallion industry collapsed in the state, the news was incredibly welcome.

Diamond Creek vice-president Shaun Laungani said the announcement has “really juiced everybody up” at their Georgetown, KY farm.

“People have come to the farm earlier than ever before. We’ve probably already done 20 trainer shows at the farm and we’re still a week away… It’s active and it’s all positive,” Laungani said.

“It’s incredible and I think it might only be the beginning because we’ve still got the third casino in Corbin that hasn’t really kicked in… You could foresee in two years more big increases announced, so like I’ve been telling everyone, ‘Kentucky is where you want to be.’

“We just need to get the Breeders Crown and that would make it complete… and year-round training.”

Brady said the hope is also to encourage some stallions to move back to Kentucky.

Brittany Farms’ Art Zubrod, a Kentucky native, said he’s thrilled to see the revival of the standardbred industry in his home state.

“I’m born and bred here so I’m pretty partial to this state as a place to race horses. In the late ‘90s, we had basically run out of money for the Sires Stakes. We had no income. We went to our fair program and asked if we could borrow $300,000 from them,” Zubrod said. “In those days, they were supplied by the state and the Department of Agriculture kept them afloat. They turned us down and slowly, but surely we started building things up.”

How did the incredible jump in funds happen so quickly? Steve Stewart of Hunterton Farms explains.

“We have all these new racetracks. We’ve got the new racetrack in Oak Grove that’s generating all this money from the slot machines or instant racing,” Stewart said. “The Red Mile has them. All the racetracks in Kentucky do. Churchill Downs built a harness track in Oak Grove, which is in western Kentucky. It opened last October and when it opened we didn’t know how much it was going to generate. Ken Jackson said, ‘Let’s say they bring in a million dollars.’ Well, they brought in $6 million dollars and they are generating $500,000 a month, just for our program.

“The Red Mile is generating between $3.5 and $4 million. We get money from the thoroughbred breeders in Kentucky… you pay a sales tax of six per cent on the stud fees of thoroughbreds and we get 13 per cent of that, which generates another $2 million.

“So, this money in the pile is getting bigger and bigger, dramatically bigger, in a very short period of time. Not only did the new track open last October, but next June they predict there’s another track being built in southern Kentucky that Keenland, the thoroughbred track, is building. They don’t know how much it’s going to generate and we didn’t even put their money into the account for next year.”

Last year, Crawford Farms has added a Kentucky farm to its operation. Michelle Crawford said she simply loved the announcement of additional purses for 2021.

“I can’t be more excited. I know that farms like Hunterton and Kentuckiana were way out in front of it being in Kentucky, but buying that farm for us last year… we have five Kentucky-eligible this year… but next year – in the belly right now we have 100 in-foal mares that are all Kentucky-eligible. Thirty of those are New York-Kentucky dual eligible.

“I think the premium alone on having something that is dually eligible is going to pay for the farm at some point.”

Taking a total industry view, Blue Chip Farm owner Tom Grossman said the Kentucky news is, “certainly a double-edged sword for a lot of people. Net, for the industry, it should be only positive. It swings the competitive balance for stallions and mares, but it layers a lot of new money on top of what everyone else has so, overall for the business, it’s going to be great.

“But, putting my sales cap on, people always look at the top number of how much more there is to race for, but they forget how many more Kentucky-breds there are going to be. It’s the same thing we’ve said in New York. The top line money doesn’t look glowing like Pennsylvania or Kentucky, but there’s so few New York-breds to race against that I think it’s a better risk-return and it’s going to become even more so because for sure there’s going to be a lot more Kentucky-breds in the future.”

As for Grossman’s fellow New Yorker, Michelle Crawford, she has fallen more deeply in love with Kentucky.

“The grass is always green. They have amazing grass in Kentucky and then they get to race at The Red Mile. I don’t think there’s a better recipe. I really don’t,” she said.