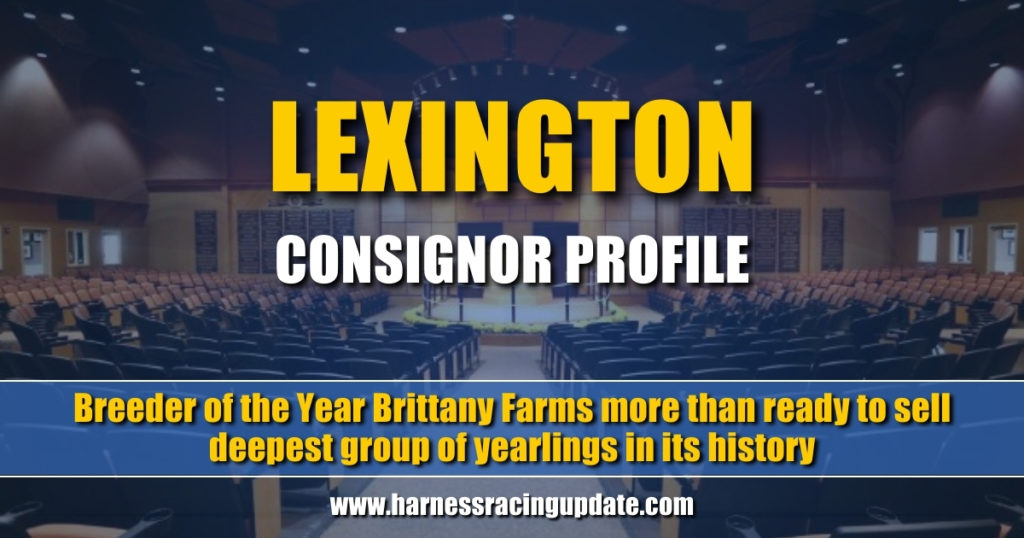 Art Zubrod said the yearlings two-time reigning Breeder of the Year Brittany Farms is selling in Lexington are more than ready for the sale to begin — perhaps, too ready.

“It’s the deepest sale we’ve had,” said Brittany’s veteran farm manager. “We’ve got 25 yearlings and there’s not one of them that I wouldn’t stand behind or recommend to somebody. Just a really, really good crop this year.

“I’m just wishing that they would’ve had the sale two weeks ago – they were so ready and now a couple of them are getting cranky on me poking at them and chasing them.

Zubrod then rattled off a number of yearlings he thinks will sell particularly well.

“Pacing colts, we’ve got a brother to Pebble Beach (hip 258, Cabot Beach). Studio Girl’s yearling is hip 341 (Captain Van Gogh) and that’s another Captain. Hip 20 (Seashell) is a sister to Blue Diamond Eyes. Hip 159 (Diamondsnpearls) is a real special filly. The Bettors Delight hip 260 (Star So Bright), I like a whole lot.

“On the trotting colts, Hip 19 (Novel) is a Father Patrick and he is as handy in the paddock as any horse I’ve ever raised. By handy, I don’t mean he’s the fastest I’ve ever had, but just hardly ever makes a break no matter how hard you chase him. He just goes around the turns and he’s a horse that’s still liking it. That’s always been my test, when a horse has been shown out in the paddock 10, 12, 15 times and he likes it just as much the last time you showed him as the first time. Bettors Wish was like that and that’s what make me fall in love with Bettors Wish. He loved going out and showing off for you.

“I have two pacing fillies, Hip 444 (Freshen Up) and 612 (Bettors Passion), and oddly enough they are both Bettors Delights. They’ve matured extremely well. Number 612 would not have been a 612 if I knew what I know today. She was very immature and didn’t seem to be interested in doing anything right, but she’s got a great groom here at the farm and she loves going out in the field and showing off.

“Then, the other one, Freshen Up, is the same thing. She’s matured so well. She’s probably overall the best horse in the paddock. We talk about attitude, gait and speed, she’s got all three of those.”

As for a value pick, Zubrod said there is an interesting story about hip 364 Morning Edition.

“He’s a Walner out of Morning Glow. He was destined, if you look at him, to be a $400,000 yearling. He lost an eye shortly after he was born. He still looks the part. He trots the part in the paddock and most of the… he’s getting a lot of x-rays, let’s put it that way. That’ll tell you how much interest there is in him.

“He’s not going to sell for what he should’ve sold for, but I think he’ll still have a nice sale. He could be anything, he’s very sharp. I just showed him 10 minutes ago.

“He’s a really nice horse. He wasn’t spoiled, but he’s very friendly, very willing. Whatever you want him to do, he’s happy to do it. He doesn’t know that he has one eye, because he basically… probably six weeks after he was born he lost it. He had an infection and we thought that we had it coming our way and we were treating him probably five or six times a day, all through the night and everything. Just one day, it basically exploded.”