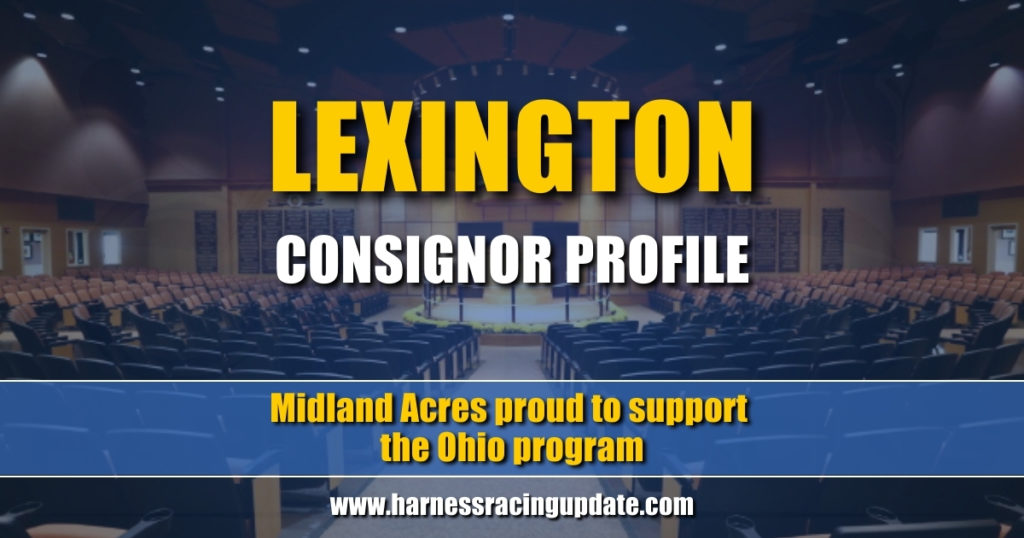 Dr. John Mossbarger and his family have bred horses in the Buckeye State for half a century. This week, Midland Acres brings to Lexington a consignment of nine yearlings from several different sires. Based on the results of other sales, he anticipates a good showing this week, even if a larger catalog may impact the sale average.

“We’re looking forward to this sale. I don’t know how the average is going to be because they are selling close to 900 head, which is more than they usually do. Hopefully we aren’t flooding the market,” he said. “But the sales have been good this year. The Ohio sale was good, and I think this sale will be good.”

Mossbarger noted two yearlings that stand out in the consignment, one of which is a sibling to a Hambletonian champion. The other is a Muscle Hill colt that is a brother to Duchess Dynamite, a Muscle Mass filly that sold last year at Lexington for $30,000.

“The two would be the brother (hip 86 Landing Strip) to Pinkman that won the Hambletonian. He sells Tuesday night along with a Muscle Hill colt (hip 101 Sir Strong) out of a mare named Royal Intrigue. Those are our two highlights. The pedigree is probably the biggest thing and the first crop of Tactical Landing, and of course the premier sire Muscle Hill. It’s a second foal out of the mare. Unfortunately the first foal never raced. We sold her down there last year. That will put a little dimple in him.”

Midland Acres also will offer fillies by Southwind Frank, Always B Miki, International Moni, All Bets Off and Heston Blue Chip. The consignment includes a Rockin Image colt. The Bloomingburg, Ohio-based breeder’s offering isn’t stacked with yearlings sired by stallions from other states, and that is by design.

“Our bread and butter is in Ohio. We don’t breed that much outside. It’s very difficult to have the broodmare band to compete with Diamond Creek and Brittany. It’s tough to compete with them,” Mossbarger said. “We’re just a family farm and we’ve been at it 50 years, but we’ve always catered to Ohio. What we make on the farm is from the horses. We don’t have any other revenue coming in to keep the farm going.”

Mossbarger, like other consignors, will take note of activities on opening night and the tone it will set for the remainder of the week. But he also focuses on other indicators when determining the strength of the sale.

“Everybody talks about good numbers. That’s usually in the eye of the beholder. Will it increase? The total dollars may increase, but the average may not increase because they are selling more horses,” he said. “I think it is important to look at the median along with the average. I go more by the median than the average to see how strong the sale is.”

“The value pick would be maybe the International Moni out of My Baby’s Mama. It’s the first crop of International Moni. Hip number 515 (Mommas A Diva). She’s not real big, but the mare has done her job,” Mossbarger said.