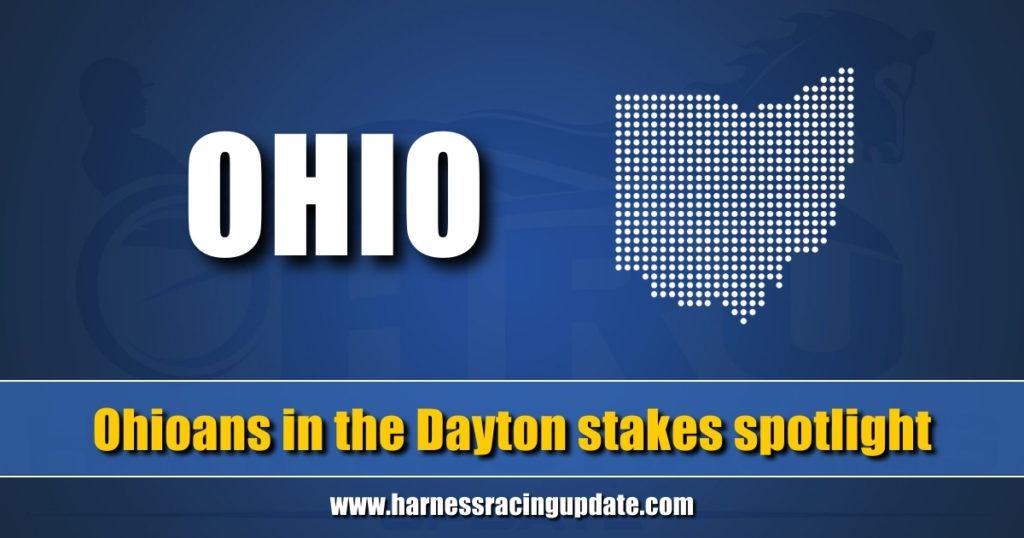 Ohioans in the Dayton stakes spotlight

On Saturday, Hollywood Dayton Raceway plays host to Dayton Derbies and Ohio Sires Stakes consolations, $1.1 million is up for grabs.

Hollywood Dayton Raceway opened for its eighth season last Friday (Sept. 24), but they waited eight nights to celebrate with a $1,184,000 card set for Saturday (Oct. 2). Headlining the 14-race menu are a trio of $175,000 Dayton Derbies and Ohio Sire Stake Consolation events.

The trainer/driver combo of Christi and Dan Noble will send Ocean Rock (3-1) out as the second morning line choice.

Sandra Burnett of nearby Xenia, OH, owns and bred the 4-year-old gelded son on Rockin Amadeus, who has earned $817,622 lifetime.

“He came out of the Hoosier Derby extremely sharp,” said Christi Noble. “We expect another strong performance Saturday. He’s really rounded into top form at the right time.”

Catch The Fire has turned his attention solely to racing after pulling double-duty – breeding and racing – for the first portion of the year.

“Catch The Fire is in good form, I’m really happy with last week’s race with having the 10 hole I thought he raced super into a somewhat slow half coming first up,” said Todd Luther. “Scotty (Zeron) has options of what to do when gate folds with speed on the inside and outside this is a great field of horses. I know Fire will give 110 per cent as he always does and expect him to be right there at the wire. We are using derby for a prep for Lexington.”

Chief Mate, who was a $220,000 purchase at the 2021 Tattersalls Winter Mixed Sale, has picked up just under $100,000 on the season for the Reynoldsburg, OH based owner. Chief will get the ultimate equipment change.

“He’s been a little off his game with fighting some sickness issues,” said Luther. “Greg and I decided to geld him after his last start and he has been training great. With a little time off, I look for him to be back to his old self this week.”

The final Ohio-based contender is Gold Digger King (David Miller). Linda Van Camp owns the five-year-old Pet Rock gelding. Scott Mogan trains the lifetime earner of $418,237, who has made 61 of 62 career starts in the Buckeye state.

Forbidden Trade, a winner of half of his 40 career starts, comes into the ‘Derby’ off two solid performances – a win in the $210,000 Caesars Trotting Classic at Hoosier Park (Sept. 25) and a second-place finish in the $436,800 Maple Leaf Trot at Woodbine Mohawk Park (Sept. 4).

Trainer Nancy Takter will send out a trio to challenge, including Manchego, Ready For Moni (Andrew McCarthy) and Sorella (Yannick Gingras).

The 6-year-old Muscle Hill mare Manchego spent most of the summer as the top ranked horse in the Hambletonian Society/Breeders Crown poll until a couple of poor performances and breaks in stride in the Armbro Flight (Sept. 17) and the Maple Leaf Trot.

The hottest horse in the older mare trot division may be When Dovescry. The Brett Pelling trainee has a three-race win streak which includes the $116,000 Ms. Versatility Final at Delaware (Sept. 23) and the $184,070 Armbro Flight.

Lyons Sentinel is the overwhelming favorite in the Distaff Derby. The 4-year-old daughter of Captaintreacherous has won six straight and was recently tapped as the top horse currently in North America. She has earned $1.7 million lifetime for Threelyonsracing.

The 2-year-old filly trot will feature three fillies that are coming into the consolation final in great form.

Reichers Caviar (David Miller) and I’ll Annie Up (Chris Page) each won divisions of the $124,000 (div) Ohio Breeders Championship in their last start (Sept. 22) at the Delaware County Fair.