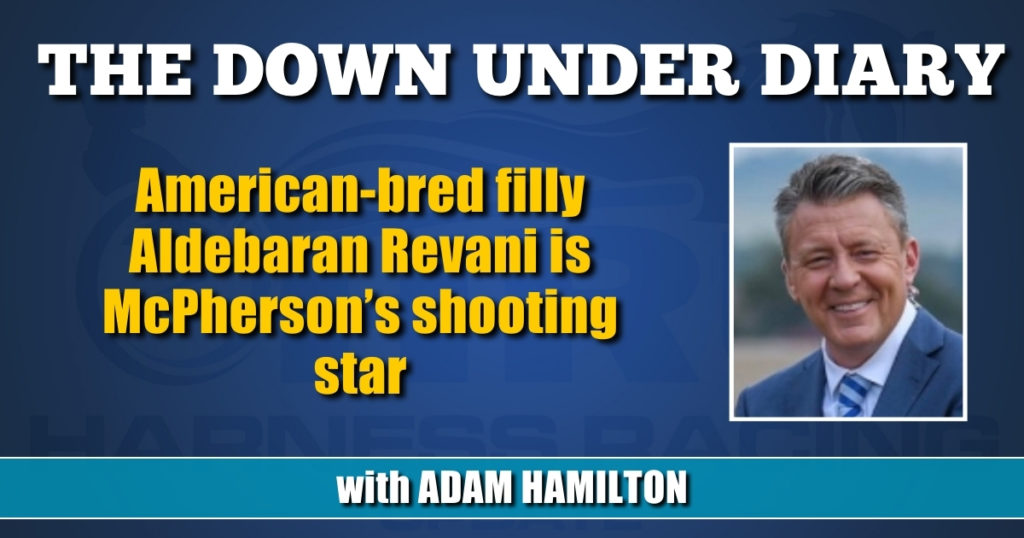 Duncan McPherson thinks his filly is capable of going to the gate in Down Under’s biggest trotting race the Great Southern Star, a race he helped create.

That 7-month-old filly he first spotted at Millstream Farm’s New Jersey property back in late 2017 and later bought at the Harrisburg sale is now one of the fastest and most exciting trotters Down Under.

Aldebaran Revani, a daughter of Donato Hanover out of the well-performed Cantab Hall mare Coffeecake Hanover, has blazed her way to five successive wins (from just six Aussie) starts, including a 1:53.9 mile win at Menangle at her most recent race on Sept. 18.

Conservative in his comments until now, McPherson, the man behind the huge Aldebaran Park trotting operation and one of Australia’s real crusaders for the trotting gait, admitted the biggest trotting race in this part of the world, the Great Southern Star, was now on the table.

“I’m pretty excited. She flies the gate, she’s doing things under her own steam and she’s got gears… very, very high speed,” he said.

“She left the gate from out wide (barrier nine) in :26.5 the other night and that’s with (driver) Jack (Callaghan) easing back off her in the last bit of the opening quarter. She could break :26 I reckon.

“She’s only had 16 starts, 10 of those in the U.S., and she’s five of her six here (Menangle). She’s the fastest trotter in Australia this year.

“All of this while she’s still becoming an Australian horse. She’s still half American. Her coat’s not right yet, she’s still acclimatising. She only got here last December.”

McPherson said he would leave the race planning to trainers Luke and Belinda McCarthy, but feature sprint races like the Group 1 Aldebaran Park Maori Mile at Bendigo in January and the Great Southern Star (a heat and final series on the same night) in February looked ideal if Aldebaran Revani keeps progressing.

“There’s another couple of mile races at Menangle for her in October and it’s really about getting her more experience now, we know the speed and talent are there,” he said.

The pathway to buying Aldebaran Revani came when McPherson, Jim Connelly and trainer Chris Lang bought a trotter by Chocolatier they called Kyvalley Blur back in 2009. He proved hugely successful, winning 30 races and $A611,790 in Australia.

“A few of us have been in lots of horses together since and Jonas is our trainer. We’d get back over two or three times a year to see them race and that’s when I saw this filly,” McPherson said.

Aldebaran Revani didn’t race at 2 and her 10 starts at 3 netted two wins and three placings, but she was very headstrong – she still seems to be – and wanted to do things her way.

“Jonas really liked her, always said the speed and potential was there, and my plan, a dream really, was to bring her down here after her 3-year-old season, which we did last December,” McPherson said.

“She had four months of jogging and acclimatisation at Aldebaran Park where Belinda and Danny Thackeray did a great job with her, then I rang Luke and Belinda (McCarthy) to ask if they’d train here. Andy (McCarthy, Luke’s brother) had driven her in the U.S., plus Luke and Belinda are great trainers and Menangle was the place for her to race because of the mile racing.

“Given how far she’s come so quickly and the fact she’s sound as a bell and doesn’t race in any gear, who knows what the next couple of years might hold for her.”

“Oh, wow! That would be beyond comprehension. You know how much that race means to me,” he said.