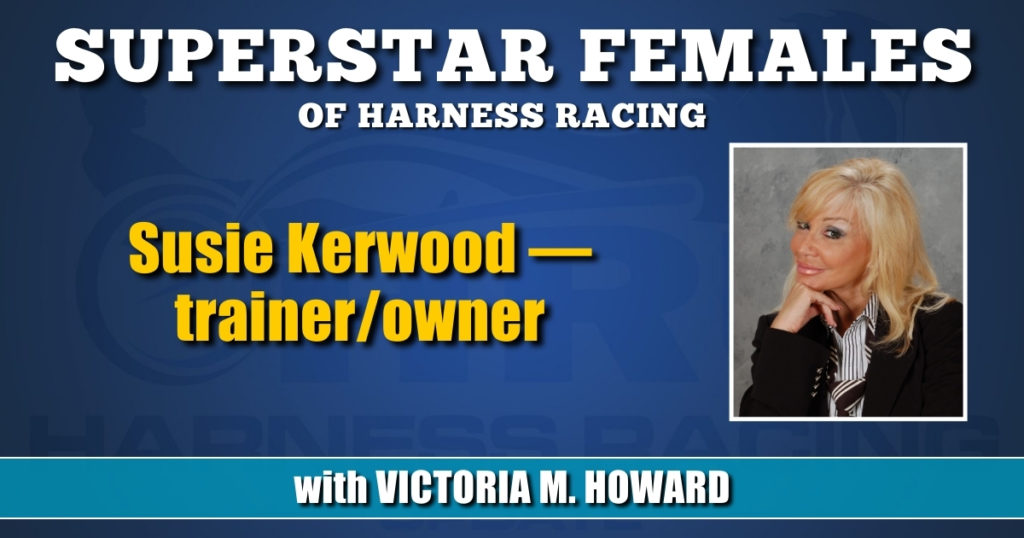 Susie Kerwood grew up on her family farm, which was located in Malmo, Sweden. Her father, Joy Persson, was a trainer and breeder, as well as a driver that competed in amateur races.

At 13, Kerwood bought her first pony — a trotter named Lady Ballerina that she trained and drove in the pony races in Sweden.

When she was 20, Kerwood came to America with five other young women and got a job working for Skip Lewis at Ben White training center in Orlando, FL.

“I always loved the business and horses, and my dream was to learn enough to one day go out on my own and become a trainer.

“I worked for Skip Lewis for about nine months until summer training was over. I wanted to go to Pompano Park to work so I got a job with trainer Bob Roberts there.

“A few of the girls that came from Sweden with me decided to go back home, but Karin Burgess (Blair’s wife) decided to stay in the States with me.

“After working for Bob Roberts, I got a job with Jerry Silverman at the Meadowlands.

“I learned a lot from each trainer I worked for, although they each had their own unique personal way of training.

“I have discovered that every trainer has a certain way of training a horse, and with the people I worked for, there was no right or wrong, for they all were successful trainers.”

This is so. Although the basic foundation in harnessing a horse is still the same (ex.: all horses wear a harness, bridle, etc,), each horse is different and may require something added that another horse might not need. (ex.: a shadow, roll, peek-a-boo-bridle, various mouthpieces or bits).

And shoeing a horse, well, that’s a science all in its own. As the saying goes, “No hoof — no horse.”

So a good trainer, along with his or her blacksmith, will decide what type of shoe is best for that horse. Some horses are narrow in front and may hit their knees, so the blacksmith will shoe them to widen them to keep from hitting their knees.

In Sweden it is not uncommon to see horses race without shoes (or half-shoes). This has recently been observed in the States; such as trotters Father Patrick and Trixton who both went to the gate wearing cut-off American made Thoro-Bred Queen’s Plates with Flapper pads.

Racing barefoot is not a standard practice in harness racing, but it’s not unusual. Captain Corey won this year’s Hambletonian while racing barefoot.

So you see, there is so much more than just hooking a horse up to a harness and bike and calling yourself a trainer, for every horse is different, and knowing what your horse needs is what separates a ‘good’ trainer from an amateur.

Kerwood certainly has had her share of good horses, for she’s trained AMBRO TEMPLE (earned almost $500,000 and held the track record at Balmoral for almost 15 years), among many more.

“MERRY RULES won the Canadian Breeders at 2, as well as LAST FLIGHT OUT. And they both won on the same night!

“I also trained MAPLE SUGAR, who won the Casual Breeze and EMERALD WHISPER, who was a really nice filly that won a lot of the OSS (Ontario Sires Stakes).

“Then there was DUDESALADY, who also won a lot of OSS and was victorious in the Grassroots final; JULA SHE’S MAGIC who won the OSS Super Final; and WILDWOOD EXPRESS, who won the Champlain elimination in Campbellville.

“Last year I had BETALADY, who was a Gold winner; and SUSIES LADY — an OSS winner — and I’m sure I’m leaving out a few.

“The best horse I’ve trained is ARMBRO TEMPLE — who also happens to be my all-time favorite — but again, FLANAGAN MEMORY is right up there with him.

“When I was a caretaker the best horse I took care of would be SIMPLY RAVISHING.”

Dion is a horseman who recently drove a horse to victory for the first time since his last start in 1994. The horse was 2-year-old trotter PROMISE FOR LIFE, a Royalty For Life colt who won wire-to-wire in 2:01.4. Dion is no stranger to winning, for the Acton resident has won 140 races out of 1105, and was the trainer for SHOWER PLAY and FLANAGAN MEMORY, who won the 2016 Breeders Crown Open Trot.

“Rene and I train together at our own farm that is located just north of Acton — 30 minutes from Mohawk Raceway. Training in Canada in the winter can be quite challenging, but we try to put a lot of miles in the 2-year-olds to get a good foundation; and when the weather breaks and starts getting better, we start putting speed to them.”

What does Kerwood look for when purchasing a horse?

“When I go to a sale I first look for a good page on an individual. There are a few things I like in a trotter – which are different than what I like in a pacer. But usually the ones I really like, I can’t afford,” she said, laughing.

From training her pony, Lady Ballerina, in Sweden to becoming an esteemed, respected, female in the sport, Kerwood has attained her goal of becoming a successful trainer.