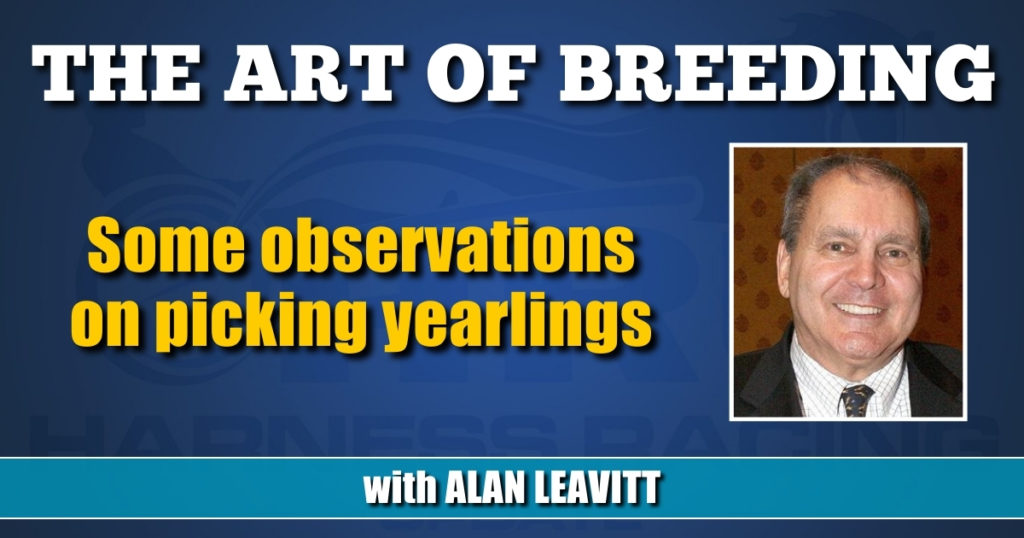 Some observations on picking yearlings

The yearling sales season is upon us, and over the course of a few days in Lexington and Harrisburg, the kind of success or failure you’ll experience next year on the track will be determined. This kid doesn’t pretend to have all the answers to picking yearlings, or even most of them, but I do have some observations.

The selection process starts with the written word, the sales catalog. Here, a personal complaint. Today’s standardbred sales pedigrees ignore the most important single element, the sire. He rates no attention on the yearling’s pedigree page, even though the sire is the most vital concern when appraising a yearling for possible purchase.

By contrast, thoroughbred sales catalogs devote a large paragraph to the sire on every pedigree page. Which is how it should be.

Evaluating a sire usually is a popularity contest. A stud with a headliner or two is automatically in demand, even though his percentage of stakes horses is low. The horse you want is one who consistently sires “good horses,” i.e. fast, sound, level headed trotters or pacers.

By contrast, rather than paying a million dollars for a full-brother to Greenshoe, that money would have been better invested in lottery tickets. The reason being that Greenshoe was like a bolt of lightning, incredibly fast, close to being uncontrollable, and something we had never seen the likes of before and may well never see again.

Which doesn’t mean that he can’t be a great sire. Here it’s a question of whether his genotype, his genetic makeup, matches up with his phenotype, which is the visible horse, i.e. a racehorse sans pareil. That, only time will tell.

Sire stakes do play an important role these days, unless you’re rich enough to be swinging for the fences when you make the last bid. A good example of such a buyer is Serge Godin, who races under the nom de course of Determination. M. (for Monsieur) Godin, as he is properly known in French speaking Quebec, spends freely, but wisely. He has a top private trainer in Luc Blais, one of the best drivers in the business in Bob McClure, and every fall the yearlings he buys produce at least several stakes winning colts and fillies. The best product of their method so far is the Hambletonian winner, Forbidden Trade.

By contrast, there are a few others who flamboyantly spend a great deal of money and come up empty when the big stakes are raced. Money alone has never spelled success in the horse business, and it never will.

In any case, after you’ve decided that a certain yearling’s sire gives you a reasonable shot at success, you consider the dam. Here, an important consideration, if it applies, is the genetic makeup of a yearling’s pedigree. It doesn’t occur frequently, but if a colt or filly does happen to have two close crosses to the same horse, mare or stallion, that’s inbreeding, and something to jump on.

Back in the Ming Dynasty, Jim Harrison bred Romola Hanover to Dancer Hanover three times, because he was inbreeding to the great sire, Hal Dale. The result was three great, stakes winning pacers, the colts Romeo and Romulus Hanover, and the filly, Romalie Hanover.

Interestingly enough, none of the three looked anything like each other. Romeo was small, Romulus was big and Romalie, the filly, was a bay as opposed to her two chestnut brothers.

But you find that kind of inbreeding about as frequently as you see a blue moon, but it always pays to look. This kid’s first maxim re dams is to largely discount any great things she might have done on the track. There is no connection between a mare’s racing success and a mare’s ability to reproduce the qualities that made her great on the track.

Again, here I go with the genotype and the phenotype, but you have to understand what they are as two entirely separate entities in every standardbred. Which I know everyone will blithely ignore, and those with big bank accounts will pay lots of money again this fall for the sons and daughters of great race mares. And after paying big training bills and thousands in stake payments you wind up with a ten claimer, don’t say I didn’t warn you.

Evaluating a mare’s productivity is easy. If she has consistently produced good horses by more than one sire, she’s what you’re looking for. Of course, many mares are just starting out, and they have very few, or maybe no foals of racing age. So all you can go by is the quality of her pedigree, which means you want second, third, and fourth dams who have produced well.

You will seldom find a good producing mare from an otherwise cold family. If that’s the case, however, accept it at face value. We had a mare that we leased at Lana Lobell who was fairly cold blooded, but she clicked every time with Speedy Crown. Then she went back to her owner, and he bred her to a local stud in Michigan. That foal was also a stakes winner, because the mare was prepotent.

In my example of a horse’s genetic range as a deck of cards, this mare was blessed with only face cards and an ace, so she could be bred to any horse and come up with a high average of the two cards, hers and the stud’s, so the result was a good horse.

Finally, there’s the yearling him or herself, and that’s the most important piece of the puzzle. Clearly, you want a yearling that stands right, i.e. not toeing in or out. Howard Beissinger, who was a truly great horseman, liked a fairly short cannon bone, in front, and a pastern that didn’t have too much of a slope.

With trotters, they always should have a longer body than their height, as measured at the withers. The great Swedish horsemen, like Soren Nordin, carried a measuring stick and checked out every yearling they looked at. Any trotter who doesn’t properly meet that equation is guaranteed to interfere.

Any yearling should have a nice, sharp head, and a large expressive eye. You like to see a sharp-eared horse, which bodes well for his disposition and quick learning ability. It is a fact, however, that we’ve somehow managed to breed long ears into our American trotter, but you still want him to use them in a curious, alert manner.

It should be axiomatic to have a vet take radiographs of all the 30 important bones and joints. No matter how low the potential price range is of any yearling, it’s simply well worth the few hundred dollars to get a yearling x-rayed before you start spending good money.

Videos are important, in that they will show you how a yearling travels. Obviously, you want a horse that goes straight, neither coming in with a foot toward the opposite knee, or winging out, which is inefficient. If at all possible, try to see a yearling turn out in a paddock, where he can trot around naturally. Every good horse this kid ever raised could burn in the paddock.

So, that covers the basics of yearling buying, with the proviso that it is, at best, an inexact science. Although it may not be politically correct today, the most important single consideration was articulated to me a long time ago by Curly Smart, “Bub,” he said, “That yearling you buy should just jump up and fill your eye. Just like a pretty girl does.”