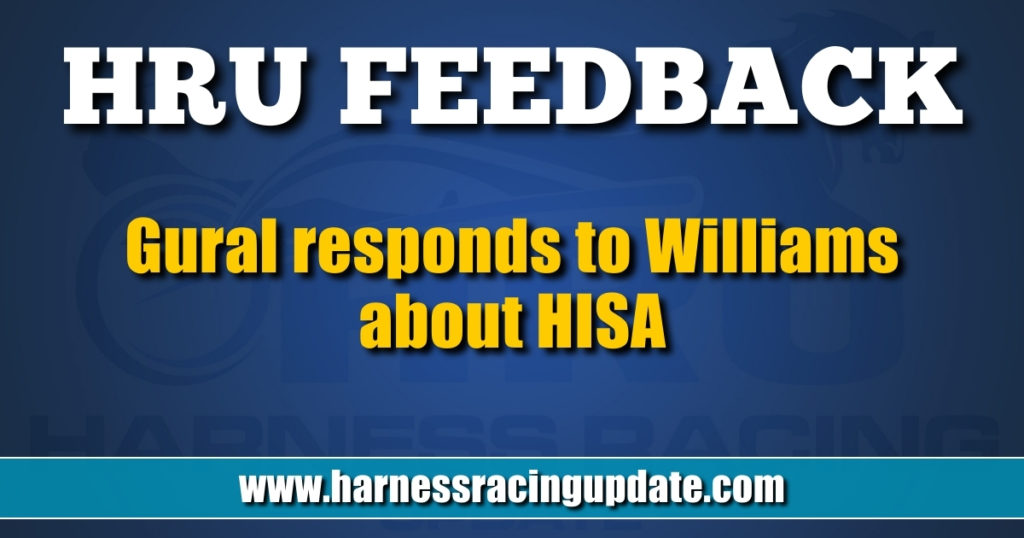 Gural responds to Williams about HISA

I hate to beat a dead horse but the information that Russell Williams is putting out on the USTA website (full story here) is totally incorrect.

While it is true that members of The Jockey Club were anxious to get rid of the drugs, the only reason the legislation passed was that Bill Carstanjen, CEO of Churchill had a close relationship with Mitch McConnell and persuaded him that the drug problem in horse racing was widespread and that the states were incapable of regulating it. McConnell’s office helped revise the legislation to insure that it was constitutional and eliminated the standardbreds because they knew the USTA was going to oppose it.

Bill Carstanjen is not an elitist. It then became my job to get it passed in the House because of my close relationship with Nancy Pelosi. I was able to get her to include it in a monstrous year-end bill that included just about everything. I do not consider myself an elitist.

If the USTA succeeds in getting legislation overturned, which I think is a longshot, we will be back to where we are now with each state promulgating their own regulations and making a minimal effort to catch the cheaters. Basically, the USTA is essentially advocating for the status quo because that is what you will get if they are successful. We know from signatures of support from almost all of the major owners and breeders in our sport that they are in favor of this legislation. The legislation the USTA is proposing will never pass because the Feds will simply throw up their hands and say, ‘We have more important things to deal with. If these guys want to drug their horses so be it.’ We have a big advantage because the thoroughbreds will be guinea pigs for us and we can see how it works before deciding if we want to opt in or not. I have no idea why the USTA is spending so much money to achieve a goal that almost all of us would be unhappy with other than those people who continue to use drug trainers. We all know who they are and most tracks make little or no effort to keep them out. Hopefully, when more people are arrested and some of the people who have already been arrested plead guilty and go to jail it will show how the USTA’s opposition is mind boggling.