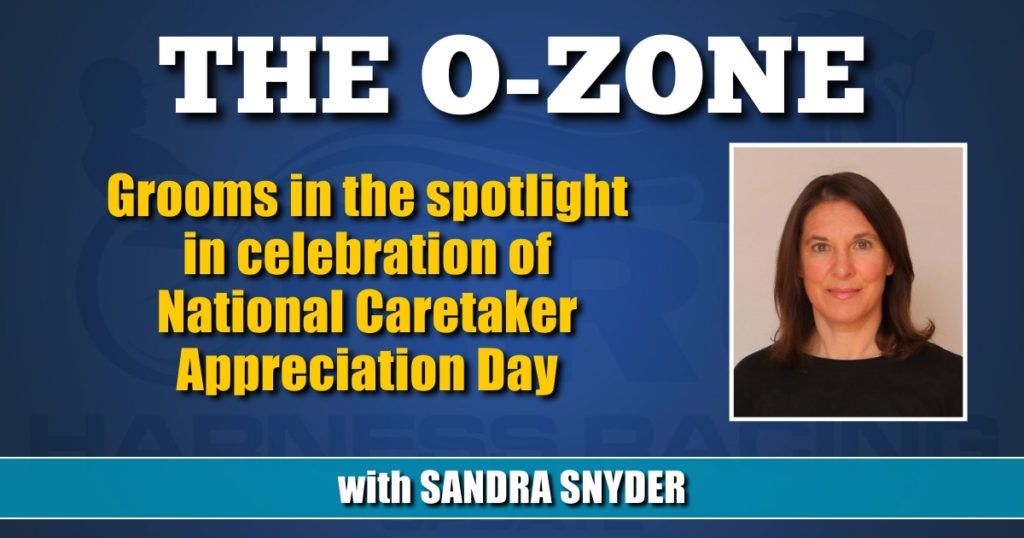 Grooms in the spotlight in celebration of National Caretaker Appreciation Day

Racetracks across Canada are playing host to a National Caretaker Appreciation Day this week, honoring the hard work of their local caretakers with special meals, gifts, prize draws and more. In Ontario, the events will take place at Kawartha Downs on Saturday (Sept. 25) and at Flamboro Downs and Leamington Raceway on Sunday (Sept. 26). Earlier this week, events were held on Wednesday (Sept. 22) at Grand River Raceway and Thursday (Sept. 23) at Woodbine Mohawk Park.

In honor of the fourth annual event, trainers Richard Moreau, Carmen Auciello, Gregg McNair and Blake MacIntosh, who are currently ranked first, second, sixth and 10th in the nation, helped put the spotlight on some of the invaluable members of their team.

Office manager Louisa Surette describes the environment at the McNair Stables as family-like, and like any proud parent, Gregg McNair was unable to single out one member of his team for recognition. As a result Surette, Christine Lawrence, Nancy O’Hagan, Vicky Cayer and Susie McNair took 30 minutes out of their morning on Tuesday to share their secrets for a successful career in harness racing.

All four acknowledge that being a caretaker is not for everyone. A passion for horses and harness racing is a must, and in the McNair barn a good sense of humour is essential. As Cayer talked about the connection she forged with Swift Alley in her first year with the team, her co-workers chimed in with affectionate jibes about how the now 5-year-old mare runs away from her in the paddock.

One of the youngest members of the team — aside from D. J. Lawrence, who officially joined the staff this spring after spending his childhood following his mom around the barn — Cayer noted that since she started working with horses she has learned as much about herself as she has about harness racing.

“It did help to find out a lot of sides of my personality I didn’t know, and make me work on myself way more than every other job I have been in,” said Cayer. “I think it made me grow up and made me see a lot of my personality.”

Each day, the group works together to get all of the horses exercised and then spends time attending to the unique needs of the horses currently assigned to their care. They all have favourites, both past and present.

“Going back a long time ago, Run To The Bank was my favourite horse,” said O’Hagan, who has been working with McNair since the late 1980s after running her own stable for a number of years. “He was my favorite, you couldn’t beat old Red. And then I would have to say, more recently, I took care of The Rev, he was a really good horse, and right now Century Heineken is my favourite.”

The team approach also extends to cheering on the stable’s horses, like pacing mare Karma Seelster and Century Heineken, who are headed to Woodbine Mohawk Park on Saturday, Sept. 25 for the $240,000 Milton Pace Final and a $155,600 Ontario Sires Stakes three-year-old pacing colt Gold Series Leg.

“It’s just a big team effort. If you don’t look after it day-to-day you still cheer for it,” said Lawrence, as O’Hagan pointed out that summer stakes success seeds the fall yearling sale fund. “Exactly, it goes right back into the pot for next year.”

Always-on-the-go Susie McNair said their shared passion for horses and affection for each other has created an environment where the horses thrive and the people genuinely enjoy coming to work each day.

“I look forward to coming to work every day, I really do, except of course if it’s snowing,” said McNair with a laugh. “Then I want to be in Florida. I’m spoiled with that, as well. It will be our 10th or 11th winter this fall when we go down.”

Cayer and Ron O’Neill typically make the trip to Okeechobee, FL with the McNairs each winter, while the rest of the staff stays home to keep the Ontario operation humming along.

Emelia Gillespie got her start in harness racing through an equine program in Sweden that offered an opportunity for a work placement in the United States. That experience was the start of an eight-year stretch working as a caretaker in the U.S. before she made the move to Canada. After knowing MacIntosh for a number of years, Gillespie joined his staff three seasons ago and said it will likely be her final stop as a caretaker.

“Blake is a great boss. He’s temperamental for sure, like everyone knows, but as a boss he is fantastic. He’d give his shirt off his back for us,” she explained. “If I were to do something else I would never go to another trainer. If I quit it would be to do something different.”

Like her peers in the McNair barn, Gillespie said a career as a caretaker resembles a calling more than a job and she dedicates countless hours to the horses in her care, including 2-year-old trotting filly Clockwork Orange, who was a Grassroots winner on Sept. 21, and personal favourite Fast N First, who was the sophomore pacing colt Grassroots champion and Little Brown Jug runner-up in 2019 and is currently recovering from an injury.

“I can’t even stay away on a Sunday. Even if it is not my Sunday to work I still come in because otherwise I sit at home and stress. I’d rather just come in and check that everything is okay because it’s like your kids. I don’t have kids and I don’t want any, so this is it,” said Gillespie, who is married to Woodbine Mohawk Park assistant race secretary Jim Gillespie. “People outside the business are always like, ‘Oh well you’re working on a holiday.’ Yeah, but it’s not work though, it’s my life. I picked to do this. You’ve got to love it. That about sums it up I think. You’ve got to love what you do.”

As a child growing up in northern Ontario, Michelle Olson used to tell her parents that she wanted to be a jockey when she grew up. The Peterborough resident has not ticked that box on her horse racing resume yet, but she does exercise Quarter Horse racehorses, holds her standardbred trainer/driver license and is an owner and breeder.

She has worked in the Carmen Auciello stable for about five years and there is not an aspect of harness racing that she has not embraced with enthusiasm.

“I like the variety of it all. If I was just to groom horses only, I think I would probably get pretty bored of that. I like to keep my mind very active on all ends of it,” Olson said. “I love driving horses, I love babies, I like getting connected with horses in the barn and I like going to the track, so I kind of like most of it to be honest.”

Long-term Olson would like to operate her own training business and is soaking up all the opportunities to learn that Auciello’s sizeable operation provides. With barns in Port Perry, Guelph and New York the stable door is a revolving one, offering a wide variety of horses to work with and problems to solve.

“It’s a very, very fluently run business and it almost takes the guess work out of it,” said Olson. “I’m just grateful for all the opportunities I’ve come across.”

Olson currently owns two horses that she works on alongside trainer Roger Ferguson, who introduced her to harness racing in 2009, including Slim Shady, the first horse she took from the foaling shed to the winner’s circle.

After graduating from the equine program at the Institut de Technologie Agroalimentaire in La Pocatière, QC, Sandra Perreault intended to pursue a career as a trainer. As she gained experience she realised that working as a caretaker was a better fit for her personality and she has spent most of the last three decades plying her trade across North America.

“Later on, I found out maybe that’s not really what I want. It’s too much going on, too much pressure dealing with the owners, and I didn’t want to do that,” said Perreault of her original goal. “For me, horses, that’s my life. It’s so fun to be around them. It’s also an outside job, me I don’t like to be in an office. You’ve got to love the horses though, because it’s a lot of hours.”

Rather than hanging out her own shingle, Perreault opted to purchase shares of horses in the stables where she worked and in recent years she has owned and trained a horse of her own alongside her duties in the Richard Moreau barn. At present she is campaigning five-year-old Sunshine Beach gelding Excaliber Seelster in the claiming ranks at Woodbine Mohawk Park and among her all-time favourite horses is 11-year-old pacing gelding Oakrock Eldorado, who she claimed and lost in 2020.

Among Perreault’s current charges for Moreau is pacing mare Lit De Rose, who will face off against Karma Seelster in the $240,000 Milton Pace Final on Saturday. She also cares for 6-year-old pacing geldings Real Surreal and Stelios and three-year-old pacing filly Windsun Gaga, who will compete in the Prospect Series Finals at Grand River Raceway on Friday, Sept. 24.

“I’d rather take care of babies than racehorses, but at Richard’s he doesn’t have that many babies. He has more racehorses and claimers,” said Perreault. “A lot of grooms don’t like it, it’s more work and you’ve got to teach them everything and it’s different, but I like working with babies.”

Whether they are teaching young horses the ropes, working to keep stakes horses in tip-top shape or nursing a veteran campaigner through an injury, Ontario’s caretakers are the engine that keep the industry moving. They have our heartfelt thanks.