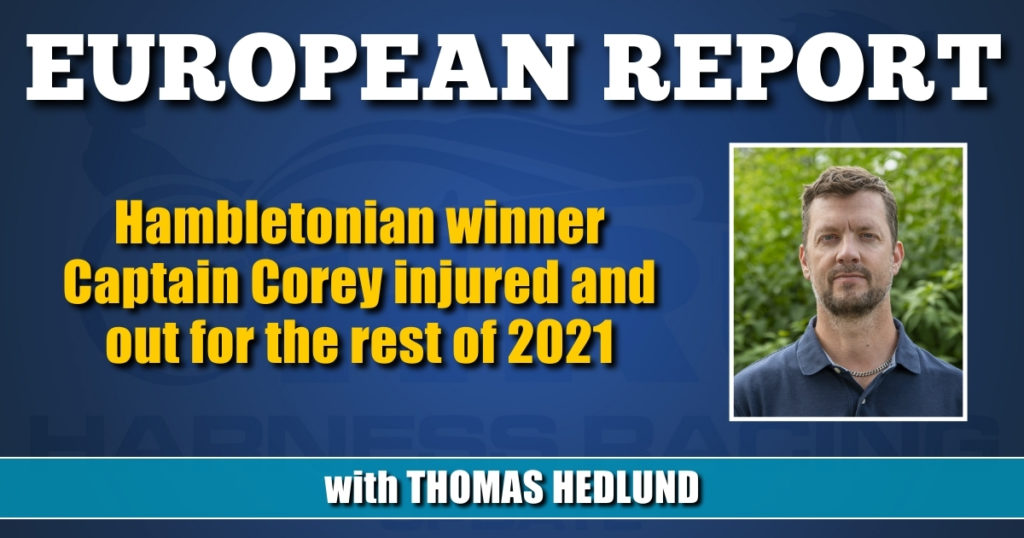 Trainer Åke Svanstedt told Swedish media on Monday (Sep. 20) that his 3-year-old Hambletonian champion Captain Corey has a fracture in a hoof that has put a stop to his racing schedule for the remainder of 2021.

“It’s not a serious fracture, but there will be no more starts this season. It will maybe take 4-5 months before Captain Corey can train again,” Svanstedt said.

The owners will decide if Captain Corey will continue to race or if he will begin his work as a stud.

The $235,000 Prix de l’Etoile over 1.3 miles was held at Vincennes on Sunday (Sep. 19) afternoon and champion trainer Jean-Michel Bazire had his Ganay de Banville (Jasmin de Flore) in splendid condition.

Five-year-old Ganay de Banville started 50 meters behind well-merited 3-year-old trotters and the task was nothing but easy for Bazire’s horse. After a quick attack three wide at the back stretch, Ganay de Banville hit the front with a half mile to go.

First choice 3-year-old Italiano Vero, got his chance from position third on the inside, but new leader Ganay de Banville was strong over the stretch and won easily in a splendid mile rate of 1:52.2.

Gladys des Plaines came to the lead after a kilometer and just cruised away from her opponents during the race’s last part.

Nurmos in front seat ahead of Oaks and Kriteriet in Sweden

Nurmos trains four horses in the 12-trotter strong field in $640,000 Oaks for 3-year-old fillies and all his weapons won their eliminations, respectively. Two of his horses (Senorita Tokio and Isabelle Cash) are both undefeated after four starts so far this year and Oaks is a true highlight on Saturday’s card even if the purse is higher in the $920,000 Svenskt Travkriterium, where colts and geldings gather over 1.6 miles.

Nurmos has a shot even in that race. His Mister Invictus (Ready Cash) has five wins in six attempts ahead of Kriteriet and will be a serious factor in a very open story on Saturday.

11 – Mustang Racer – The Bank – Per Lennartsson