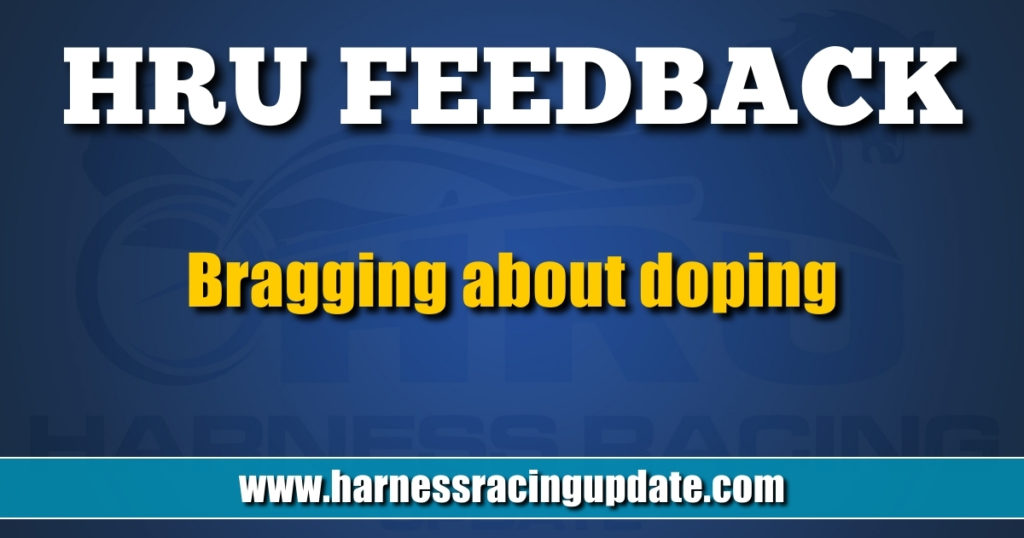 I read the Bill Finley’s article about so-called revelations based on conversations where the likes of Surick, Navarro, Marino and Oakes were BRAGGING about the success of their illicit activities affecting the outcome of races (full story here).

I sure hope the government’s, “AMPLE EVIDENCE of Surick and Navarro’s efforts to obtain, share, distribute, discuss, use and conceal various performance-enhancing drugs that they each intended to be, and believed to be, untestable by racing authorities” is beyond these conversations or the government case is sure to be shredded by defense attorneys. Bragging about things you never did (legal or illegal) is business as usual on the backstretch,

Some years ago, I was having breakfast in the track kitchen at Monticello with a driver (who shall remain nameless) who bragged that he never lost a race that he tried to win. Never. I almost spit up my entire breakfast. His win percentage was infinitesimal, and I watched enough of his drives to, er, disagree. I believe there were a number of “bad” races back then, but there were a lot more stories about bad races that were guys just bragging.

Here we go again in three weeks. Some of the best bred, best conformation and the wealthiest connections all converge in Lexington, KY in October seeking future riches and to campaign the next great stallion or filly. If you want to win in New York with trotters and on the Grand Circuit, you have to have a Chapter Seven whose offspring finished 1, 2, 3 in both 2-year-old NYSS finals and won the 3-year-old races too. If you wish to win in Ohio with pacers, you have to race a Downbytheseaside who was undefeated once Brian Brown made that minor equipment change and put Chris Page in the sulky. Well respected owner Joe Sbrocco wasn’t fearing any dragon’s in “Seaside’s” final race, and I would wager he’s not fearing any of his offspring’s either. Downbytheseaside didn’t win a Jug, but he was incredibly tough to beat on a half-mile oval. His progeny will win in Delaware in the future, hopefully with Brian Brown’s Gulf Shores.

Many owners will also want a Walner whose untimely injury cost all-around good guy Ken Jacobs a Hambletonian victory. Old habits are impossible to break, and Muscle Hills will continue to sell well… Muscle Hills look great, present well and are a great cross for Chapter Sevens and Walners for fillies. The Big Valley is selling night 1 at Lexington but he’s also the little and full brother of Maverick and Greenshoe. Will he be Maverick or Greenshoe? Owners will pay up to find out.

In a year where the rich only got richer, money is cheap and inflation is rampant, you can feel the inflation in yearling prices about to pop. While we probably won’t have two million plus yearlings this year due to Damien and Maverick, those with thick wallets weighing them down won’t let a few shekels stop them from purchasing a horse who could possibly be syndicated for millions. I’m hoping Richard Gutnick gets himself another Hambletonian trophy, Ken Jacobs finally gets to race in a Hambletonian and Brian Brown finally wins that Jug trophy, preferably with all of Downbytheseaside’s original owners. Sooner or later, good guys win big races and I never tire of seeing Joe Sbrocco win stakes races. If you ever try to pick up the dinner check around Joe, forget it. He may not be as young as he used to be, but he’s pretty spry.

Good luck to all who play and bring your checkbooks. As Uncle Junior said in The Sopranos, “You come heavy or not at all.”