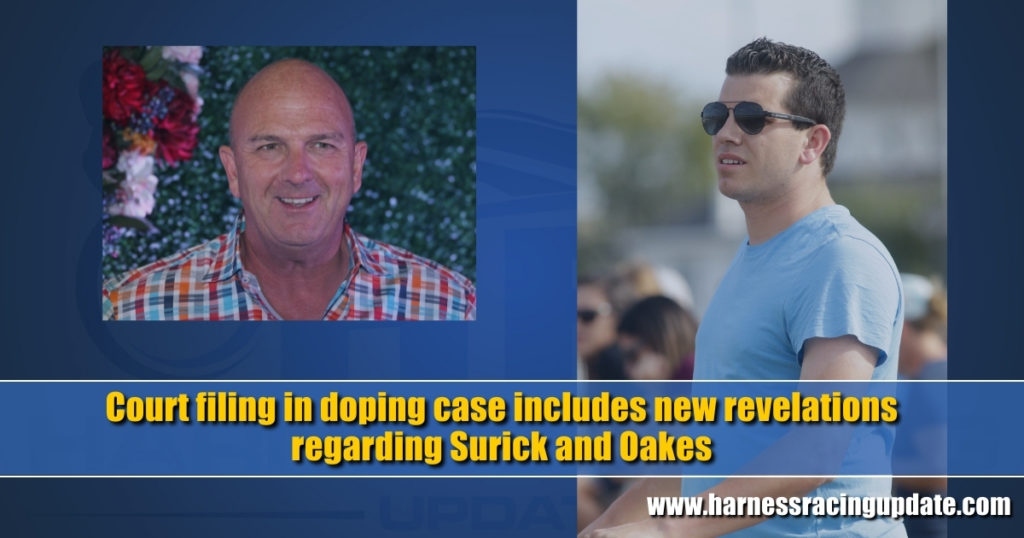 In a recent court filing, the government has portrayed banned harness trainer Nick Surick as a central figure in the early days of its investigation that led to a stunning run of indictments that charged several individuals with using performance-enhancing drugs on racehorses. In particular, Surick is, allegedly, closely linked to high-profile thoroughbred trainer Jorge Navarro, who, it has been revealed, came on the FBI’s radar because it was looking first into the now banned harness trainer.

Navarro has pled guilty to one count of misbranding and drug alteration conspiracy and is awaiting sentencing.

Surick was originally charged with drug adulteration and misbranding conspiracy and obstruction, but his name was not included in a superseding indictment filed in November, 2020. It is not known whether or not he has cut a deal with prosecutors.

The filing also goes into new detail about the alleged role of harness trainer Chris Oakes, who was also said to have worked closely with Navarro in his efforts to dope his horses.

The revelations about Surick and Oakes were part of a motion filed by United States Attorneys after lawyers representing thoroughbred trainer Jason Servis and others filed a motion of their own to have evidence acquired through wiretaps dismissed. The government’s response included additional information relating to the many people who are either under indictment or have pled guilty for their alleged role in a network that sold, promoted and used performance-enhancing drugs on both standardbreds and thoroughbreds.

The filing shed light on the beginnings of the investigation, which included an initial look at Surick’s operation. The FBI first became aware of Navarro after intercepting phone calls made by Surick in January of 2019.

“The immediate backdrop for the investigation of Jorge Navarro, and in particular the interception of his communications beginning in January 2019, was the Government’s months’ long investigation of Navarro’s co-conspirator Nick Surick and others in the horse racing industry,” government lawyers wrote.

The filing continues: “…the Government’s investigation had revealed ample evidence of Surick and Navarro’s efforts to obtain, share, distribute, discuss, use, and conceal various performance enhancing drugs that they each intended to be, and believed to be, untestable by racing authorities.”

The taps on Surick’s phone also revealed a conversation with harness trainer Chris Marino in which the government alleges the two discussed the administration of baking soda to a horse. The filing contends that the substance reduces muscle fatigue and also has the effect of masking other prohibited substances.

With the evidence gathered through the taps of Surick’s phone, the government obtained a permit allowing it to tap into Navarro’s phone. The investigation into Navarro led authorities to a number of other individuals, including Oakes and veterinarian Seth Fishman.

The evidence includes an intercepted conversation between Navarro and Oakes in which they discussed a concoction prepared by Oakes that contained “branch chain amino acids” and could not be detected by drug tests.

“This drench I got, dude, they can test you all day, night, before, after… zero chance you get caught,” Oakes allegedly said.

During the same intercepted phone call between Oakes and Navarro, Navarro calls Fishman “this crazy (expletive)” and bragged about the potency of a drug Fishman had provided him with. “He sent me something with amino acid right last year,” Navarro said. “And I (expletive) gave it to this horse. This (expletive) galloped. Galloped.”

Navarro then asked Oakes for help in obtaining that drug, or another that Navarro could use.

Rick Dane Jr., a harness trainer also among those indicted in March, is also mentioned in the filing. The government alleges that Dane, through Fishman associate Lisa Giannelli, acquired what was being referred to as the “Fishman Paint Shot,” which is described as a powerful painkiller intended to be more powerful than morphine. It went on to allege that Dane was “tasked with delivering both legal and illicit veterinary substances to horse farms.”

Along with Servis, Navarro is the biggest name to be embroiled in the scandal. A native of Panama, he began his career in 2008 and his stable soon established itself as a powerful force in New Jersey and Florida. In 2019, he won his seventh straight trainer title at Monmouth Park and his top horses include X Y Jet, a top sprinter who earned more than $3 million in purses. In January of 2020, Navarro reported that X Y Jet had died of a heart attack.