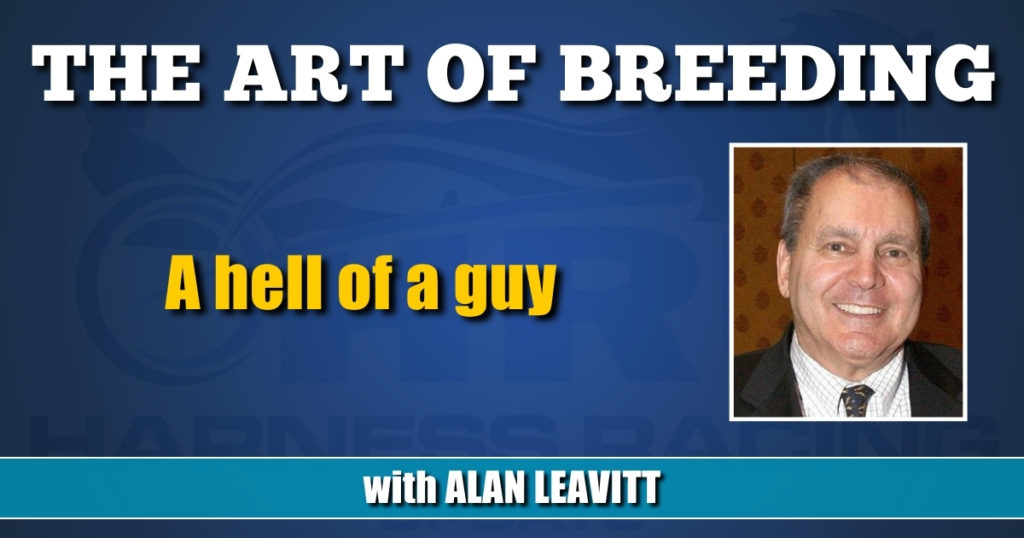 A hell of a guy

In my compulsive reading of five generation pedigrees, I’m starting to feel analogous to a Pennsylvania Dutch story I heard long ago.

It seems that a lady from New York had driven down to Lancaster County, PA to learn more about the Amish. She stopped at the first farm house she came to, and introduced herself to the lady of the house, who was obviously Amish.

“Can I meet your kids?” the New York visitor asked.

“Of course,” the Amish lady replied, motioning through the open door to whoever was within. Out came a pair of identical twin teenage girls.

“This is Sarah and Sally,” the mother proudly said.

Then, another hand motion, and out came two 10-year-old boys, also identical twins.

“This is John and James,” the mother said, again with pride in her voice.

At this point, the lady from New York couldn’t help blurting out, “Oh my gosh. Twins every time?”

“Oh, no,” The Amish lady replied, “Hundreds and hundreds of times, nothing at all.”

That said, however, I did hit pay dirt of a different sort when I ran the pedigree of Ava Marion, one of many good mares owned by Jeff Gural. And here, a quick digression related to Gural.

As far as this kid is concerned, Gural literally saved all of us in U.S. harness racing when he saved The Meadowlands. Then, as icing on the cake, he also resurrected Vernon Downs and created Tioga Downs. Jeff is now, finally, in The Living Hall of Fame. No one deserves to be there more.

Now, back to Ava Marion, and the next-to-last name in her tail-mare, or bottom line. Ava Marion’s fourth dam is Some Pride, by Duke Rodney, and therein lies a tale.

Some Pride was a good race mare who won just under $200,000. But she outdid herself as a producer, coming up with the champion 2-year-old trotting colt of his year, Self Confident. For the record, Some Pride was bred by someone I knew well in Olden Times, Jerry Some. Jerry used his last name as a prefix for every horse he bred, although he himself pronounced his last name with a long “o”- sō-me. A trivial point, but everyone in our biz deserves to be remembered.

Duke Rodney was a great stakes colt, and then a top free-for-aller, earning more than $600,000. But what holds my interest here is the story that goes with his sire, Rodney, and the farm where he stood, Walnut Hall Stud.

At some distant point in time, the early ‘40s, Walnut Hall Farm was owned by Harky Edwards and his sister, Katherine. Harky died at an early age, and his half interest in the farm passed to his widow, Polly. Polly remarried, to a man named Sherman Jenney, and after splitting off their share of the original farm, they embarked as horse breeders.

They knew next to nothing when they started, but they were smart enough to know what they didn’t know. So the obvious solution was to hire a top farm manager, and Francis McKinzie fit the bill perfectly.

At the time, McKinzie was managing Castleton Farm, then the second biggest and best standardbred farm in the world. But money talks, and they offered enough of it, McKinzie walked, straight to Walnut Hall Stud, as the Jenneys had named their new operation.

McKinzie was a Compleat Horseman, to plagiarize Izaak Walton’s foundational tome on fishing, The Compleat Angler. In those days, a farm manager was expected to do a number of things that today are strictly the province of equine veterinarians. That list includes suturing a mare’s vulva, today a process dignified by the term Caslicking. But in those days, all the Francis McKinzies of the world needed was a good, sharp needle, some strong thread, and a tolerance for blood.

McKinzie was not only a top horseman, he was also quick witted, which served him in good stead at lunch in a popular sandwich shop shortly after going to work for the Jenneys. It didn’t take long for McKinzie to take the measure of Sherman Jenney, which led to the following exchange:

“What’s Sherman Jenney like?” someone called out to McKinzie across the crowded little dining room.

“He’s a hell of a guy,” McKinzie shouted back, “But he just ain’t much in demand.”

While the Jenneys had wound up with some nice mares, the jewel of their breeding operation was their trotting stallion, Rodney. Rodney had been an outstanding racehorse, finishing second to Hoot Mon in the Hambletonian, and winning several other of the important races of his day.

He was owned by David Johnston, both a breeder himself, and an amateur driver of some note. Having no farm of his own, he had leased Rodney to the Jenneys, who had committed themselves to breeding only trotters.

In the split-up of the farm property, Walnut Hall Stud wound up as the owner of the Long Barn, at the time the longest known horse barn in the United States.

Now it’s an important fixture of the Kentucky Horse Park, but then, with a tanbark surface, it was a great place to lead yearlings to pony. And no one was better at that than Francis McKinzie. This kid can remember attending a yearling showing in that barn the night before the Walnut Hall Stud yearlings were sold there.

I’d never seen horses trot that fast, and the lead ponies would have to turn sideways when they hit the wall at either end. In those days, the two gaits of our breed were not that well established yet, and McKinzie didn’t hesitate to put toe weights on any yearling who even thought about pacing. Today, if you asked a blacksmith if he had toe weights, all you’d get is a blank stare.

Rodney was a truly great sire. But just as the Hambletonian was the one mountain he couldn’t climb all the way to the top himself, neither could any of his progeny; which didn’t stop a filly from his first crop, Princess Rodney, from finishing a close second in the big dance.

With unlimited access to Rodney, the Jenneys produced a sizable number of trotting stakes winners, some at the highest level, the only exception being our biggest race. And with McKinzie handling the marketing the bucks came rolling in.

There were only two egregious exceptions to that rule, and they both involved yearling colts in two different crops. No matter what tricks McKinzie worked, he could never get Duke Rodney or Speedy Rodney to show any trot at all. Even with everything but the kitchen sink on their front shoes, all they did was shuffle along on a slow pace.

Which was why each of them only brought $7,000, about a third of the usual Walnut Hall Stud average. But somehow it didn’t stop the two of them from becoming world champions and the two greatest money winners Rodney ever sired.

Like they say when there’s nothing else to say, “Go figure.”