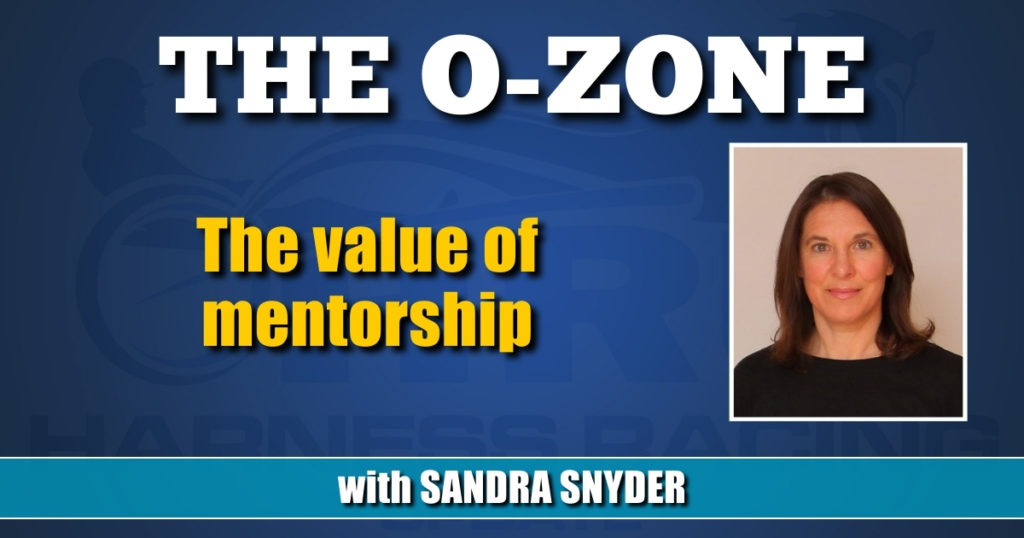 The value of mentorship

“I think that’s great and I love it. We were side-by-side in the paddock there a couple weeks ago and I thought that was great,” said Moore with a chuckle. “The older people like me aren’t going to keep this sport going, it’s going to be the younger people. And if older people can do their part in training them to do things what I consider proper anyways, then that’s all good.”

Having spent 13 years teaching at the Atlantic Veterinary College, Moore was long used to mentoring young people, so it was natural for him to transfer that mindset to his harness racing operation. The current resident of Cambridge, ON said he operates on the assumption that caretakers and assistant trainers would like to advance their careers in the industry and encourages them to achieve their goals.

“I don’t know if he’s just got teaching in his blood or what, but every day you just ask questions and he will not just give you the answer, but give you a complete explanation and a background,” said Symes. “I remember, this is going back years ago, but he had one with a tooth issue or something and I just asked one question and he put the lamp on my head and he said, ‘Well here, now you look…’ Usually grooms are just standing there holding the twitch, but he throws you right into it, he wants you to learn.”

PEI native Dale Spence is currently benefitting from Moore’s mentorship and the trainer expects the young horseman and his fiancée Mackenzie MacInnis will be the next members of Team Moore to strike out on their own. The veteran trainer has also supported his son Tyler Moore through the development of his driving career, gradually gaining experience and achieving some success on the Ontario Sires Stakes (OSS) circuit and at Woodbine Mohawk Park.

Trainer Dustin Jones is in the same boat as Moore, helping both his son Tyler Jones and PEI native Ryan DesRoche launch their driving careers. The Waterdown resident said time, hard work and the repetition of sitting behind a wide variety of horses are essential investments for those hoping to enjoy long term success in the industry.

“They’re working hard at it. Putting a lot of miles in, and showing up to the barn every morning, like 5:30 in the morning, and working, and then hustling for drives at night, so they’re putting the effort in,” said Jones, who said he mentors mainly by example, including that early arrival at the barn. “They have to put the time in if they want to get good. They’ve got to show up, and work, and learn. They don’t want to put the time in, they’re not going to get ahead.”

When he decided to swap his career in youth-protection services for one in harness racing this spring, Tyler Jones reached out to his father’s long-time friend Murray Brethour and the decision to make the trip to Kawartha Downs each Saturday to drive a few of Brethour’s horses has given him an opportunity to learn from a wide-range of industry veterans.

“Every now and then (Brethour will) say some kind of a tip or little advice to move forward, and you definitely want to be a sponge,” said Tyler Jones, who has also benefitted from watching drivers like Hall of Famer Doug Brown. “Just watching how they are composed and how they go about a race and sort of the little things they do in a race, and you just can tell he has had a lot of success, you can just tell. Guys like that are very professional and very good at what they do.”

The younger Jones said his father is both his toughest and most helpful critic, but that other trainers and drivers, including those having success at the province’s top level, have also been generous with their insight.

“I try to ask people that I admire questions after certain races, like ‘I notice that you did this,’ or just, ‘Can you walk me through the process?’ or ‘What were you thinking at this time during the race?’, whether it be Sylvain Filion or James MacDonald,” said Tyler Jones. “Just little tips, but mostly everything comes down from my dad.”

Both members of the Jones family and trainer Blake MacIntosh said the ups and down of the business can make it a hard sell for young people looking to make it their career. MacIntosh expects that his current assistant trainers Jessica Fallon, in New York, and Jeff Courchesne, in Ontario, will soon be headed out on their own, Courchesne in partnership with girlfriend Gabriella Sasso. MacIntosh predicts that more of his female employees will make that leap in the future.

“It’s a tough business. The ups and downs in this business are crazy. You can have a great year, have Courtly Choice one year, and the next year have nothing and you’re back battling. You’ve got to love it, and I seem to find that the women love it more than the guys,” said MacIntosh, who supports the career aspirations of his staff in concrete ways, by giving them space for their own horses in his barns and adding those horses to his training sets. “They love the horses and I think that’s why we’ll see more and more women trainers coming out. I think in the future you’re going to see almost 50-50 women to guys, because if you look at it, it’s the way it’s going.”

Symes agrees with MacIntosh’s prediction, noting that on race nights at Woodbine Mohawk Park the majority of the people working in the paddock are women and pointing to young women like Sasso and Amanda Fine who are succeeding as trainers on the Ontario circuit.

“You look through the paddock and it’s all mostly female grooms and I hope they’ll go to the next step and jump out on their own because the people that are hands on are going to be your best trainers, because not only do they have the need for speed, but they have the care,” said Symes, who is currently sharing her knowledge with a young woman who arrived in her barn with no harness racing experience.

“It takes a lot of patience, because you’ve got to slow down your operation to teach them the steps. You can’t just say, ‘Okay, get that one, that one and that one ready’. You have to take a step back and show them exactly what to do, but at the end of the day it’s very rewarding to see how quick she’s catching on and how much she’s loving jumping on one and going to jog five or six miles.”

By sharing her love of the horse and the harness racing knowledge she gained from Moore, Symes is ensuring that the life changing gift of mentorship is passed on to the next generation.