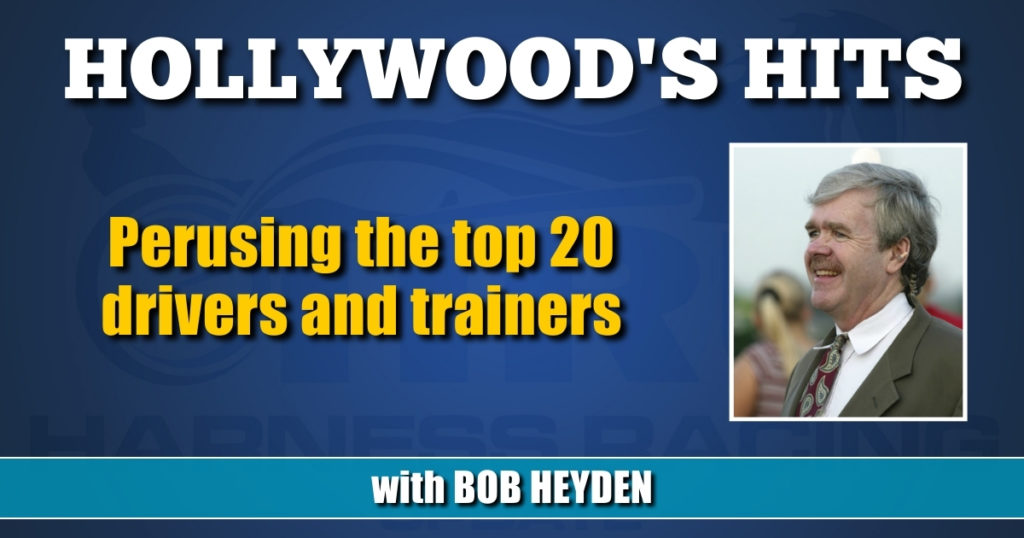 Perusing the top 20 drivers and trainers

Nifty Norman is making a strong play for Trainer Of The Year honors with a #6 ranking and a .343 UTRS. His record is 449 99-64-58 through mid-September. He just took the Peaceful Way on the heels of a Hambletonian Oaks win — both with undefeated ladies.

Todd McCarthy is on the verge of doing what Dexter Dunn did last — vault from not being in the top 50 to cracking the top 10 next year.

The same top 4 drivers from 2020 are there again in 2021 — Yannick Gingras and David Miller rounding out the quartet.

James MacDonald has now cracked the top 20. His huge night of four wins and two seconds-good for $282,238 on North America Cup night did the trick. Especially noteworthy was his second placed finish with Ritson from Post 10 at 97-1 in the $240,000 Goodtimes final.

But, he was not the winningest brother MacDonald on the card. That honor went to older brother Mark. His lone drive resulted in $320,000 in purse winnings with his fine steer behind Wellwood winner King Of The North. How many times have you seen brothers each making over $250,000 in purse money on the same night? Five of the 13 races went to a son of Fred MacDonald.

The top six favorites in the NA Cup finished in the top six spots.

Walner winning both the Wellwood and the Peaceful Way in his first crop with King Of The North and Venerable evoked memories of the very first offerings of Baltic Speed and Andover Hall.

In 1988, Valley Victory and Peace Corps both won their divisions and the Breeders Crown as freshmen — both offspring of 1984 Breeders Crown winner as a freshman Baltic Speed.

In 2007, Donato Hanover and Danae won the Hambletonian and the Oaks as son and daughter of 2001 freshman colt of the year Andover Hall.

Desperate Man had the lowest winning percentage for 2021 going into the NA Cup — 12.5 per cent.

Yearling prices for the check-getters in the NA Cup:

Chapter Seven swept the board in all four trots:

Who would have thought that the longest-priced winner of the night would be a Chapter Seven and for Ron Burke and Gingras, no less?

Art Major, at age 22, showed he still has plenty on his fastball as Test Of Faith dominated in the 3YOFP category.

So Surreal and JD took the 2YOCP at 15-1 as Ray Schnittker trained the winner (his own Huntsville sired the show horse).

Veteran American Ideal is still quite a force siring the 2YOFP winner Gothegreenlight.

Think that Chapter Seven’s night was historic? Yes, but Credit Winner sired the winners of the first six NYSS finals his progeny were in from 2004-05.

At Harrah’s Hoosier Park on Sept. 9, 10 and 11, James Yoder, 27 — one of three sons of Breeders Crown-winning driver/trainer Verlin Yoder — had a tremendous weekend on three consecutive nights.

Sept. 9 — Lorraine Smoke was a $173.80 winner in a $68,000 feature Indiana Sires Stakes event for 2-year-old pacing fillies. It was the highest-priced winner of the card. James also won with a favorite earlier on the card: $6.80 Wonder Of Love in the third race.

Sept. 10 — Fulfullmydestiny 1:49.2 $2.80 was the lowest-priced winner on the card (and the lowest priced horse of any starter, too) This colt became the first ever sub-1:50 2-year-old in Hoosier Park’s 27-year history by 3/5ths of a second, lowering his own mark from the previous start.

By definition, the driver of a huge favorite almost never could even drive the longest shot and vice-versa. Of course, any driver who sits behind a 85-1 shot is unlikely to even sit behind a 2-5 shot, never mind win with both.