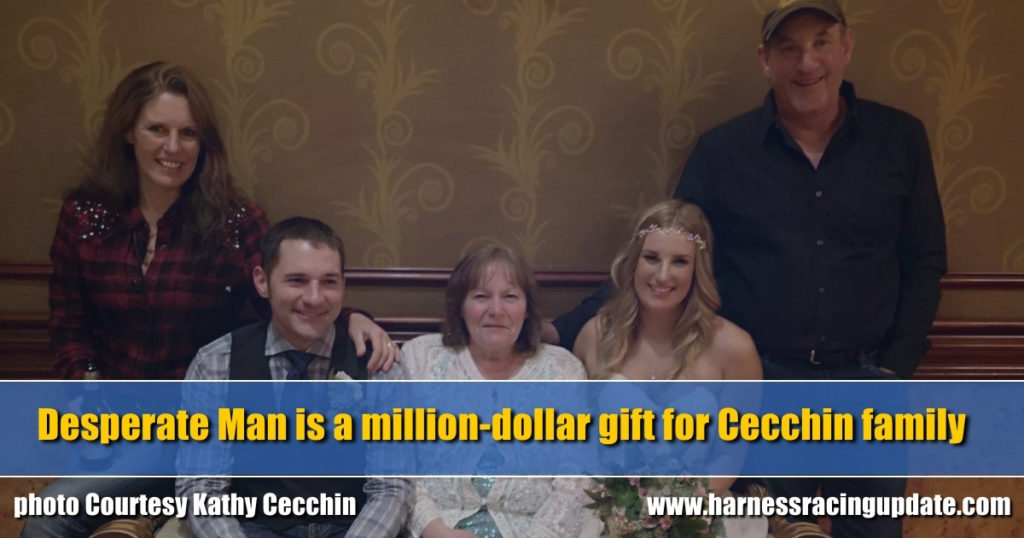 Pepsi North America Cup finalist and $20,000 yearling purchase Desperate Man has proven to be an exceptional wedding gift for Paul and Nikki Davies and a surreal present for the entire Cecchin family.

The handsome bay known as Desperate Man has been a little bit of everything over his short life, from a wobbly-legged weanling, to a wedding gift, to a wily competitor set to take on the world.

When the pacing son of Shadow Play steps onto to the racetrack and into the spotlight on Saturday night (Sept. 11) at Woodbine Mohawk Park, everyone connected to the horse with the modest price tag and big heart will no doubt take a brief moment to wrap their minds around what has been a most unexpected journey.

And then, the reality of the moment will sink in: their horse, the one who cost $20,000, will square off against the best 3-year-old pacers on the continent in the $1 million Pepsi North America Cup.

“It’s been quite the journey, one that I don’t think any of us ever expected we’d be on,” said Kathy Cecchin. “It’s kind of surreal, but we couldn’t be any happier. It’s just so hard to believe. It’s really difficult to put into words. He really has been a gift.”

But not just for the horsewoman who holds the reins as the trainer of Desperate Man, known around the barn as “Slick.”

Cecchin co-owns the horse with her husband John, daughter Nikki and son-in-law, Paul Davies, a horse racing family affair in every sense.

When Paul and Nikki were married on Dec. 8, 2018, there was a particular present, one that wouldn’t be found on any bridal registry, that would become just as memorable as they day itself.

As Paul recollected, his parents-in-law offered to help out with the down payment on a new house, or to have part ownership on an unraced colt.

For the newlyweds, one gift represented a sure thing, while the other was quite the opposite.

The couple, horsepeople themselves, talked it over and quickly discovered they were on the same page with their decision.

“We chose to accept the very generous offer of half ownership in the horse,” Paul said. “Nikki and I have been fortunate to co-own (along with Deborah Pinel) Outlawgrabbingears, who has been amazing for us. So, he paid for the down payment of the house.”

A 5-year-old son of Smart Shark, Outlawgrabbingears has won 27 starts and banked over $330,000 in an outstanding career that is still very much on the fast track.

“His barn name is ‘Trucker,’ and Nikki and Paul’s son’s name is Deacon John Trucker Davies,” said Kathy. “You can see how special that horse is to them and to us too. They sent the horse to me after his three-year-old year. I was honored they would trust us with him.”

The pacer also played a role, a big one, in the story of Desperate Man.

“I never saw him,” said Kathy, of Desperate Man. “I picked him only based on his family. His mother and the mother of Outlawgrabbinggears are sisters. There was a Mach Three filly selling at Forest City and I thought she was going to be out of our price range, and then we found Desperate Man selling in Lexington.

“Trevor Henry, John McLeod, and Jimmy Fleming were there. Trevor looked at him for us and said he was correct. He had chips out of his left hock, which they disclosed, but everything about him looked good. Jimmy Fleming actually bought him for us, which is a big ask. We’re forever grateful. So, Jimmy did, and that’s how we got him.”

It was love at first sight for Kathy, who has trained a small stable of horses since 1996.

Although he certainly looked the part of a good horse, there were no illusions of grandeur at that point in time.

“There are no expectations when you buy a yearling,” said Kathy. “When the money is spent, the money is gone. We gelded him because one day we thought he could be a riding horse. We never expected it to turn out the way it has.”

With Henry in the race bike for the 2-year-old qualifier race, Desperate Man lined up behind the gate for the first time.

Less than two minutes after the field was sent on its way, Henry and the rookie pacer crossed the wire nearly a length ahead of their closest pursuer.

“I don’t think I had any idea of how good he could be until that first baby race,” said Kathy. “When he came home in :26-flat, everyone was speechless. He is a May 31st foal, so the whole time coming up to racing, we thought the first sign he shows us stress, we’re going to stop. I thought if he could be a nice Grassroots horse that would be great. But that baby race, I thought, ‘Okay, he might be an overachiever. He’s a pretty average Joe.’”

She was happy to be proven wrong.

Fast-forward to the present and Desperate Man has amassed $353,014 in winnings and gone hoof-to-hoof against his fleet-footed contemporaries.

Desperate Man’s two-year-old campaign yielded three wins in his six starts. All of those wins came in the Ontario Sires Stakes (OSS) Gold division, including a mark of 1:51.2 at Mohawk.

He notched his first victory of 2021 on July 25 at Georgian Downs in the OSS Gold series, winning in a lifetime best 1:49.4, and in the process, bested sophomore heavyweights Bulldog Hanover and Meadowlands Pace winner Lawless Shadow.

Now, fresh off a second-place finish to Bulldog Hanover in one of two North America Cup eliminations on Sept. 4, Desperate Man, who crossed the line in 1:49.1, cutting the final quarter in :25.4, will look to go one better on the big stage.

“He’s a good horse and we’re very proud of him,” said John, a lifelong horseman and trainer who worked with Hall of Fame trainer Jimmy Takter in the 1990s, as well as the late Mark Austin, who played a major role in the success story of standout pacer Fool Me Once and many others. “He’s just so well mannered. He never gets shook up. He’s one of the few horses in that caliber of horse that doesn’t wear earplugs or get riled up. I’ll put it this way… he’s smarter than we are. I can definitely tell you that.”

All four of his owners are dealing with the stress of being in a prestigious race in decidedly different ways.

Admittedly, they will be on the same page come Saturday night.

“I’m nervous, for sure,” said Kathy. “There are lot of people that aren’t in this race, so we are extremely grateful to be in this position. But I’m definitely getting more nervous as the race gets closer.”

“The nerves aren’t there yet,” said Nikki. “We have a few of our own to race in the meantime, so it’s on a delay for now. But I’m sure they’ll come. I’ll let mom do all the worrying for now.”

Paul, who also drives and trains, is operating on an even-keel approach.

But, if last week’s elimination is any indication of how he’ll react this weekend, containing his excitement and decibel level won’t be an easy task.

“I think Saturday the nerves will kick in. When they were coming down the stretch last week in the elims, I might have been a little loud. I’ll try to keep my composure on Saturday night, but I wouldn’t bet on it.”

And speaking of betting, there could be a wager of sorts by some of Desperate Man’s owners in the minutes leading up to the race.

But it won’t be placed on the horse that will line up behind the gate in post-position six.

“They always tease me because I never watch him race,” said Kathy. “They bet as to where I’ll hide. I’m a replay watcher. John is the watcher.”

Nikki is somewhere in between her husband and her mother.

“I said that maybe we’ll be lucky if she decides to watch a race for a change. She wants me to come in the paddock and help her out a little bit on Saturday, so maybe I’ll have to try and convince her to come out and watch the race. I am the same with Outlawgrabbingears. I never watch the beginning when they come off the gate, but once they’re clear, then it’s alright.”

Whether they watch part of the race or all of it, each co-owner will have a sense of pride of having a horse in a race that’s crowned some of the sport’s biggest names.

Win, top-three, or finishing off the board, Desperate Man will be held in the same high regard by those closest to him.

“His future is pretty well mapped out no matter what happens,” said John. “Hopefully, we can have a nice horse for three or four more years and after that, we’ll buy him a saddle and he can enjoy a great life that he deserves.”

“I’m always proud of this horse,” added Kathy. “He always gives what he’s got to give. He’s not like some of the other horses. He needs things to go his way with the trip. He doesn’t leave aggressively, but he always shows up in the end. That’s all we can ask of him.”

It’s a sentiment shared by her daughter and son-in-law.

“We’re just proud of him and of all the work mom and dad have done,” said Nikki. “It’s so crazy how it all happened. Outlaw has been a horse of a lifetime for us, and to think mom selected Desperate Man because of Outlaw… it’s just hard to believe how things work out sometimes.”

“You can’t go in there expecting to win, but you hope that you do,” offered Paul. “If the trip does work out, I think he does have a good shot. But no matter what, we know how lucky we are to have a horse like this.”

A gift, they all say, wide smiles included, that keeps on giving.