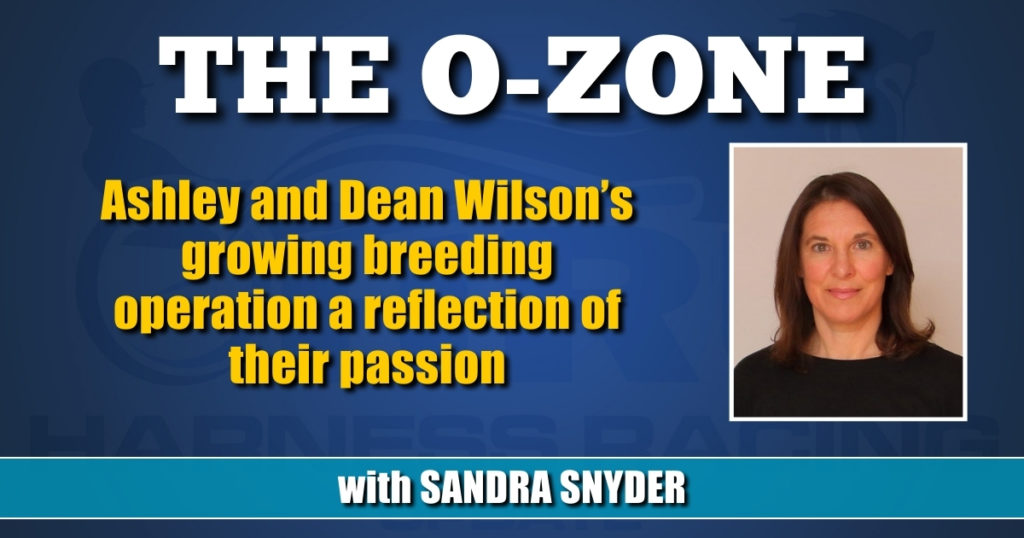 The couple will have 29 yearlings to sell this fall — 23 in the London Virtual Yearling Sale and six in the Ontario Select Yearling Sale.

‘Pride’ and ‘passion’ often get lumped together as catchphrases and slogans, but in spite of their overuse there might not be two better words to describe Ashley and Dean Wilson and their Kerwood, ON breeding farm.

Dean has owned and bred horses in partnership with his uncles Melvin and Keith and father Raymond Wilson since the mid-1980s, nurturing a love of standardbreds alongside his primary occupation as a cash crop and beef cattle farmer. In 2011, he opened the doors of his barn to a few outside horses and one of his new boarders was Ashley, who grew up in the show jumping and dressage worlds, but wound up just down the road at Westwind Farm after graduating from Kemptville College’s Equine Studies program.

After dating for two years, the couple wed in 2014 and gradually started to expand their breeding operation. Five years ago, Ashley gave up a job with an accounting firm to focus on the horses and Dean has handed more responsibility for the cash crop and beef cattle operation to two of his adult sons, Brandon and Curtis.

On a property that has been in the Wilson family for more than 140 years, the operation currently consists of 43 mares, some 29 soon-to-be weanlings, 29 soon-to-be-sold yearlings and five yearlings getting ready to go directly to trainers. Fifteen of the mares belong to the couple, while the other 28 are owned by people from across North America whose broodmares are enrolled in the Ontario Resident Mare Program.

“That’s over max,” said Dean with a chuckle. “We only had around 20 to 30 (broodmares) and then last year everybody seemed to think they needed one, so we got a whole bunch of maidens in and we ended up jumping to 43.”

Until this year, the couple have been the operation’s sole employees, relying on assistance from Brandon, Curtis, and Dean’s other sons, Drew and Trevor, as needed, along with website expertise from Dean’s brother Owen and nephew Josh. This summer, they hired two young women to help with yearling preparation and are hoping one will stay on part-time for the remainder of the year.

Of the 29 yearlings they are preparing for sale, six are headed to the Sept. 26 Ontario Select Sale in the Princeton Farms consignment. Raised by Dr. Steve Taylor of Kitchener, ON, the Wilsons put the final polish on the youngsters and will show them off to interested buyers in the coming weeks. The other 23 yearlings will be sold through the London Virtual Yearling Sale, 16 having been born and raised on the Kerwood farm, while the other seven arrived for yearling season. The Wilsons are the second largest consignor behind Seelster Farms in the virtual sale, which begins Oct.16.

“We raised more and we had a few more ship in from last year,” said Ashley. “It’s nice that people send them, but I think that we’re big enough that we won’t have the manpower and the time next year probably.”

“We’ll probably just stick with our own in the future,” Dean added, noting that 39 of the 43 mares on the property are in foal at present. “This year we took on some extras, but probably in the future, with that many mares, we won’t take any outsiders.”

The Wilsons were satisfied with their results in both sales last fall. All About Addie, an Archangel half-sister to 2020 2-year-old Ontario Sires Stakes Grassroots champion Four Wheelin, was their top seller in the London Virtual Sale at $39,955 for breeder Christina Tieszer of London, ON. Archangel–Lady Bling daughter A Precious Stone topped their Ontario Select Sale offerings at $42,000 for breeders Blair and Erna Corbeil of Beaumont, AB.

“It was a lot of work at the farm. Every day it felt like people were here to look at them, because they didn’t want to buy them without seeing them,” said Ashley. “We didn’t have that big hustle at the end; it was just a lot of steady work throughout the season. We can’t complain; they sold well.”

While the near-daily stream of visitors has yet to start this year, the couple expects things will pick up in the coming weeks as videos are posted and their advertisements start to run. Among the youngsters in this year’s consignment are a Lookslikeachpndale half-brother to All About Addie and a Muscle Mass half-brother to A Precious Stone, along with a Wheelin N Dealin half-sister to 3-year-old trotting colt Ontario Sires Stakes Gold Series leader Logan Park and a Resolve half-sister to Dream Of Glory champion Publicity Seeker, who currently sits fourth in the sophomore trotting colt Gold Series ranks. Both Logan Park and Publicity Seeker will compete in the $240,000 Goodtimes Final at Woodbine Mohawk Park on Saturday, Sept. 11.

The couple still race the odd horse, and the Sept. 1 claim of 5-year-old trotting mare Victoriahasasecret was a tender topic two days later. The couple bred the daughter of Holiday Road and Diamond Victoria and she had earned $79,335 under the tutelage of trainer Brittany Kennedy before the claim.

“When Victoria was going in London we’d go out to watch her, and then when COVID hit Brittany would let me go with her and be the groom,” said Ashley of the mare, who was the Three-year-old Trotting Filly of the Year at The Raceway at Western Fair District in 2019. “It’s a lot more fun going. We like to go, and we have two little kids (Caitlin and Ryan) so we’ll bring them with us.”

“But the computer is a great thing, you can watch it all live too, so that’s a huge help,” Dean added. “We try to watch all ours that we’ve sold over the past years, watch them race every night. We keep an eye on the entries every week.”

The most successful horse the couple has bred and raised from one of their own mares is Archangel–Dream Taker son Knight Angel, who was a Gold Series winner at both two and three and has earned $283,205 in his four-year racing career. Looking ahead, they would like to produce a few more well-bred trotters without increasing the overall size of the broodmare band.

“We’ve built a couple barns in the last few years and a lot of paddocks, really built the place up and I’m kind of tired of building now,” said Dean with a chuckle. “It’s a lot of work now, so you don’t want to get any bigger, we’re happy with the way it is right now.”

“We have more pacers, but we’re trying to get up in trotters more,” Ashley added. “But it’s tough to get a nice trotter. Last year we went and bought a yearling filly just because of her pedigree.”

For now, the pair is focussed on having the yearlings in tip-top shape for the upcoming sales. Once the last yearling has left for its new home they will wean and work with the 2021 foals, before beginning preparations for the 2022 foaling season.

“It’s just a cycle. There used to be a break, but now it’s just a big cycle,” said Ashley with a chuckle. While the cycle requires countless hours of time and dedication, it is clear the couple would have it no other way.

“Nothing is more gratifying than raising a foal that goes on to win a race,” said Dean.