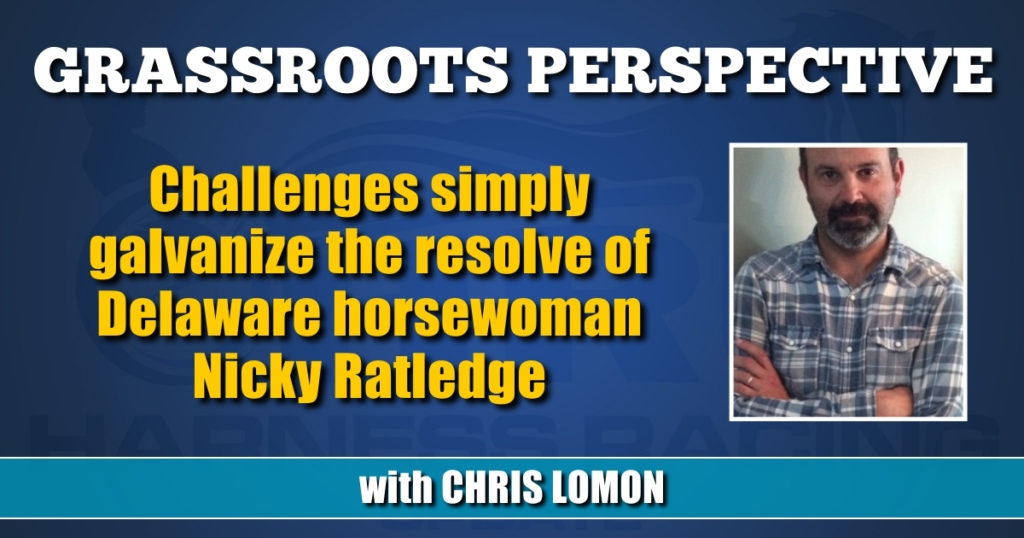 A quiet resolve, an unspoken determination, and finding belief in herself, has given Nicky Ratledge the racing career she had long hoped for.

There have trying been times, more than a few, where it would have understandable if the horsewoman from Camden, DE, had shifted gears and changed careers.

But nothing she’s faced over the years, on or off the racetrack, has ever prompted Ratledge to contemplate her life in standardbred racing.

In fact, any challenge, be it big or small, galvanizes the 34-year-old’s seemingly unbreakable bond with horses and horse racing.

A local doctor discovered that the moment he met Ratledge.

“I’ve had a broken ankle for the past three months and I’ve still been working every single day. The doctor told me that normally, they’re telling people they should take time off work, and they’ll say, ‘Great… can I have a note?’ But that’s not me.”

It hasn’t been for as long as she can remember, certainly not since she began her career in horse racing 16 years ago.

“I was working three jobs and my mom was going through breast cancer. I was also going to college at the time. So, it was a struggle for my mom. It was also tough, in a different way, for me. One of the jobs I had was giving riding lessons at one of the farms I had always ridden at. One of the kids, their father was an owner for (trainer) Tim and (assistant trainer) Patty Crissman. He told me that he had a perfect job for me. I was struggling handling everything, so he told me to come to talk to Tim. I let them know that I wanted to stay in college, but wanted to work as well. They were very understanding. One day they asked if I wanted to go to the paddock and see if I liked it. I went and I just fell in love. Tim told me that I got the job as groom for their horses. I knew being in racing was something I wanted to do. It was going to be horse racing for me.”

If she had even the slightest of doubts, a horse by the name of Quick And Deadly put any thoughts of trepidation quickly to rest.

“He was the first horse I groomed for the Crissmans and he won Horse of the Meet at Harrington. It was my first year grooming, and I thought that was pretty amazing.”

There would be some twists and turns to come in her horse racing life, but no matter which barn or what collegiate classes she was taking, Ratledge’s love for the sport and its stars was unshakable.

“I’ve been with Tim and Patty, on and off, for 16 years. There was a point in time when I went back to school and worked part-time in racing. I worked for Michael Cole and Daryl Bier if they needed somebody to fill in. Before I went back to school, I owned a horse – my first one – with Tim and Patty. Her name is Whispering Rain. I also claimed a horse, Keystone Sable, who I bought just before I went back to college. I kept her and had Mike Cole as the trainer. I also worked for Art Stafford and Jay Gannon.

“So, those times, when I was in college, were about staying connected to the racing and having a part-time job. I wanted to say that I went back to college and got my degree. Needless to say, I went back to the horses because that’s where my heart was and that’s where I felt the happiest and the smartest. I came back and worked for Tim and Patty, and owned multiple horses with them. I took another year off and worked for Kyle Moore, and owned a horse with him and his wife, who I helped get her owner’s license.”

Ratledge also added a new role to her own expanding repertoire, specifically, that of breeder.

She bred Keystone Stable to Total Truth, a son of Jennas Beach Boy, who won 18 of 63 starts and over $2.1 million in career earnings.

The foal ended up with a catchy name and a doting owner.

“I named her Truthaboutnickster,” said Ratledge. “My nickname is ‘Nickster,’ so I thought it would be good for this horse. She was born in May 2015 and the moment I saw her, she just inspired me to want to take her and race her. It was very special for me. I had broken babies with other trainers, but to do it on your own was very inspiring. It also made me want to get my trainer’s license. I had never pushed myself to do it because I didn’t feel I had the confidence to be a trainer. In my mind, I was a groom.”

It wouldn’t be an easy road to the races for Truthaboutnickster.

Every step forward was offset by a series of setbacks.

“She was sick when she was baby and she pushed through and when she was a 2-year-old, we broke her and got her up to probably 2:30, and she seemed off. Tim felt she was off and was battling soreness, so we gave her some rest. When she was a 3-year-old, we brought her back to the racetrack. I was working for Kyle Moore at the time and he told me to go get my trainer’s license. I felt other people were doing that job and I put her down in his name before her first race. She ended up breaking her back pastern bone, and I put five screws in her. I wanted to take care of her no matter what. I was able to get her back to good health and to the races.”

Ratledge’s history with the horse led to a new role, one she had often thought about it.

“I had gone back to work for Tim and Patty, and she told me that if I was going to work for them again, I needed to get my trainer’s license. So, that’s how I got my license, which happened in November 2018.”

She’s no doubt glad she did.

“I had Truthaboutnickster and Stompin Tom Creek as my own to train. Paul and Laurie Davis helped me out with getting M Y Rosebud, which was my first trotter. He was my first winner, which was March 4, 2019. I was pretty proud and it was great to be able to win at Dover. In the summer of 2019, Truthaboutnickster won at Ocean Downs. Getting my baby to the races after everything she had been through, I felt, ‘ I can do this. This is my calling.’ I’m so happy that I did get my trainer’s license. I took the time to be a groom, a breeder – I learned as much as I could about the business before I decided to get my trainer’s license.”

There have been other highlights for Ratledge, including a 4-year-old bay son of Sunshine Beach she co-owns with the Crissmans.

This March, the gelding, bred by Brad Grant, finished second at Delaware, a mile that prompted an immediate smile for Ratledge.

“He became the fastest racehorse I’ve ever owned. He went in 1:50.3 He hasn’t won in that time, but I just felt amazing. I thought, ‘I actually trained a horse that went in 1:50!’”

She’s hoping to experience more of those moments.

Increasing the number of horses to her stable is in the works.

“I hope to train five one day. I don’t know if I’ll ever have a bigger stable than that, but I feel very lucky. I not only have Tim and Patty as owners, but I had someone come and ask me to be their trainer. I accomplished that this year. Mr. Tom Wescott. He and his wife asked me to claim a horse and train it for them. His name is Paprike Blue Chip. He won back-to-back races this May at Harrington.”

Win or lose, Ratledge knows she can count on the Crissmans for unwavering support.

It’s one of many reasons she looks forward to heading to the barn each morning.

“Tim and Patty have been my biggest backers and I’m so glad to have that connection with them. Whenever I feel like I can’t do something, they are there to encourage me. I go out there and do it. I wake up every day, and I’m enjoying every single minute of this ride. I’ll never complain. I have a big list of things to be grateful for.”

That list would include a cherish moment with Keystone Sable.

The daughter of Western Hanover, who won 18 races along with 19 seconds and 15 thirds from 129 starts, showed she hasn’t lost a step, albeit in a much different arena.

“She was the second horse I ever owned and I kept her. I have accomplished a lot with her. The most recent was taking her to the National Standardbred Horse Show this past year. It was my third year with her. She loves the speed events and we won the Sam McKee barrel race in 19.1 seconds. It was amazing to take an 18-year-old mare and win something named for someone who was such an inspiring and wonderful person in standardbred racing. This mare, we have built this bond. She’s my horse and I am her person.”

It is, in many ways, the ideal story to sum up Ratledge’s association with horse racing, a tale of a longstanding connection that has only grown stronger over time.

The horsewoman from Delaware is excited to see what the future holds.

“I love what I do. A lot has changed for me since I first started in this business. I’m very lucky and I can’t wait to see what lies ahead.”