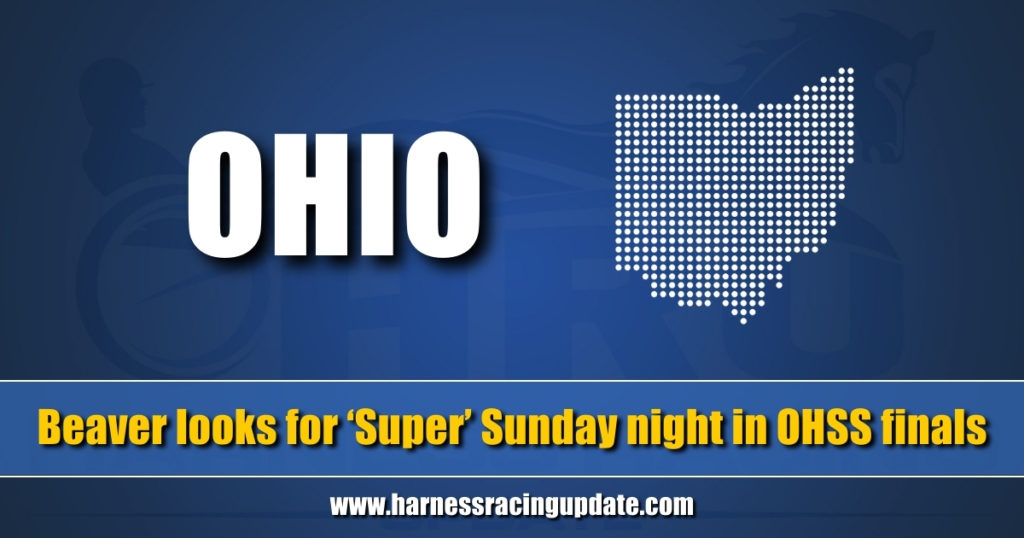 Chris Beaver has had big nights racing in the state of Ohio and tonight (Sept. 5), the conditioner/co-owner has the morning line favorite in three events during the $2.4 million Ohio Super Night at MGM Northfield Park.

Winning Ticket is undefeated, a perfect nine-for-nine, and has earned $189,500 this season. The Triumphant Caviar–Lotto Winner colt has 13 wins in 17 career starts.

“Post #6 is fine. I just hope everything goes clean and nothing stupid happens. He should be good,” Beaver said.

“They were coming off a couple of hard miles (Ohio State Fair and OHSS second leg). They would have had to race another hard mile and I didn’t think would be good for them at all,” said Beaver.

“Everything is about the final. It goes for so much more than the legs. My goal is to have them as good as we can for the final.”

Both colts returned for the fourth and final OHSS leg on Aug. 21 at Eldorado Scioto Downs, where they both suffered their first defeats of the season with a second-place finish.

Caviar Gold is owned by Beaver, Zeehandelar, Bill Manges and Leo Fleming. Gabby’s Bit Coin is co-owned by Beaver and his mother, Johanna, who bred the Uncle Peter–Gabbysloosechange gelding.

The third Beaver entry is The Mighty Hill (Brett Miller), who started the season in the second level Buckeye Stallion Series, but after the What The Hill gelding established a new MGM Northfield Park track record 1:56.3 in his first seasonal start, found himself in OHSS action.

The Mighty Hill has secured four wins and $63,485 for co-owners Beaver, Donald Robinson and the VIP Internet Stable.

Caviar Roxie Due (Brett Miller) won the first three OHSS legs, allowing Beaver the luxury to give the filly the final leg off.

“It was kind of the same strategy. She was securely in the final, so I elected to skip that final leg,” said Beaver.

“Roxie is kind of a sore filly. I had to keep her together a little bit this year. I didn’t want to get her hurt in the last leg, right before the rich final.”

Caviar Roxie Due, whose only loss was in the Ohio State Fair Stakes on Aug. 5, was a $14,000 yearling purchase by Beaver, Zeehandelar, Homan and the VIP Internet Stable.

The Triumphant Caviar–Evanora lass is co-owned by Beaver and breeder Sandra Burnett. She has been bouncing between racing in OHSS action and at the county fairs.

“It’s been a tough division,” said Beaver.  “There are three or four that are hard to beat in there.”

“Where she drew, she could pick up a good piece of it. Somebody is going to do out of there and get the trip they need, but she could pick up the pieces and get a decent check in there. She’s kind of a (1):54 trotter on her best day, so she doesn’t rank with the best ones in there.”

“She has managed to make money in just about every start this year. She’s had a good season.”

The Downbytheseaside colt is trained by Brian Brown and has earned $101,500 for the Country Club Acres, Diamond Creek Racing and the Wingfield Brothers.

Charlie May (Brett Miller) and Heart Of Chewbacca (Chris Page) will renew their rivalry in the 3-year-old colt pace.

“Charlie’ has gotten the best of ‘Chewy’ in their last three head-to-head matches and scored a big win on Wednesday when the post positions were drawn. Charlie May will leave from post 2 and Heart Of Chewbacca will be in the outside post #8.

The 16-race Ohio Super Night card with get underway at 6 p.m.