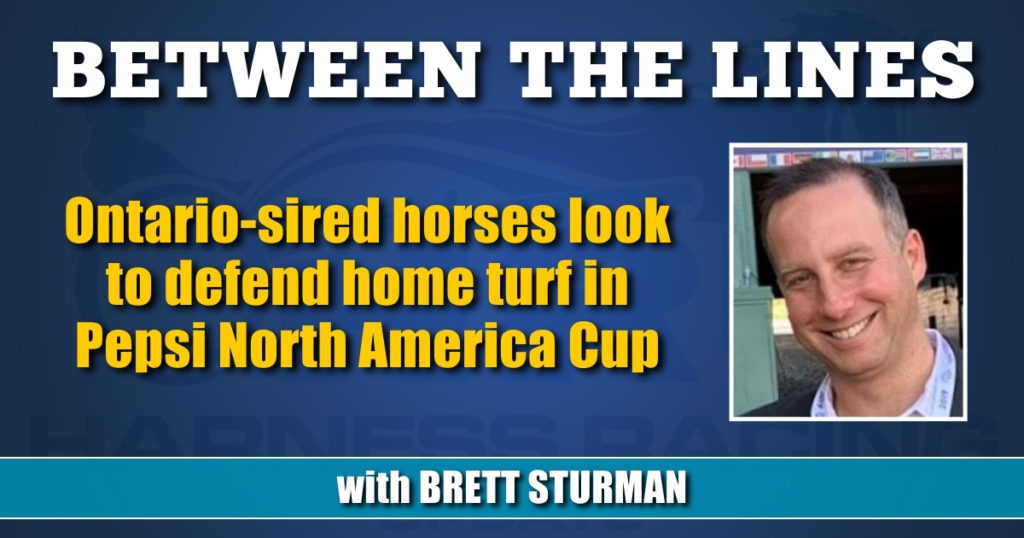 Last year, Ontario-sired Tall Dark Stranger won Canada’s most prestigious event for 3-year-old pacers. Beginning with eliminations on Saturday, there is a definite possibility the Pepsi North America Cup trophy will be won again by a horse produced in the province.

Fifteen horses have been entered for the NA Cup, necessitating two eliminations where all but two horses from the first elimination and all but three horses from the second elimination will return for next week’s final. Of the 15 sophomore pacers entered, six of those have been racing throughout the summer in Ontario Sire Stake events and they are led by an imposing Shadow Play-sired trio of Lawless Shadow, Bulldog Hanover and Desperate Man.

In a stacked first elimination that contains all three of those horses, Lawless Shadow enters off a career best 1:48.2 mile in winning the Max Hempt over Perfect Sting two weeks ago, but race favoritism may go to Bulldog Hanover, who also comes off an identical 1:48.2 lifetime best effort in winning a division of the Somebeachsomewhere stakes last Saturday.

Lawless Shadow is a curious case. His recent stretch of six races includes open stakes wins in the Meadowlands Pace and in the Max Hempt making him arguably the most accomplished 3-year-old pacer on the continent. Though during that same period, he’s a tough-to-figure winless in three starts in OSS Gold events and now comes word he has a foot abscess discovered this week (see lead story). Winners of those OSS-Gold races were Bulldog Hanover (twice) and Desperate Man. Lawless Shadow hasn’t been favored either in his last five races, and it’ll be interesting to see if the wagering public opts either to him or Bulldog Hanover in the first elimination.

Though elevated to first in the Meadowlands Pace after the disqualification of Charlie May, Lawless Shadow showed his mettle most recently in the Max Hempt. In that race that featured Hellabalou, Rockyroad Hanover and most notably Perfect Sting, among others, Lawless Shadow led every step despite being overlooked at odds of 6-1. Driver Mark MacDonald was aggressive early in that race, forcing Perfect Sting to have to settle for the two-hole. That rival got the perfect trip and somehow Lawless Shadow was able to find enough just to the wire to hang on for the win in a race that should have earned him more believers.

In Lawless Shadow’s elimination, arch nemesis Bulldog Hanover begins immediately to his inside. After dropping his seasonal debut, he reeled off 5 of 6 including a dominant win in last week’s Somebeachsomewhere. His only blemish during that time was a close third in an OSS Gold race at Georgian. In that race where the one-two finishers were Desperate Man and Lawless Shadow, he picked up second-over cover, but didn’t start gain on the leaders until late in that race and had a bit too much ground to make up. That was still a solid effort and he’s fired in every recent start for the trainer/driver connections of Darling and Jamieson.

Desperate Man shouldn’t be overlooked, either, as a contender against Ontario’s best or against anyone else in the elimination for that matter. Though just 1 for 7 on the year, that lone win came with a first-over push at Georgian to beat Lawless Shadow — who was then coming off his Meadowlands Pace first-place finish — as well as Bulldog Hanover. Prior to being second last out in the Somebeachsomewhere, he rode Bulldog Hanover’s cover in an OSS-Gold race at Woodbine Mohawk and gamely chased him home to be a close second.

Collectively, those Ontario-sired horses are not outclassed nor outmatched to what the U.S.-sired contingent sends over for the North America Cup, led by Perfect Sting and Rockyroad Hanover.

Whereas the first elimination is highly contentious on paper, last year’s 2-year-old champion and this year’s Meadowlands Pace runner-up Perfect Sting stands out in the second elimination. He’s another that fires every time he steps onto the track and it’s taken giant efforts by others in races that Perfect Sting has lost. You’d have to say that Perfect Sting is probably the overall favorite to win the North America Cup, though Ontario has the greater strength in numbers.

In addition to the North America Cup eliminations as well as eliminations for the Goodtimes and Fan Hanover, Saturday showcases the finals of the Roses Are Red, Maple Leaf Trot and Canadian Pacing Derby, which combined go for close to $1.5 million in purses.

The $316,000 Roses Are Red final goes as race 5 on the Saturday card, and is headlined by Lyons Sentinel. Aside from a daunting post 10 task in the Dorothy Haughton from July, Lyons Sentinel hasn’t lost since June and has clearly established herself as the best pacing mare in training. After back-to-back 1:48.1 wins at Plainridge and the Meadowlands, she closed with a rush in a prep at Philly. She’s typically been raced from off the pace, but I’d expect Tetrick to put her on the lead in this spot from the rail; something similar to her win in the Artiscape earlier in the summer. Rocknificent hasn’t been able to figure out Lyon’s Sentinel in recent tries but will probably attract enough wagering attention to be the primary alternative to the favorite. Her speed always puts her in play and she sprinted away late in the F&M open last week once she had clearance from the pocket. Gingras filled in that night and now it’s back to regular pilot Zeron. Woodbine Mohawk specialist So Much More gave it a game try on the front end last week and has been first or second in 13 or her 16 starts this year; will have to be used though early from the outside post. Keep Rockin A picks up a new driver in McCarthy and lends her best post in a while in a race of this magnitude; she can beat these on her best. JK First Lady and Peaky Sneaky both qualified well for Takter, they were trending in opposite directions at the time of the Lady Liberty nearly one month ago. Major Occasion A hasn’t been as strong this year as she was last year though she can land a share if the trip works out from the second-tier post 12.

It’s a familiar cast of free-for-all trotters in the $536,000 Maple Leaf Trot where once again Atlanta and Manchego square off in the latest renewal of their rivalry. Atlanta won the Maple Leaf Trot last year in one of the most impressive races in her illustrious career and, as usual, it’s hard to find fault in her recent form; maybe gets the slight edge if nothing else because of the post advantage. Manchego comes off a dead-game win in the Cashman when she dug in when it looked like she might be passed and held off Beads, who himself finally draws a good post after a series of post 9s and 10s. Back Of The Neck has limited starts this year but only missed by three lengths in the Cashman from a hopeless spot and then came back to beat Guardian Angel As by open lengths; could be a surprise. Both Forbidden Trade and Lindy The Great are talented enough to upset under ideal circumstances, these two ran 1-2 over Manchego in the Crawford Farms trot in early July.

Allywag Hanover has been in career form over the past two months and as such, has been supplemented to the $590,000 Canadian Pacing Derby. Pelling has done a masterful job in getting the high speed Allywag Hanover to deliver consistency and is now suddenly the one to beat. It’s back to Zeron for Catch The Fire who regrettably got away 9th in the #Senditin Pace last out at Scioto; beat Allywag Hanover four back and upset Nicholas Beach three back before then going onto win the Dan Patch at Hoosier. Best In Show jumped up big time last out but was able to handle it, winning the preferred and beating the likes of Sintra and Century Farroh in the process. Former Pace champ steps up again but is razor sharp. Burke sends out This Is The Plan and Cattlewash; both have been multiple stakes winners in similar races throughout the year.