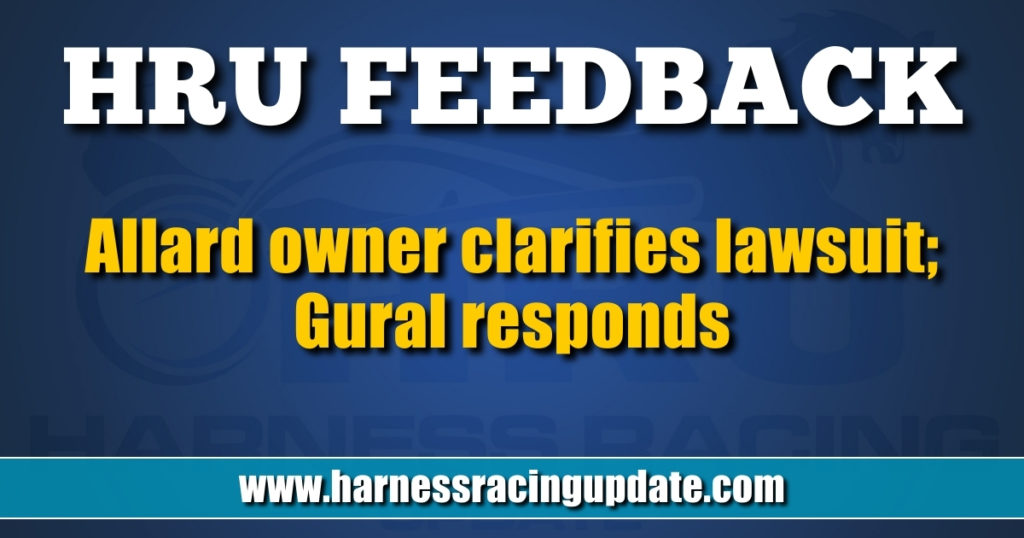 I am long-time standardbred owner. I disagree with Jeff Gural recent statement about this lawsuit (2021-08-27 edition, pg. 10). (The Meadowlands’ press release) didn’t publish everything about what this lawsuit is about… Jeff Gural is punishing us for absolutely nothing. I was forced to sell my share of horses I had with Julie Miller (Easy Rider, Pub Crawl and Sisters Choice) and Brett Pelling (When Dovescry and Springsteen) but these horses had no affiliation with (Rene) Allard who, by the way, was training babies in Florida legally with the approval of the courts and is innocent until proven guilty. But because my name was on the ownership of these horses with Pelling and Miller I had to sell my share for well below the market value of these horses and therefore after I paid into all the stake payments I will lose out on all the stake races at the Meadowlands, Tioga and Vernon Downs Racetrack.

Also, VIP Racing Stable had a horse in the Allard stable in Florida but they were allowed to race at the Meadowlands because they have a financial relationship with Gural which is very unfair and is discrimination which is part of this lawsuit.

Mr. Gural is clearly abusing his power as a racetrack and horse owner by him not letting us race in these prestige races so he can have a favorable outcome.

Editor’s note: We asked Jeff Gural to respond to Singh’s letter. He replied as follows:

I met with Kap Singh prior to Allard being arrested and he assured me Allard was not using drugs and wanted me to allow his horses trained by Allard to race at my tracks. I listened and actually another trainer stopped by since we were in Trotters having dinner and he told Kap what a horrible person Allard allegedly was and how (Allard) allegedly abused his horses and used (performance enhancing) drugs. When Allard was arrested I thought that was the end of it. Few were surprised he was arrested. Then I was given info that Allard was training 20 horses in Florida and I was shocked. I asked (Meadowlands security chief) Brice (Cote) to see if we could identify the owners as I have always thought the best way to clean (the sport) up is to go after the owners who pretend that they had no idea their trainer was using drugs. I did not buy into the claim that (Allard) was just training them down and was not going to be involved when they raced. I told the owners that called me that they could reapply to race next year before the yearling sales and I most likely would agree if there were no undisclosed ownership interests.

VIP consists of multiple owners in various syndicates who most likely had no idea who Allard was so I did not want to punish all of these people. Unfortunately, rather than reapply to race in the future, they opted to sue, which is their right and I will vigorously defend my actions. Mr. Allard will have his day in court and we will see how that goes