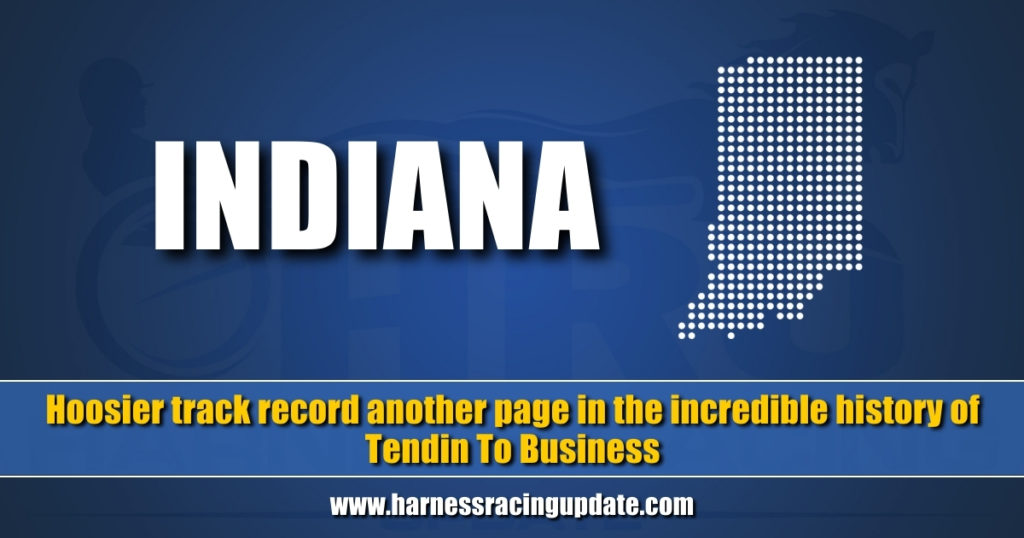 The offspring of Tendin To Business have greatly benefitted Brett Boyd and his family over the years, and Friday night (Aug. 27), the bloodline tracing back to the Lon Todd Hanover mare once again delivered, this time in a way that could have bigger implications this fall. Fulfullnmydestiny, a fourth generation Tellitlikeitis freshman bred by Boyd, turned in a spectacular mile at Harrah’s Hoosier Park in one of three Indiana Sires Stakes divisions on the program. Steered by trainer James Yoder, the gelding circled the oval in 1:50, winning by seven lengths while producing the fastest mile ever recorded by a freshman at the Anderson oval.

“He’s just been a special horse right from the beginning. It was just something to see him coming home last night. I was in awe,” Boyd said Saturday, still processing the win. “I got pretty emotional because of the victory. He’s a freak, but what a nice horse, too. We’re just extremely blessed.”

To appreciate the significance of the win, one has to dig into the freshman’s pedigree. Boyd’s parents, Roger & Karen, purchased Otaro Hanover mare Shiaway Elise in late 1987 and bred her the next season. A winner of just over $90,000 on the racetrack, Shiaway Elise went on to produce five foals, two of them mares. The second mare — fourth of the five foals — was Tendin To Business. As a racehorse, Tendin To Business reached the winner’s circle once as a 2-year-old, taking a mark of 2:05.1 on the half. As it turned out, her greatest contribution came as a broodmare.

Over more than a decade, Tendin To Business turned out incredible talent. Of her 10 foals, nine were winners, with all but one collecting double-digit victories. Corporate Rrraider, a gelded son of Keystone Raider, is the most accomplished of the bunch, with $842,764 on his card and a mark of 1:51. Bestinthebusiness, a 2008 foal, is the last active foal, currently racing at Tioga Downs and trained by Boyd’s son, Braxten. Dividend Dar, a Keystone Raider mare that collected 43 wins during her career while banking a little over $250,000, continued the lineage for the family. Her first of three foals was Driven By Destiny.

“Dividend Dar was a track record holder at Hazel Park and a very good upper class horse, so it’s definitely part of the pedigree, the success,” said Boyd. “Actually, it’s kind of comical because she (Driven By Destiny) was not one of the best. She had her times where she didn’t want to race a lot. I actually sent her to Minnesota as a three year old with Gene Miller because she needed some softer company. We sold her at the end of her three year old year.”

The story may have ended there but fate intervened. Dividend Dar was lost after sustaining a broken leg. The mare had only produced one filly from her trio of foals, and Boyd’s wife, Brandy, made a suggestion to her husband.

“She said to me, ‘Maybe we need to get Destiny back because that’s the last of your dad’s breeding line,’” he said.

The family reacquired Driven By Destiny and bred her in 2016 to Indiana stallion Time To Roll. The subsequent foal, named Rolls Royce, didn’t make it to the races. The colt sustained an injury as a yearling that kept him from the track. After unsuccessfully breeding to Time To Roll in 2017, Boyd selected Tellitlikeitis for the 2018 breeding season.

“I study the breeding quite a bit and the hypothetical mating with Tellitlikeitis lined up really well. Driven By Destiny was a quieter mare. We’ve had success with Tellitlikeitis previously,” Boyd noted. “We thought it would be good to breed a little bit quieter mare to Tellitlikeitis because they can be kind of spicy. The mare was quiet and not real aggressive and thought she would match up well.”

Boyd breaks and prepares his babies before sending them on. Prior to shipping Fulfullnmydestiny to Yoder in Bell, FL, the Michigan-based horseman had a sense that the young pacer was different.

“He was just an impeccable specimen, right from the beginning. He’s just a gorgeous individual. You could just tell from the beginning. He just had the look. He had the conformation, he was intelligent,” he explained. “We were excited about him, and when we broke him last fall he just took to everything so easily.”

Boyd and his wife traveled to Florida Valentine’s Day weekend to visit James and his wife, Cheyenne. He trained the gelding while there, and the freshman made quite an impression on the owner and breeder. So much so that he staked Fulfullnmydestiny to the Elevation at Hoosier Park as well as the Breeders Crown.

“I’ve trained horses for a long time, and when I trained him that weekend I was just goosebumps,” said Boyd. “Even the picture last night, his feet are a foot off the ground. It was the same thing when I trained him down in Florida. He has an incredible gait.”

In five starts this season, Fulfullnmydestiny has registered two wins and a pair of runner-up finishes. In the opening round of Indiana Sires Stakes, held July 11, the gelding finished half a length behind Soaring Now in 1:51 at odds of 31-1.

After the race that night, Yoder called the owner. His message: let’s pick our spots with this horse. Since that race, Fulfullnmydestiny has recorded back-to-back Indiana Sires Stakes victories. In the second leg, Yoder guided the gelding to a 1:51.1 triumph in the $69,500 division, turning in a :26.1 last quarter to win by more than two lengths. Friday night, the trainer eased him out from post position two to settle in fourth early in the $47,500 event. Brushing up the backside, Fulfullnmydestiny took control before the half (:55.3) and sprinted away from the field by more than six lengths in the turn (1:23) before reaching the wire in the record mile.

“His last win I remember sitting there and looking at the program and thinking, ‘Oh my goodness, we actually bred a colt that paced in 51.1.’ I was frozen, in awe that we had a colt that went that fast,” said Boyd. “Last night, it’s so scary, but he did that totally within himself. We’re very, very blessed and very thankful.”

Boyd and Yoder are charting a path for Fulfullnmydestiny where a trip to the Breeders Crown could become a reality. Last year the team had their first taste of the Crown, held at Hoosier Park, with Katkin American. Unfortunately, a broken cannon bone sustained while warming up resulted in the then five year old being a late scratch from the $500,000 Open Trot.

“We have never really staked to that kind of level, but James has proven that he’s just one hell of a trainer. He’s proven he can get them to the Breeders Crown. Unfortunately, last year was just so heartbreaking. We finally got a horse to the Breeders Crown and then have to scratch 45, 50 minutes before the race. But at least we got there,” Boyd said.

“We got a little taste of the Breeders Crown, and then when I trained the colt in February and talking with James, I know it’s a longshot, but we’ve got to take a shot. To be honest, it’s kind of been on our radar. I know that’s a mouthful for two guys from Michigan and Indiana. I guess we’ll stick our toe in the water with the Elevation. I’m sure there will be some top colts in there, and we’ll see where the rest of the season goes.”

Fulfullnmydestiny is providing Boyd’s family and Yoder a chance to dream big. Roger Boyd passed away 18 years ago, but the legacy of his homebred lives on. The latest success adds to what Tendin To Business first started.

“My dad, many years ago, he got a good pedigree line. Tendin to Business kind of started everything,” he added. “She had many good horses for our family. We’ve been blessed for almost 20 years now.”