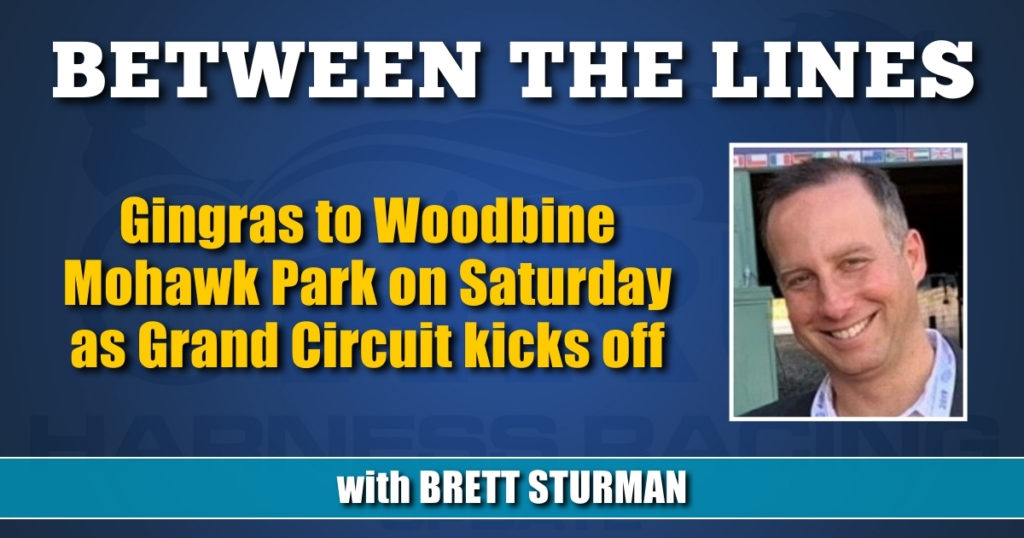 Driver is coming to Canada off a 1:48.3 world record mile with Caviart Camden in Kentucky.

Racing this summer has seen more than its fair share of dramatic finishes in high quality stakes at tracks throughout the Midwest and East Coast, and now the Grand Circuit shifts north of the border. Beginning with the Champlain Stakes last night (Aug. 26) and continuing with stakes rich events over the next four weeks, highlighted by the Pepsi North America Cup and Mohawk Million, Woodbine Mohawk Park is about to take center stage.

The same races were conducted last year, though they took a different form considering year one of the pandemic. In addition to racing without live spectators, most U.S.-based drivers who would have made the trips otherwise, were unable to do so because of the strict protocols in place between Canada and the U.S. Now, with the harshest restrictions lifted, racing will take on a more traditional look.

Dave Landry | Yannick Gingras will be racing at Woodbine Mohawk Park on Saturday for the start of the Grand Circuit season at the Ontario track.

Driver Yannick Gingras was one of the few U.S.-based drivers to compete at Woodbine Mohawk last September, and he makes his return there tomorrow being listed to drive in 10 of the 13 races on the Saturday card. He expects a smooth process. For the current state logistics involved in travel between borders, Gingras said, “It’s always evolving, but I have dual citizenship so that’s why for me, it wasn’t a problem. Even though last year you had the mandatory quarantine process that you don’t have to worry about now, and if you’re fully vaccinated and have a negative PCR test within 72 hours then you’re good to go. And it’s the same thing for U.S. citizens and permanent residents, so it’s pretty much open to everyone, provided you’ve been vaccinated.”

Accordingly, traveling to race in Canada last year required a lengthy commitment, but this year drivers have the flexibility to travel up and back by the day. In fact, Gingras will be driving at The Meadows on Friday, Woodbine Mohawk on Saturday, and then back to Tioga for a 1 p.m. post time on Sunday. “Same as with the other guys too,” Gingras said. “Jody (Jamieson) and Doug (McNair) were just at Scioto and Hoosier and they were able to come here and race and go back home and race the next day, it’s the same thing on both sides.”

Gingras’ plan will be to race in the U.S. during the week and race at Woodbine Mohawk on Saturdays. One horse that could make his way to Canada that Gingras would drive is the newly crowned co-world record holder, Caviart Camden. The Huntsville 2-year-old comes off an amazing 1:48.3 mile at the Red Mile and is nominated to the Metro Pace.

“It’s going to be up to Tony (Alagna) and the owners to decide what the best path is and we haven’t even talked about it yet,” said Gingras. “He’s a very nice colt obviously, he’s got really high speed, and we’ll see if he makes his way up to Canada.”

Sent off as the second choice at odds of 8-1 in a Kentucky Championship Series race, Caviart Camden closed from off the pace in :26.1 to beat the heavily backed Pebble Beach by a neck in that world record mile. Considering that Caviart Camden was timed individually with a :29.1 opening quarter, his effort to get to 1:48.3 can’t be overstated enough. Gingras was one not caught off guard by the performance.

“The race time I was a little surprised because it was a slow first quarter, but then we were moving along really good,” said Gingras. “As far as beating those horses, I wasn’t surprised. His first lifetime start really impressed me, the first time I drove him, and the second week was a screw up on my part. I left when I shouldn’t have and then used him too hard, so we went back to the drawing board and raced him covered up. And then the following week at Lexington he got completely taken out of the race and it wasn’t his fault, so maybe those starts didn’t look quite as good as he really was, but I had a lot of confidence in the horse and think he’s as good as anybody.”

In that 1:48.3 race at the Red Mile, there were six horses, including Caviart Camden. Five of those paced in 1:49 or better. It’s a trend that we’ve seen time and time again where in these world record miles, there’s always horses who are individually timed that – not coincidentally – exceed a faster time than anything they’ve dreamed of pacing or trotting previously. All horses go faster when being in a fast race.

Asked about that phenomenon, Gingras said, “My opinion is that any time you have a really hot pace, it’s going to lead to fast races. These horses can go almost a whole mile at full speed, and you might get beat by the second, third, or fourth horse like exactly what happened in this race, but they can carry their speed so far at a mile these days. And the reason you don’t see more 1:46 miles these days is because we don’t have it in our head to go to the half in :52 or :53. If we just went all out from the start and went to the half in :52 you’d see a 1:45 mile at some point. But we have an agenda to try to rate them and save them so that the guy sitting second, third or fourth doesn’t beat you. And of course, we do use them hard at times, I’m not saying that we don’t, but if we just let them roll all the way you would see some scary miles. I really believe that if you had the right horse on a good hot day and on the right track, you could see a 1:45 mile no problem.”

There’s a number of horses that Gingras is looking forward to driving over the next month including Caviart Camden. potentially .as well as This Is The Plan and a number of exciting 2 and 3-year-olds, but one horse came first to mind. “Of course, Atlanta, I’m looking forward to racing there. She won there last year (in the Maple Leaf Trot) and it was probably the best race she’s ever raced for me, she was scary good that day.

“It’s a really exciting month. There’s a lot of big races and this is what you work hard for, to have some power in those races. Everyone has worked for basically the last six months since the spring to get your horses to this point and the next month it’s Canada and then it’s onto Lexington and then the Breeders Crown. The next 10 weeks is what it’s all about and hopefully we can have some.”