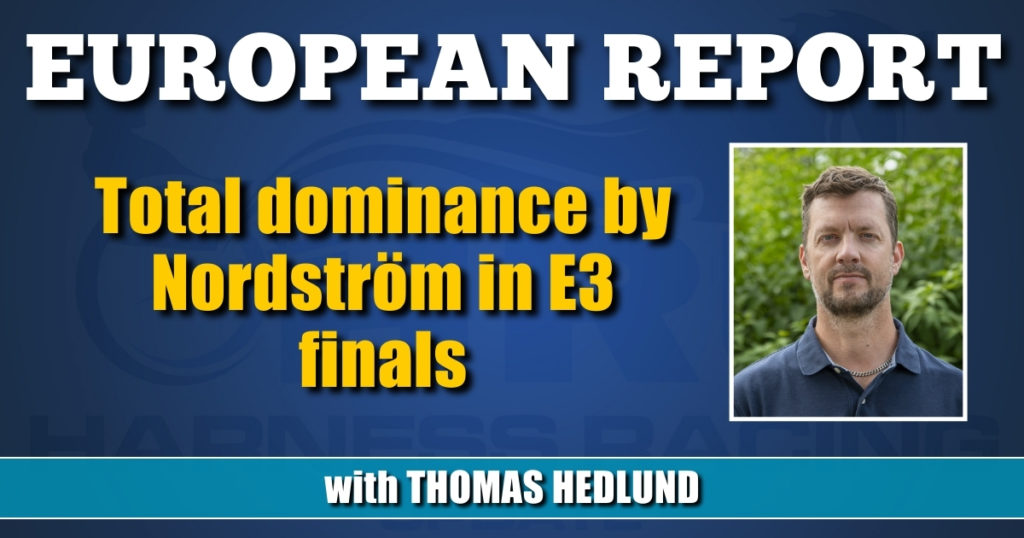 Two divisions of the $225,000 E3 for 3-year-olds were held at Gävle racetrack on Saturday (Aug. 21) afternoon and trainer and driver Per Nordström dominated.

Nordström is experiencing his best year ever as a trainer and was the title defender in the division for colts and geldings since his Felix Orlando (Orlando Vici) claimed the title in E3 over 1.3 miles in early July.

The son of Orlando Vici did not have his best day in the eliminations two weeks ago and finished fourth, but with only two eliminations, where the top six horses qualified for the final, Nordström had a shot for a pretty good post when the draw was made. Felix Orlando started from number 6 behind the gate.

Felix Orlando was in better shape this day, so Nordström sent his horse to the front after the first turn and could then control the race as he wanted. Heavy favorite Francesco Zet found a second over trip, but seemed tired already in the last turn and dropped down in the field, while leader Felix Orlando sprinted in fresh style over the stretch.

Felix Orlando won in 1:55.1. Francesco Zet found new power over the stretch and finished second ahead of pocket runner Dowhatyoudodowell.

This wasn’t the end of success for Nordström in E3. In the fillies’ division, he sat behind the first choice Islay Mist Sisu (Beer Summit) and from post 2 the duo easily came to the front at an early stage of the race. Örjan Kihlström sent Jerry Riordan trained Ain’t Misbehavin to position first over with a kilometer to go and at mid home stretch it seemed like Riordan’s trotter would disarm the leader. But Ain’t Misbehavin lost her gait and made a break shortly ahead of the wire and leader Islay Mist Sisu held on when Breeze tried a serious challenge three wide the last 100 meters.

With a head’s advantage, Nordström became the big name of the day in Gävle and three out of four finals in E3 have been collected by his horses 2021. In addition, his Önas Prince has dominated the stakes so far among the 4-year-olds. Nordström’s 2021 results are remarkable. From 83 starts, he has 25 wins and $1,029,374 in earnings.

”It’s amazing when everything works this well with the horses that I start with as yearlings and then train them all the way until this day. The team is on its way towards the best year ever and it’s going to be hard to beat this season,” said Nordström.

Italian-bred Callmethebreeze, driven by Andrea Guzzinati, got a cover trip and attacked three wide in the last turn before the extra gear was put in over the home stretch. Leader Impressionist was captured shortly ahead of the finish line and Callmethebreeze came home in a mile rate of 1:58.1 over 1.6 miles.

The 3-year-old fillies battled in $116,850 Prix Guy Deloison over 1.6 miles and Franck Nivard seemed optimistic in the bike behind Francois Pierre Bossuet trained Idylle Speed (Carat Williams). Nivard was eager to reach the front position and three quarters into the race, the duo was in the lead. Idylle Speed defender herself strongly over the stretch as Ivensong challenged and the leader held on and won in mile rate of 1:59.1.

Gelati Cut (Coktail Jet), who finished fourth in Elitloppet in May, was back on the track in Paris and took a safe win from the lead for driver Gabriele Gelormini in $116,850 Prix Jockey. Gelati Cut came home in a mile rate 1:56.3 over 1.6 miles.