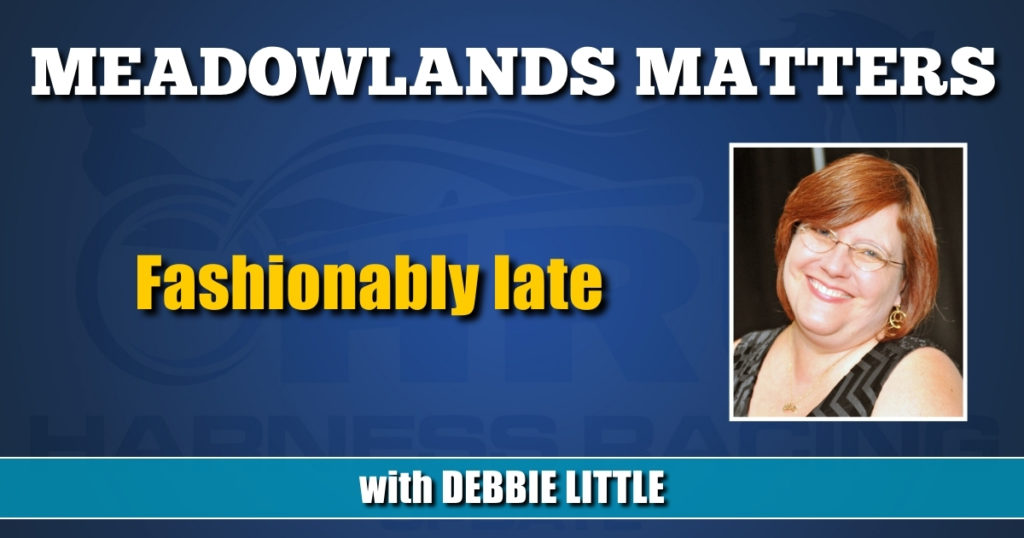 The trend towards a later post time has been going on for the last decade, shifting from 3:47 p.m. to 5:17 p.m. in just four years starting in 2011. That 5:15 p.m. window, give or take a few minutes either way, had been the pattern for eight years, save for the pandemic year in 2020, when nothing was normal.

“I would say Jeff [Gural] in the past two or three years wanted [the Hambletonian] to be the last or second to last race because he felt big events should be the closing race or have a getaway race after that,” said Moira Fanning, director of publicity/chief operating officer of the Hambletonian Society.

The Hambletonian is certainly not the first major race to lean a little later. In the past 20 years, the Kentucky Derby post time has rolled from approximately 5:30 p.m. in 2000 to 6:59 p.m. this year, also its latest in history.

“At The Meadowlands, everything is about timing to us as far as the positioning of our races, not just on a big card like the Meadowlands Pace or Hambletonian Day, but our overnight races as well,” said Meadowlands’ chief operating officer and general manager Jason Settlemoir. “We try to position ourselves so we’re maximizing the number of eyeballs on the TV sets throughout simulcasting, throughout the world.”

Many things go into choosing a race’s proper start time. Handle and attendance being two of the major concerns, but with the Hambletonian, the Society bylaws must also be considered since they state that the race must take place during the daytime.

In 1979, the pitch presented by the New Jersey Sports & Exposition Authority to bring the Hambletonian to The Meadowlands from DuQuoin, IL, involved keeping it an afternoon delight.

“DuQuoin perfected the county fair big-event venue for [the Hambletonian],” said Fanning. “It was very important to the Society, the people in the sport, to preserve that and not just have it be another nighttime big race. There’s nothing wrong with those nighttime big races, but this set the Hambletonian apart. So, they promised to keep it in the day. They promised to recreate the country fair atmosphere. It has certainly changed formats, it has changed times, but it has been preserved as the big daytime event like the [Little Brown] Jug.”

The Hambletonian has been broadcast live or on tape delay all 41 years it has been at The Meadowlands and many believe that the movement of the race is predicated on finding available air time, which apparently is inaccurate.

Since the Hambletonian is not currently broadcast on one of the big three networks – ABC, CBS, or NBC – it does not need to compete with the PGA Tour or other sporting events and therefore has flexibility.

This year it had an hour on CBS Sports Network and 20 minutes on Fox Sports 2 (FS2) during its live coverage of Whitney Day from Saratoga Racecourse.

“To be on two different networks is something that I was very happy and proud about,” said John Campbell, president and chief executive officer of the Hambletonian Society. “I didn’t have any preference whether it was the last race or not, I just knew that 6:12 fit really well in between those Saratoga stakes.”

The Hambletonian and Oaks, for the first time, were part of the New York Racing Association’s Cross Country Pick-5, which also included two races from Saratoga and one from Monmouth Park.

“It was perfectly placed, and we certainly appreciate our friends there working with us at FS2, the NYRA guys, Tony Allevato, Eric Donovan and David O’Rourke for their support and giving this a try this year,” said Settlemoir. “After speaking with Tony after the Hambletonian card, I think that we were all excited about where we were and where we could go with this in the future.”

By making the Hambletonian race 15 on the 16-race card that got underway at noon, it made for a long day in North America and a long evening for the avid fans in Europe.

Both Sweden’s ATG and France’s PMU took wagering on more Hambletonian Day races this year as opposed to 2020. The ATG took 15 races, three more than last year, while the PMU added one more race, upping their total to six.

“I think it shows you the impact that The Meadowlands’ Hambletonian Day card has, not just here in North America, but throughout the world where people are actually staying up later to watch and wager on these races,” said Settlemoir. “I think you can see that pushing the Hambletonian back to the 15th race out of 16 on the card certainly had a major impact.”

Once all the final numbers are in, Campbell and his staff will sit down with Gural, Settlemoir and their staff to discuss what to do for 2022.