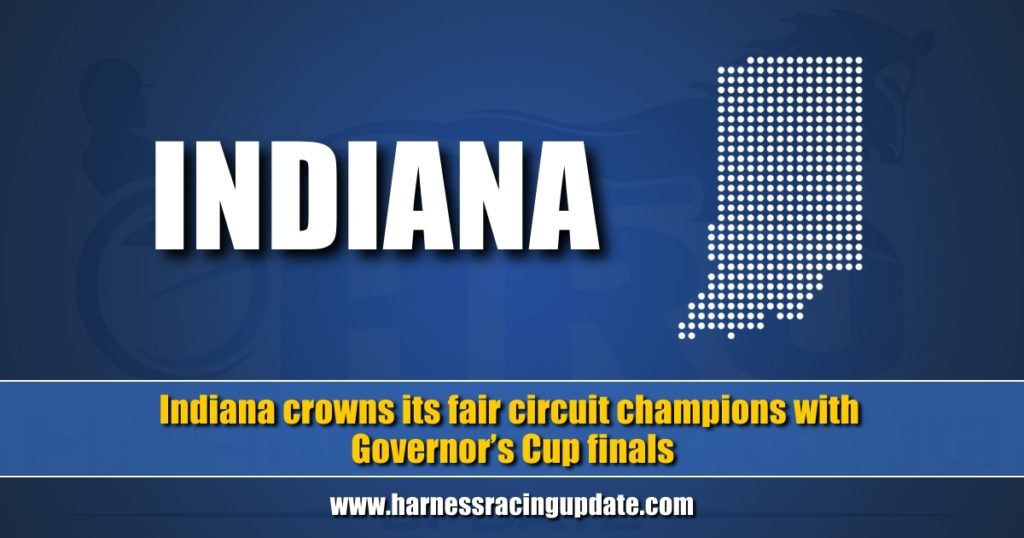 Indiana’s fair circuit champions were determined on Sunday (Aug. 15) in Governor’s Cup championships held at the Indiana State Fairgrounds in Indianapolis. The group of eight finals were originally slated for Thursday evening, but weather forced fair and Indiana Horse Racing Commission officials to push the events to an 11 a.m. start Sunday morning. This year’s editions offered $25,000 purses for each contest, an increase from the traditional $20,000 up for grabs annually.

Several horses turned in impressive performances, led by Rockin Bambi closing out her fair season undefeated. Driven by trainer Terry Skinner, the Rockin Image—Intelligence lass captured the Governor’s Cup championship for freshman filly pacers with a 1:55 effort over a fast track, winning by four lengths. Owner Ar`tarrius Fleming conditioned the freshman this winter, but had difficulties keeping her flat and enlisted the help of Skinner.

Dean Gillette | Rockin Bambi (Terry Skinner) closed out her fair season undefeated with a 1:55 victory in the Governor’s Cup for freshman filly pacers.

Dean Gillette | Luv Lorelei (Matt Rheinheimer) won the $25,000 championship for freshman trotting fillies in a time of 2:02.4 at the Indiana State Fairgrounds in Indianapolis.

Dean Gillette | Driver Jordan Ross picked up his second win on the program when he steered Swan Fine Lady (above) to a 1:58.1 win in the $25,000 Governor’s Cup final for 3-year-old filly trotters, two and one-half lengths in front at the wire. Ross also drove Northern Network to victory in the $25,000 final for sophomore pacing colts.

“He was training her himself and she was making breaks. He brought her to the track where I trained. He asked me to drive her one day for him and see what she was doing. I drove and she stayed flat. He asked if I would consider racing her for him. We came to an agreement,” said Skinner. “We knew she was a good filly, but we didn’t know she would be this good. It was a surprise and a good feeling at the same time.”

Bred by Broekhuis Stables LLC and Ernie Hochstetler, Rockin Bambi made her fair debut at Converse, IN in early June, winning by 13 lengths. She went on to triumph in six other events across the state before Sunday’s victory. The winning time equaled the championship mark for freshman pacing fillies, set by Tropical Tracey and Trace Tetrick in 2019. It is the first Governor’s Cup championship for each of the connections.

“Being undefeated anywhere is a hard thing to do now because there is so much competition. Horses are a whole lot faster,” Skinner said of the unblemished fair slate. “To go to different tracks and win every time is really hard to do. I don’t expect any horse to do that. It doesn’t work like that.”

Eight different sires were represented over the course of the octet of championship races. Luckychris, a colt from the first crop of Luck Be Withyou, collected the Governor’s Cup championship for 2-year-old male pacers in a time of 1:55.2. Trained by Curis Rice for D and R Racing Stable, the freshman earned six wins in seven fair stops leading into Sunday. Tetrick sat behind the Cletus Christner-bred winner to add his second Governor’s Cup championship in three years in this category. Rice picked up his third win as a trainer (he also owned the previous two champions), while D and R Racing added their second.

Driver Jordan Ross and Northern Network equaled a long-held championship record en route to winning the $25,000 final for sophomore pacing colts. Ross steered the Net Ten Eom—Lets Go B B gelding to a perfect two-hole trip that yielded a three-length victory. The Robert Taylor trainee stopped the timer in 1:52.3, matching the mark set by Cog Hill in the 2003 championship. Bred by Martin Schmucker and owned by Larry Poindexter, Northern Network won twice on the fair circuit this season to rank seventh in points.

Two days after nearly upsetting the $325,000 Dan Patch Stakes at Harrah’s Hoosier Park with his charge, Tellmeaboutit, trainer Alvin Miller locked up a Governor’s Cup championship with Northern Rocks in record time. Piloting the Guccio—Matriarch gelding for breeder/owner Martin Schmucker, the duo wired the field and finished four and one-half lengths in front, tripping the timer in 1:56.3. The winning time knocked nearly a full second off the previous mark of 1:57.2, set by Canwetabemnow and Mike Peterson in 2018, and equaled by Jesse Popper and Alex Udell in 2019. The victory is the fifth for Miller in fair championship events as a conditioner.

Hand Dover Dan was a quarter-length winner over Classy Tom in the $25,000 Governor’s Cup championship for freshman trotting colts. Bred by Dave Mast, the gelding circled the mile in 2:01.1. From the first crop of Dover Dan, the freshman is owned by Julie Rideout and Gracie Rosson. He was a three-time winner on the fair circuit heading into the final for Rideout, who last year captured the same division with Jessies Outlawed.

Muscle Massive filly Luv Lorelei secured victory in the $25,000 championship for freshman trotting fillies Sunday in a time of 2:02.4. Guided by trainer Matt Rheinheimer, the 2-year-old finished three lengths in front to pick up her third fair circuit win for the partnership of Alton Miller, Burt Paddock and Kyle Hupfer. The filly was bred by Larry Troyer.

Joey Putnam fanned three-wide in the last turn with Payroll Protection and drew away from the field to claim the Governor’s Cup championship for sophomore filly pacers in a time of 1:55. Bred by Diamond H Racing Stable, the Time To Roll—Sneaky Yankee 3-year-old was the final entry in the field based on points. Trained and owned by Brett Wilfong in partnership with Joseph Baron, Payroll Protection earned her first fair win of the season after recording two runner-up efforts.

Jordan Ross picked up his second win on the program when he steered Swan Fine Lady to a 1:58.1 win in the $25,000 final for 3-year-old filly trotters, two and one-half lengths in front at the wire. The Swan For All—Ladyhattan sophomore collected 11 wins in 12 starts prior to Sunday, finishing with 587 points, over 200 more than her closest fair rival. Owned by Rocking Meadows Stable, Swan Fine Lady is trained by Mervin Schmucker. The filly was bred by Kristin Wagler.