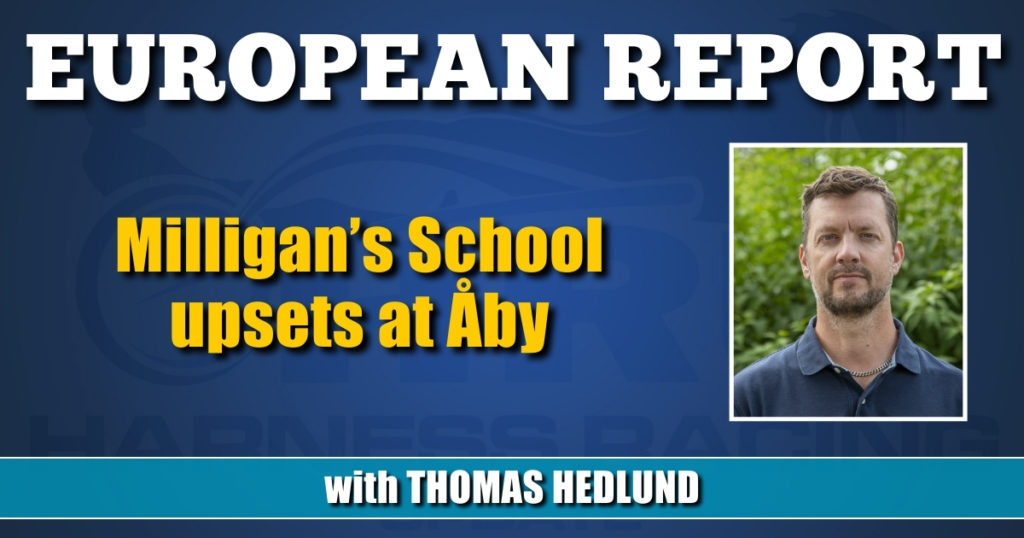 The $345,000 Åby Stora Pris over 1.95 miles closed the V75 race card at Åby racetrack on Saturday afternoon (Aug. 14) and an upset winner played with the opponents and overcame post 10.

Driver Ulf Eriksson made a quick move from post 10 when the car left the 12 horses strong field as he sent Stefan Melander-trained Milligan’s School (Yankee Glide) between horses and made first choice Who’s Who three wide as the first turn approached. Who’s Who didn’t manage to keep his gait at that point and he disappeared after going off stride.

Ulf Eriksson’s move was a winning tactic since Milligan’s School could hit the lead when the field entered the back stretch for the first time and when the duo came to the lead, not much happened in the 3,140 meters long race.

Four-year-old Bengurion Jet was left first over and driver Alessandro Gocciadoro was clearly not satisfied with that position, the problem was that none of the opponents were interested in relieving him, whereupon the pace could be set at the level Ulf Eriksson wanted with leader Milligan’s School.

French trotters Ce Bello Romain and Carat Williams tried their attacks three wide with a lap to go and Eriksson started to warm up the turbo in Milligan’s School at the same moment, so trotters from positions far back in the field were more or less without chance to challenge for the medals.

Milligan’s School held Zarenne Fas and Mindyourvalue W.F. in safe distance over the stretch and Stefan Melander’s trotter came home in a world record mile rate of 1:55.4 over 1.95 miles.

Eight-year-old Milligan’s School came from Julie Miller’s stable to Sweden during the winter of 2016-17 and has been very successful in Melander’s barn. Milligan’s School has earned $1,910,842 and has collected 30 wins in 112 starts.

5-year-olds will battle at Solvalla

The $345,000 Jubileumspokalen for 5-year-olds is scheduled at Solvalla’s Wednesday (Aug. 18) race card and 10 well-merited trotters were attracted to the race.

Horses such as Hail Mary, Admiral As, Click Bait, Aetos Kronos and Elitloppet winner Don Fanucci Zet make this year’s edition of the race very exciting. And when the draw was announced earlier this week, it’s obvious that the Swedish star Hail Mary is the horse to beat. Robert Bergh’s trotter will start from post 2 and the Jubileumspokalen has been the big objective for the horse this season.