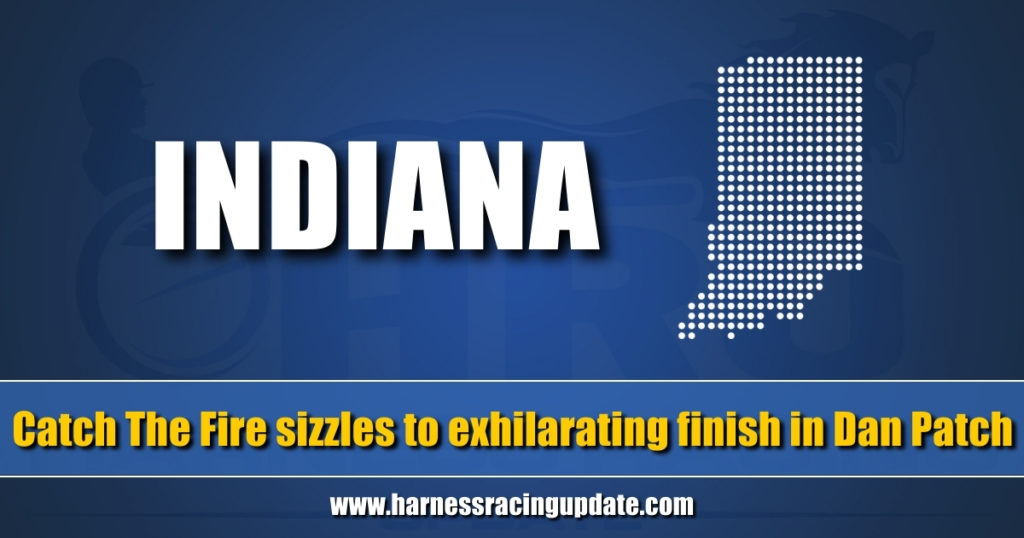 Catch The Fire sizzles to exhilarating finish in Dan Patch

Scott Zeron split through horses and won a five-horse finish by a neck in the $325,000 event held Friday night at Harrah’s Hoosier Park.

The Dan Patch Stakes has served as the backdrop for many memorable races over the last 27 years, with some of the sport’s top free-for-allers circling Harrah’s Hoosier Park’s seven-eighths-mile oval. Friday’s (Aug. 13) 28th renewal of the track’s signature event may have provided the most exciting finish to date. Favored Catch The Fire and driver Scott Zeron split horses deep in the stretch to push a neck in front in the $325,000 event, presented by Brittany Farms, prevailing in a fantastic five-horse finish in a time of 1:48.1.

“I had enough room, it was just a matter of if any driver left or right had chosen to drift. It would have gotten real tight,” Zeron said of the late surge to the wire. “I had room when I went up there and I never stopped pushing him through it. I didn’t have to check him.”

Catch The Fire has been “en fuego” of late for Greg Luther’s Black Magic Racing, LLC and CT Stables, LLC. Trained by Luther’s brother, Todd, the 4-year-old son of Captaintreacherous—Dream Outloud is riding an incredible streak dating back to late June, registering five wins in six starts, four of them by a neck. Entering the Dan Patch after scoring a lifetime best 1:47.2 in the $157,100 Sam McKee Memorial at the Meadowlands, the stallion’s latest narrow victory minted him as the sport’s newest millionaire.

“In all honesty, he’s supposed to lose a lot of those races. But he just fights so hard; he just refuses to lose,” said Greg Luther, hoarse from cheering Catch The Fire through the stretch. “They were five across the track tonight, amazing horses out there. The best in the business. To see him keep driving and do what it takes, it was phenomenal. It’s very exciting.”

Greg has been in acquisition mode over the past year, notably undertaking a “million-dollar experiment” that saw him invest in quality yearlings last fall in hopes of developing Grand Circuit-caliber racing talent. He expanded the experiment to include proven horses that can race and win now. The owner bought into the 2020 Adios champion over the winter, and the stallion has split duties as a stud and racehorse, covering 85 mares during the breeding season at Sugar Valley Farm. He is again planning to invest more, this time in breeding stock to support the stallion.

“Tonight I’m on a high. You usually don’t make a lot of money with 2-year-olds. You hope they come back as a 3-year-old. So it’s a three-to-four year plan,” he said. “We got very lucky being at the right place at the right time to get a hold of this stallion. He’s just been phenomenal. His heart; he’s unbelievable. Trust me, my experiment just went up another million dollars because I’m buying a lot of broodmares to breed to this guy.”

At the end of the 2020 campaign, Catch The Fire boasted earnings a few thousand short of $700,000 and a mark of 1:49.1. With his Dan Patch victory, he has banked just over $343,000 this season and is now the third richest horse sired by Captaintreacherous, trailing only Captain Crunch and mare Lyons Sentinel. With his ever-growing credentials, could 2021 be Catch The Fire’s swansong before moving to full-time stallion duties? Todd Luther is focused on appreciating the opportunity he has this season.

“People wait a lifetime for a horse like this and I’ve got three of them in the barn, I think. It’s an unbelievable ride, that’s for sure,” he said of conditioning Catch The Fire, Chief Mate and Captain Kirk. “I leave that up to Greg and Charlie (Taylor of CT Stables). While he’s racing, I’m going to enjoy every minute of it.”

The connections had plenty to enjoy Friday night, even if the victory was another nail-biter. Starting from post position four, Catch The Fire was in the mix early for Zeron as Cattlewash and David Miller fired from his outside along with Workin Ona Mystery. After settling into fourth through a :25.3 opening panel, Zeron brushed to the lead.

“I wanted to position him as close as I could to the front and just stay in there. I didn’t think I’d have to leave as hard as he could, get away fourth with a very good horse behind my back in Yannick (This Is The Plan),” Zeron said of the strategy. “I had a decision to make when I landed there. Do I wait and come first up? It just seems like the worst move you can make here at Hoosier. I made the decision to power move to the front over top of Cattlewash, not knowing how fast we’d have to do it. When I saw the teletimer come up (:54.1), it was okay. I knew who was coming, the train behind me. It was an easy choice to let Yannick go and put Backsteet Shadow in a bad spot.”

In the last turn, This Is The Plan led the field with Backstreet Shadow and Trace Tetrick first-up and challenging. Little Rocket Man, with John DeLong in the bike, sat second over ready to launch as Zeron and Catch The Fire waited along the pylons in the pocket. Once again, Zeron had a choice to make; hold until the passing lane and slip to the inside or look for room between horses.

“I don’t drive here regularly, so I don’t know how great that passing lane is, because it’s way up there down the stretch. When I had a little seam to go to the right, as long as I didn’t get pinched, I’d definitely have full clearance for my race bike,” he said. “By the same token, this horse just loves to race other horses. To make him split through them, he would go through them a lot quicker than he would if I pulled him down to the rail to go inside of one. It worked out.”

Finding the seam between This Is The Plan and Backstreet Shadow, Zeron and Catch The Fire seized the opportunity, shooting the gap and collecting their third straight triumph as a team. Indiana Sires Stakes champion and local entry Tellmeaboutit could see the field racing out of the final turn. The Alvin Miller trainee, sent off at odds of 69-1, stormed down the center of the track for Mike Oosting, reeling in the field with a :25.2 last quarter and lunging in the final strides to nearly steal the show with a close second. Backstreet Shadow and Little Rocket Man, a Hoosier Park fan favorite, each fought gamely in the lane to finish third and fourth, respectively, while This Is The Plan was fifth, three parts of a length back. Catch The Fire returned $4.40 – $3.40 – $2.80 and Tellmeaboutit paid $35.00 – $9.60 while triggering a $205.20 exacta. The trifecta paid $455.30.

“That was a genius move. Once they settled he made a smart move to the front. I saw a horse coming hard and I said we’re going to be pushed the whole way, but it turned out it was This Is The Plan. That’s a good helmet to follow,” Greg Luther said of watching the race unfold from the apron. “So we got a really good two-hole trip behind him, kind of like in the Sam McKee. Scotty can drive this horse any time he wants because he’s putting him in the right spots, for sure.”

Catch The Fire’s triumph is only the second time in 28 editions that victory was determined by a neck. Mister Big prevailed over Winbak Speed in the 2009 running, narrowly edging ahead in a two-horse photo. For an event that attracts some of the top speed horses annually, Catch The Fire becomes the 15th 4-year-old to claim a Dan Patch win. He is also the 13th favorite to reach the winner’s circle. The victory is the first for all connections. In three previous attempts, Zeron’s best finish came in 2016 steering Shamballa to third place, dead-heating with All Bets Off.

“It’s a great race. You get the best of the best. From anyone watching, even sitting in the race bike, it was a pretty exhilarating race. You beat the best aged pacers, it’s a great feeling,” Zeron said of his breakthrough win.

Greg said the plan is to give the stallion a well-deserved week off. He hopes Catch The Fire will receive an invite to the #Senditin Stakes at Scioto Downs, their home track. A ship north of the border for the Canadian Pacing Derby is also on the slate.

“It’s an amazing ride,” he said, clutching the Dan Patch trophy and beaming with pride. “To have the family involved, it’s been an absolutely amazing ride for all of us.”