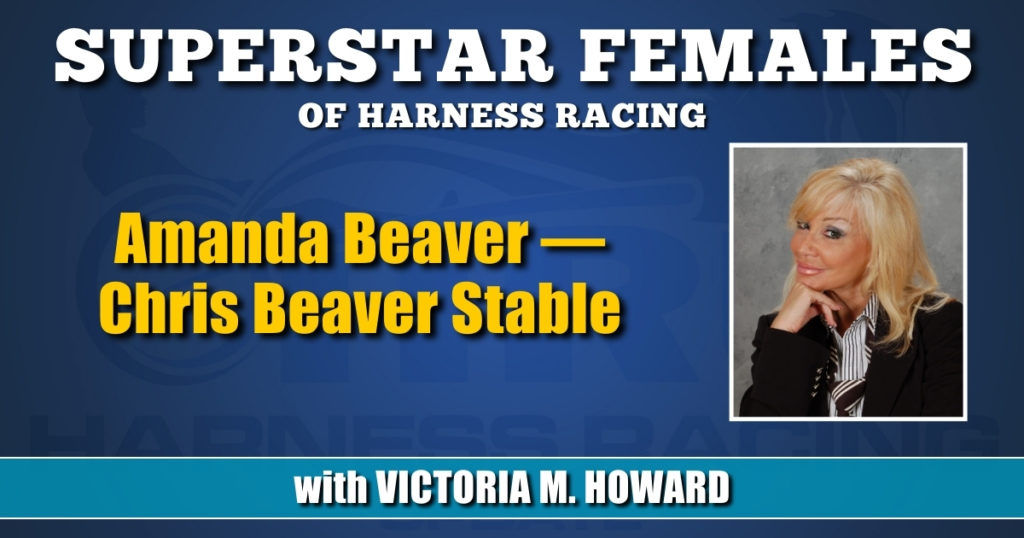 There are two sayings in life that Amanda Beaver can relate to: “If things are meant to be, they will” and “Being in the right place at the right time.” She should add: “She had an angel watching over her.” For by the grace of God she is here to tell her story.

“I was born in Ashland, Ohio. My family was not involved in harness racing, but I always wanted to work with these incredible animals so when I was younger I went to different stables looking to see if anyone needed help. I got a job working at a breeding farm — Success Acres — and immediately knew I wanted to make it my career.

“After working at the farm I got a job for trainer Ron Steck while his wife was on maternity leave and he needed help. After his wife returned to work, Ron suggested I go work for a trainer named Chris Beaver. Unbeknownst to me at that time, my new boss would eventually become my future husband.

“I worked for Chris on and off for 10 years. During that time Chris and I were both married, but years later when our marriages dissolved, we started dating each other, and as they say, the rest is history.”

Courtesy Amanda Beaver | Chris and Amanda on the track together.

And what an impact the husband and wife team has made in the sport.

“In the beginning Chris wanted to be a veterinarian, but right before starting vet school, he purchased his first yearling, a filly named RAGING SAMANTHA for $9,500 and hit the lottery. After earning almost $500,000 he ended up selling her overseas for a half-million dollars,” Amanda said.

Unlike his wife, Chris grew up in the business. His father was a horse trainer and also owned a meat packing plant. Because his parents told him he couldn’t make a living in training horses, he opted to be a veterinarian. After selling Raging Samantha, Chris decided to go all in.

It was certainly the right decision for the young man. Decades later, the Beaver Stable is one of — if not the best — harness racing stables based in Ohio.

“When we first got together Chris had 12 horses, but after working together that number grew to 40. So, I’d like to think I had something to do with that,” Amanda said.

Today, there are 55 horses in the Beaver Stable.

In the beginning, Amanda helped her husband run the Ohio farm while Chris would race in Canada. That continued until six years ago when Amanda was hit by a semi-truck.

Unfortunately, that turn of events would put an end to what Amanda loves to do the most — train — but today she is in charge of breeding and foaling the horses. It is really a miracle given the impact of the semi was quite serious.

Presently, the Beavers own 15 broodmares, but board several out until they can purchase more land.

Throughout the years, the Beavers have had tremendous success with numerous horses, such as IL SOGNO DREAM.

“I raced Il Songo Dream a lot myself — from warming him up to paddocking and shipping. Il Songo Dream liked to listen to Bob Marley before he raced. Guess he liked reggae music,” Amanda said.

“Il Songo had a personality that many people didn’t like, but he was always very sweet to me. I still love and miss him, but know he’s living a good life standing stud in Canada today.”

Raging Samantha and Il Songo Dream are just two of the many superstars who would come out of the Beaver Stable.

“CUSTOM CANTAB is one of the best horses we have ever trained She made over a million dollars during her 4-year-old career campaign and was race timed in 1:49 and change at The Meadowlands — coming within a nose of winning the Hambletonian Maturity (she was set back for interference). When she was at her best she raced against Atlanta and Manchego, finishing within one or two lengths behind them.

“And of course there’s TRIUMPHANT CAVIAR who set a world record at 3 in Delaware and earned $796,794.”

With such success I asked Amada what they look for when buying a yearling.

“Chris and I look at horses differently. He’s a bloodline guy and I’m a confirmation girl and can see imperfections quickly. I’m also good at watching the videos and the horses’ gait. My husband also taught me to look for what ‘imperfections’ he will work with.”

Although they train both trotters and pacers, Chris prefers the natural gaited athletes and has become known as a “trotting” guy.

“We train about 95 per cent trotters. Chris says he likes the trotters because he feels like he gains an advantage by using his mind to figure them out. They are a challenge and he likes taking on challenges, and it has all been good because in the end it is what he’s better at.”

When not at the farm in Ohio, the Beavers train and break yearlings at Spring Garden Ranch in Florida during the winter.

Together they have five children. The two youngest girls help their parents in the summertime as stall cleaners and grooms.

Working with your husband day in and day out can be quite nerve-wracking, but it’s not that way for Amanda.

“Anyone that knows my husband can get along with him. I’m really lucky to have him, for he is the most patient, kind, and honest man I’ve ever met.

“He works so hard. During the stake season he literally puts in 20 hours a day; and at times he’s in two to three states in a 24 hour period.”

As far as the future in harness racing, they try to stay positive. Their wish and goal is to get to the point where they can feel content with what they have accomplished.

I’m sure you will agree with me that the Beavers have nothing to worry about.