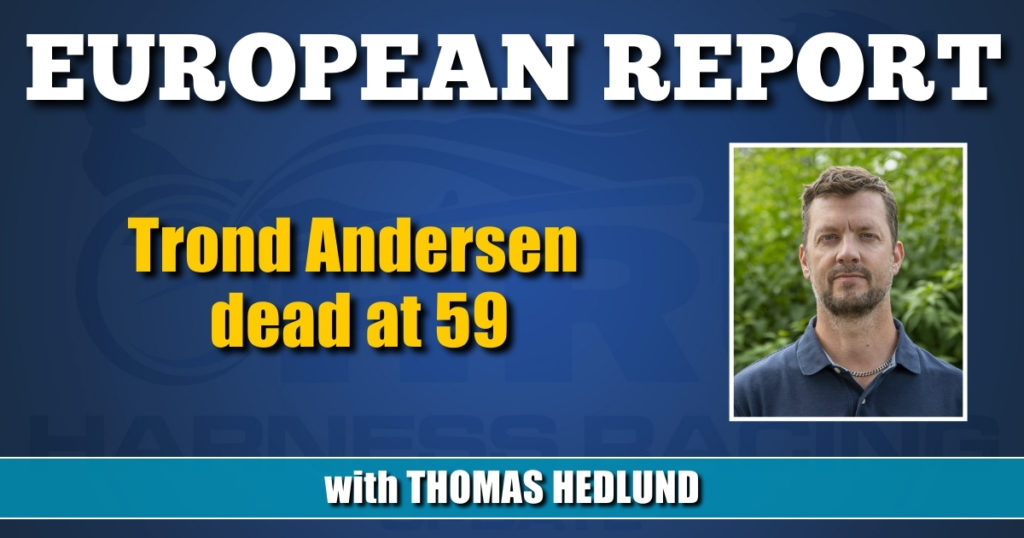 One of Norway’s best trainers, Trond Andersen, died due to cancer on Wednesday (Aug. 11) morning.

The Norwegian champion trainer from 2003-2011 produced many great trotters throughout the years and his best horse ever was probably Yarrah Boko (1:52.1, $1,282,850) who claimed several big trophies in Europe and finished third behind Maharajah and Up And Quick in the 2014 Prix d’Amérique.

ALN | Norwegian trainer Trond Andersen has died at the age of 59.

Andersen was known for his gentle treatment and behavior to other people and it was quite a shock when Andersen earlier this year announced that he was diagnosed with cancer.

His Hickothepooh claimed a ticket for this year’s edition of Elitloppet by winning the Finlandia-ajo in Helsinki in early May and the 9-year-old trotter continued to give Andersen success by winning the Ulf Thoresen Grand International at Jarlsberg, Norway, in July.

Andersen’s wife and two sons, along with the entire European harness racing, will miss a true gentleman and skillful professional.

Tough battle at Åby this Saturday

A very interesting field of horses will gather behind the gate and among them, 4-year-old Bengurion Jet (Maharajah), trained and driven by Alessandro Gocciadoro, makes the show even more spectacular. Bengurion Jet charmed the fans by winning in 1:50.3 on the night of Hugo Åbergs Memorial at Jägersro in late July and Alessandro Gocciadoro immediately accepted the invitation for Åby Stora Pris he received minutes after the race.