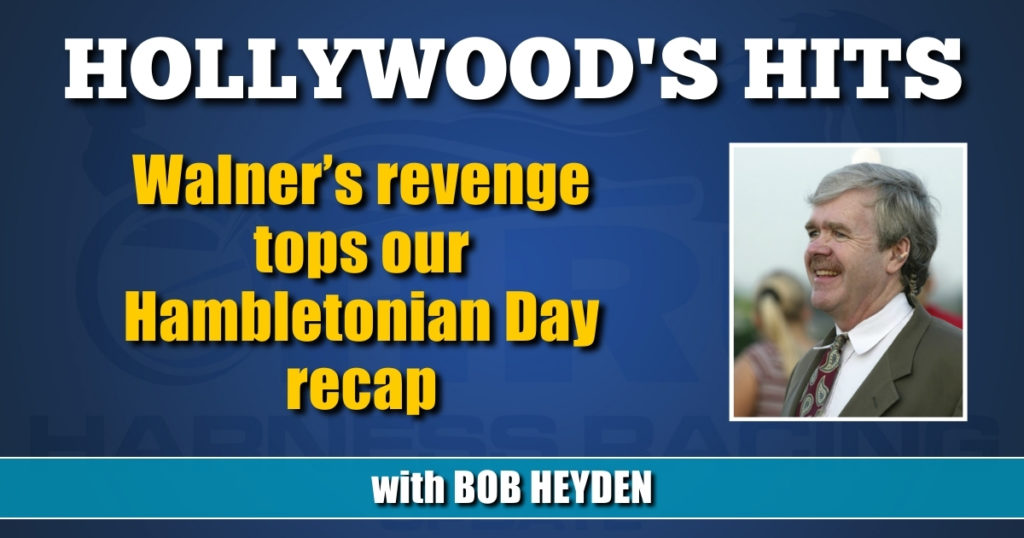 Walner did not make it to the 2017 Hambletonian. He was 2-for-2 as a sophomore and then retired. His two races at age 3 were a victory in 1:50.3 and then 1:50.2, dominating in both. But, he had a banner Hambletonian Day this year as a first crop stallion, winning the Peter Haughton and going 1-2 in the Jim Doherty. Despite the fact he only had 2-year-olds racing, he was the only trotting sire on the day to win twice.

Longshots on the board

Who are the only two drivers to hit the board in the Hambletonian final at the Meadowlands with a 50-1 shot or better?

As for Tetrick, he also hit the board in the Hambletonian Oaks with 97.20-1 shot Contested Hanover, who finished third.

This is the first time in the entire history of these two races (the Oaks started in 1971) that one driver has hit the board in both races with the longest shot in both races.

One was the loneliest number

The rail, the winningest post in Meadowlands Hambletonian history, was blanked on the day: 16 0-1-2

For the fifth time in Meadowlands Hambletonian history the oldest driver in the field won it all.

1983 — Stanley Dancer 56 (in the final; Billy Haughton, who was four years older, was in the elims that year)

In the last two Hambletonians and this year’s Meadowlands Pace, 13 of the 15 checks have gone to the inside 5 posts. Only Amigo Volo (10 — 4th in 2020) and Ambassador Hanover this year (post 9 — 3rd) spoiled the party.

One of the other

In the last three Hambletonians, the only American to get a check is Tony Alagna with 2020 winner Ramona Hill.

These broodmares were Hall over it

Andover Hall had Dancinginthedark who came in with the fastest mark of the day for sophomore trotting males and Angus Hall is the sire of the dam of the Hambletonian winner Captain Corey.

Post four just won he Hambletonian but it had been two decades since it last happened with Stefan Melander and Scarlet Knight in 2001. What is even stranger than that is the slump post 4 was in even hitting the board. In the last 19 Hambletonians, only Mission Brief in 2015 even finished in the top three.

For the fifth consecutive year, there was a three-horse Hambletonian entry (this year there was a pair of three-horse entries). This year, marks the first time all three part of an entry cashed in.

Jeff Cullipher wrapped up his first training title this year on Hambletonian Day. Thirty-four years ago, Joe Holloway did the same on Hambletonian Day taking five races to wind up at 106, breaking the track standard of 100 set by Dave Elliott in 1983.

It was the 40th anniversary of the first New Jersey Hambletonian.

The 40th anniversary year of the Peter Haughton.

The 50th anniversary of the Hambletonian Oaks.

51-1 Delilah Hanover was third in the Jim Doherty.

55-1 Spy Booth was second in Hambletonian.

97-1 Contested Hanover was third in the Hambletonian Oaks.