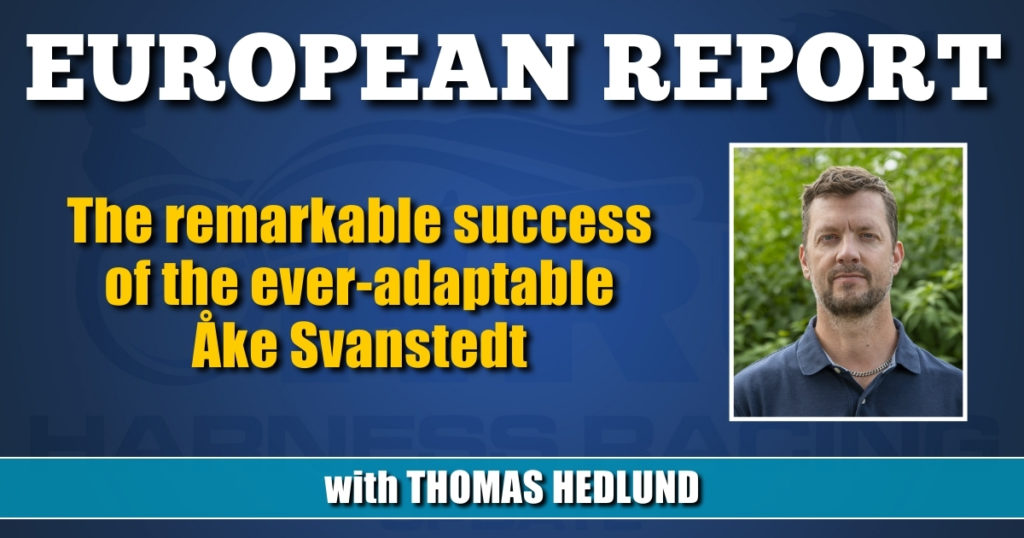 Just how talented is the two-time Hambletonian-winning trainer/driver? Consider he once made his career training older horses in Sweden and has successfully transformed into a winner of stakes races with young horses in America.

There’s nothing miraculous or strange or mysterious about Åke Svanstedt’s successes in America since he moved there from Sweden in 2013. Svanstedt was a top name in the sport in his home country by the time he left; he had established himself among the most successful trainers and drivers many years prior.

Svanstedt’s horsemanship is what people have long talked about. Some believe Svanstedt can make winners out of any horse, at any training site and by using whatever training method he wants to use.

Harness racing is in his blood, and his connection with horses from an early age has put him in an enviable position.

Though he dominated in Sweden, he was never really the trainer that collected the biggest trophies in the stakes races for 3-, and 4-year-olds in his home country. Despite the high number of horses in his stable every year, Svanstedt rarely won the most prestigious races, at least not the big ones for younger horses, making his success with young horses in America that much more impressive.

Though his stable earned over $5.5 million in 2012 in Sweden — a career best to that point — Svanstedt’s stable “only” won two of the big races for 2-, 3- or 4-year-olds that year — the $205,000 Kungapokalen (Fawkes) and the $205,000 Drottningpokalen (Love N Hate), both won on the same race card in May at Åby. The remaining 389 training wins that year came in races for essentially older horses in overnight and V75 races. Meaning he achieved tremendous results without having the best bred trotters in his barn.

As an example, consider one of his first stars in the U.S. — Sebastian K. Svanstedt brought the horse to USA after some very successful years with several wins in big races in Europe. In America, Sebastian K showed the world how fast a trotter can be on a 5/8 mile track, setting a 1:49 world record at The Downs at Mohegan Sun Pocono. Just a few weeks later, the Swedish trainer again showed he meant serious business when he moved across the Atlantic Ocean when he won the Peter Haughton Memorial for 2-year-olds with Centurion ATM at The Meadowlands in August. Racing 2-year-olds was definitely nothing Svanstedt had great success with prior to his move to USA.

It should be noted that the racing program is not at all comparable between the two countries and to be a really successful trainer in America, you need to produce trotters or pacers that race in the big stakes. Svanstedt, with two Hambletonian victories so far, has shown the harness racing world that he is one of the sport’s best trainers and it’s clear he will continue to be successful in his new country.

He has adapted to the American way of racing, both as trainer and driver, making him a winner of the biggest races in the world.

Victories as trainer in Sweden: 5,384

Some of Svanstedt’s biggest European victories: