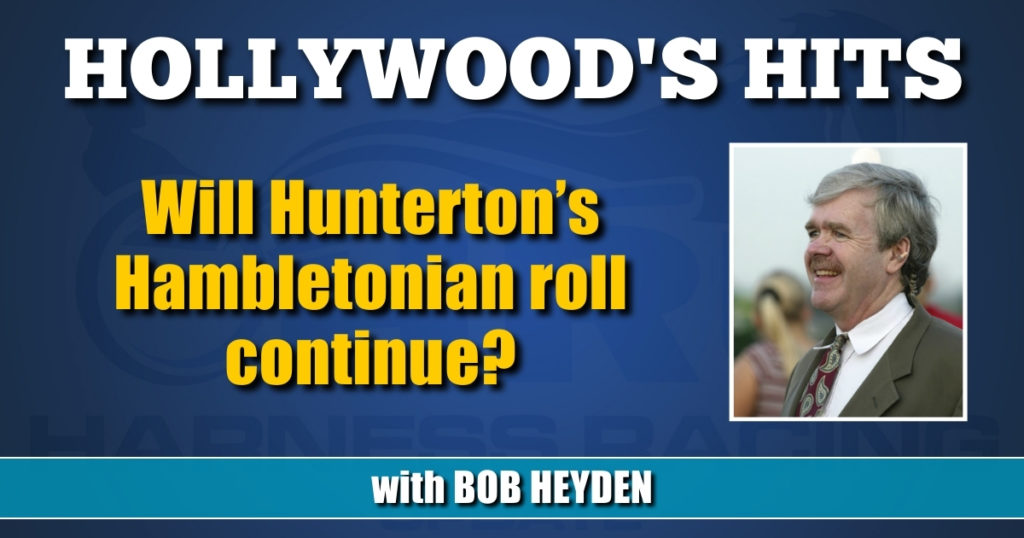 Steve and Cindy Stewart’s Hunterton Farms of Kentucky have been on an incredible roll in the Hambletonian. In fact, the Stewarts are the most successful breeder in the last seven editions.

In 2014, the winner, Trixton, was bred by Steve Stewart and partners.

In 2015, the runner-up, Mission Brief, was bred by Stewart and partners.

In 2018, third-place finisher Tactical Landing was produced, in part, by Stewart.

In 2019, the winner, Forbidden Trade was bred solely by Stewart .

This year, the Stewarts have finalists in both the Hambletonian (Venerate) and Hambletonian Oaks (elimination winner Awesome Trix) and Trixton sired Hambletonian finalist Quatro De Julio.

Recently, we caught up with Steve Stewart to discuss what might just be a fun weekend.

Steve said Venerate’s team of Andy and Julie Miller remind him of he and his wife, Cindy.

“You see one and the other isn’t far away,” Steve said. “I remember talking to (Andy and Julie) about Venerate. I said if he could somehow generate speed, watch out! He was a very powerful colt, one of the strongest I had ever raised. I like the way Andy has driven him so far at 3 — kind of keeping him under the radar. Remember his dam is a sister to Trixton — Peaceful Kemp. I think they’re going to mix it up pretty good in the Hambletonian and he is going to like that.”

As for Awesome Trix, Steve said, “She was a crooked legged $13,000 yearling. Chris Beaver does a nice job with horses like this. Remember the $6,000 Custom Cantab who beat Atlanta? Il Sogno Dream (4th in Hambletonian in 2014). Good horseman. She surprised me by finding that room up the cones, but remember in the Geers she was ready to go and really never got underway. She’s got a chance in there.”

As for his past top Hambletonian ones, Steve was happy to go down memory lane.

“(Trixton) was the sales topper. We didn’t want him getting hurt in the field. He was aggressive, a bully. fighting too much. It’s like kids going to recess. You put them in a group, but not too big. We had to put him by himself for a while, just like you do with a kid when they have to go sit in the corner. But he accepted it quite well. He was a great big kid really. When he got to the races, I don’t think he got the press he should have. He was from the first crop of Muscle Hill. We’ve been in every step of the way with Muscle Hill. I think he will be just like Speedy Crown. Back in 1991, when Speedy Crown was 23 years old, Phil Tully was selling 11 breedings to him. I bought two. Even at that age, we made out well. I think Muscle Hill will be the same. Look at how old Speedy Crown was when Moni Maker was born (25). I feel that Muscle Hill is like getting on the train. No matter when or where you hop on you will get where you want to go.”

“(Mission Brief) is back here on the farm. She and her brother Tactical Landing are both very cerebral. We paid $225,000 for the dam Southwind Serena. She’s by Varenne. She and Tactical Landing are people oriented. Every single time, even today, when I got out — I do a lot of the feeding — they are the first ones to holler, the first ones on line. Both of them. Cindy has always told me you have to keep horses moving from field to field. We do that with all our horses. Natural grazing animals. If you keep a horse in the field in their natural habitat, it is going to help. Keeping them in a stall too much doesn’t help. A yearling with some familiarity to his surroundings is going to be more confident, so we are sure to show them as much as we can in advance. Let them march right in. A stallion will walk in very often like he owns the place. We want a yearling to be familiar with where he’s going and vary it up.”

Tactical Landing: “A very imposing horse. We have Walner’s sister to Tactical Landing selling this fall. His dam Southwind Serena had some fertility issues. An athlete, a powerful one. He got better as his 3-year-old year went along. Matured. We have a lot of Tactical Landings here at the farm.”

Forbidden Trade: “His dam Pure Ivory didn’t do too well with her first four foals — so $110,000 for him was quite a lot considering. Her first few included a couple of Muscle Hills too. We got her on a board bill. The owner hadn’t paid me in three years. Fabulous looker. I think that is the reason Luc Blais and Determination pulled the trigger here. Magnificent.”

Steve said he and Cindy, “live and die by our mares. We don’t have stallions. And we raise yearlings.

“Standing a stallion is liking having an oil well. You hope for 15 years. You really should start the fee lower, then you can build on it. If you look at the history of the great stallions — Meadow Skipper, Albatross, Western Hanover, Artsplace — they all started out and built up. Gave you a chance early if you believed in them. Stallions are our kings — until they die.”

“The opportunities to make money is much better in standardbred racing than thoroughbreds. A much, much lower percentage of people do so in their sport. Some of those partnerships will tell you right out front — if you are doing this to make money, go away.

“Do things right is my advice. Don’t do it on the cheap. Go to a top five outfit — breeding, trainers, drivers. There’s a reason they are in the top group. Cutting corners is a recipe for disaster.”

Steve also said the sport should develop a school for trainers.

“Maybe in Ohio… I think Nancy (Takter) and Tony (Alagna) would love to find someone from there to help. Whether they were there six months or three years. Whatever it took. The industry could pay the tuitions. Work ethic seems to be an issue. This would be a good place to get people started and to know the business.”