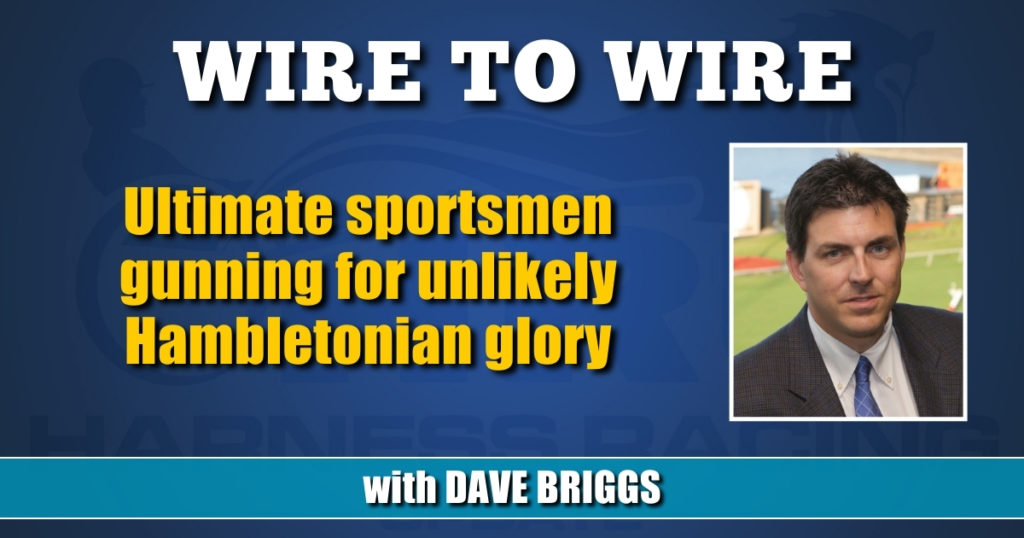 Spy Booth, like his co-owner David Anderson, is hoping to break his Hambletonian maiden on Saturday for a quartet of game, high-powered Canadian owners.

David Anderson is no fool. He is well aware that if his trotter Spy Booth pulls off a victory in the $1 million Hambletonian on Saturday (Aug. 7) at The Meadowlands it would be a monumental upset. It would also go down as a first in the race’s 96-year history. A win would make the son of Muscles Yankee—Amour Heiress the first horse to break his or her maiden by winning the Hambletonian.

But don’t fault a guy for dreaming big.

“We’re playing David versus Goliath here and trying to be a giant killer,” Anderson said. “It’s really a wide-open year. We debated about even putting the horse in, but we’re all sportsmen and we’re in it for these big days. This is the Kentucky Derby of standardbreds and we want to be in the show.”

Anderson, who lives in Aurora, ON and is a noted breeder of thoroughbreds at his Anderson Farms of St. Thomas, ON, is the man who picked out Spy Booth as a yearling, and convinced fellow prominent Canadian owners John Fielding, Robert LeBlanc and Marvin Katz to help defray the trotter’s $460,000 price tag from the 2019 Standardbred Horse Sales Company sale.

“As they say, you’ve got to be in it to win it. I’m kind of riding on the coat tails of my three lucky partners, who have already won (the Hambletonian) before.”

Anderson, like Spy Booth, is hoping to break his Hambletonian maiden on Saturday.

“It’s four Canucks invading the Meadowlands and trying to pick up a nice check if we can,” Anderson said. “We’re all going to be there. Win, lose or draw we’ll have a fun day. It’s just good to be in it.”

Anderson believes he’s raced three horses in the Hambletonian. Most recently, he and LeBlanc had Pilot Discretion in the 2019 race. The colt finished fifth and advanced to the final where he was seventh in a race won by Forbidden Trade.

Just how passionate is this group of owners about the Hambletonian? Anderson, Fielding and Katz all sit on the Board of Directors of the Hambletonian Society, with Anderson joining this year.

Spy Booth finished fifth in his Hambletonian elimination at the hands of Yannick Gingras to sneak into the final. The trotter then lucked into both the 3-hole at Tuesday’s post-position draw and the services of Hall of Fame driver Tim Tetrick when Gingras opted to drive elimination winner Delayed Hanover in the final. Tetrick drove Anderson’s first Hambletonian finalist, filly Pampered Princess, in 2007. Pampered Princess was sent off as the third betting choice and was second by a nose at the top of the stretch but made a break and finished seventh-placed-sixth.

Anderson said he’s hoping for a combination of redemption from that experience and good karma from his partners on Saturday.

“It’s the Hambletonian and the best horse doesn’t always win,” he said. “It’s all about post position and trip and we’ve seen it a million times. I’m not saying that he can win the race, but if we get the right trip, he’ll get a big piece of it.”

Getting a big piece of it would certainly help to pay off some of Spy Booth’s sizeable tab. Bred by Stefan Balazsi’s Order By Stable of Sweden, Spy Booth has earned $48,082 to date.

“I’m a breeder and that’s the first thing I look at when I’m buying a yearling – who bred the horse and where were they raised? And Stefan Balazsi is arguably the top breeder of, certainly, trotters in the world, I think,” Anderson said. “So, any time you get a chance to buy a nice horse from Stefan you know it was raised properly at Concord Stud and has the right goods.”

Anderson, Fielding and LeBlanc were buying a few yearlings together in 2019 and after the hammer fell at $460,000, Katz asked to buy a share.

“He really was a big baby as a yearling. He was quite immature and, really, I didn’t think he would make it much as a 2-year-old because of that,” Anderson said. “We always thought he’d be a better 3-year-old and, you know, he had some ups and downs along the way. He seems to be putting it all together.”

“Jimmy said to me back in the spring, ‘David, trust me, we will make money with this horse. We have to believe.’ Three starts ago, he went his fastest race in :55 and change. Two starts ago, he dropped to :52. He dropped three seconds in one start. Then he dropped again in the last race. He’s trotting home like a real horse now and trotting through the wire.”

What has helped Spy Booth maturity was being gelded in the spring.

“It was kind of an ‘attitude adjuster,’” Anderson said, laughing.

“That’s probably why he’s racing so well, but we might have an older horse on our hands. He’s sound and happy and we want to continue racing him for years to come.”

“Since being a gelding, he’s a different horse,” said Nancy. “He used to be the most sour horse. He used to try to run off the track every time you got to the exit. Now he goes out there and he’s got his ears up and is as happy as can be to do his work.”

An unlikely victory Saturday in the $1 million race would not only put Anderson and his three partners over the moon, it would put Spy Booth in the black.

“Which would mean I might be scouring around Takter’s shedrow looking for a couple of testicles to put back on,” Anderson said, laughing.