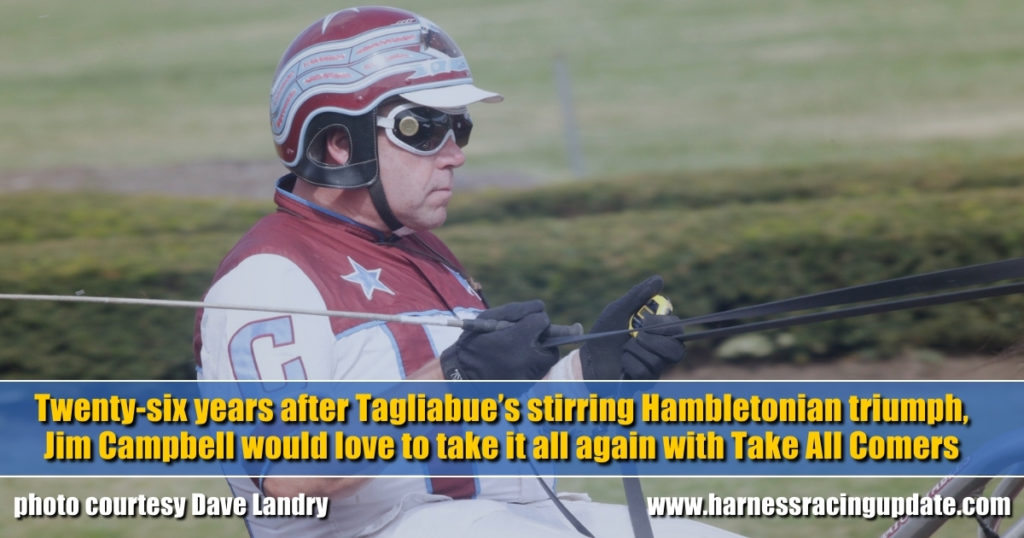 Twenty-six years after Tagliabue’s stirring Hambletonian triumph, Jim Campbell would love to take it all again with Take All Comers

Saturday afternoon at the Meadowlands, trainer Jim Campbell will attempt to reach the sport’s pinnacle with Take All Comers in the $1 million Hambletonian. A trip to the winner’s circle would be the second for the conditioner in harness racing’s most prestigious event. He won in 1995 with the talented Tagliabue, and is now in his 26th year of trying to repeat the feat.

“I rest my case in point on how hard it is,” said the veteran horseman. “That was 26 years ago that Tagliabue won the Hambletonian. I’ve been in it a few times since then, but haven’t won it. It just goes to show you how hard it can be to get in there. There are a lot of good trainers out there that have never won it and never raced in it.”

Tagliabue captured his elimination that day in 1:54.4 with his brother, John Campbell, in the sulky. The son of Super Bowl returned in the final to secure the victory by more than two lengths, delivering the coveted title to owners Jules and Arlene Siegel. Jim remembers taking note of the visual cues offered by his brother while racing the back half of the victorious mile.

“As far as the final goes, what sticks out the most to me is that John moved him to the front up the backside and as they were going through the last turn I was watching John’s whip and it was laid right back on his shoulder,” he said. “So I knew that Tagliabue had lots of go to him. When they got halfway down the lane he hadn’t even moved the whip on him or anything. He just looked like he was riding there comfortable.”

As difficult as it can be to reach the Hambletonian, Campbell has had success putting entries behind the gate as of late. Including Saturday, he has sent out starters in three of the last four finals, missing out in the 2020 renewal. His best result came in 2018 when Crystal Fashion, the favorite and part of a three-horse Campbell-trained entry, finished fourth.

“It’s hard to get there, that’s for sure. It’s something that you always shoot for any time you have a hint of hope for a 3-year-old trotting colt coming back. That’s the race you aim for,” said Jim, who joins Ake Svanstedt as the only trainers in this year’s field to win the coveted title. “There are a lot of hills you’ve got to go over to get there. Once you get there, it’s a great feeling and it’s an honor to be in the final of a race like that “

Take All Comers, a homebred son of Creatine—Nantab finished fourth for David Miller in an elimination won by Captain Corey. After starting from post eight, the trotter sprinted home in :26.4 to secure his spot in the $1 million final. The colt has drawn post two and is 12-1 on the morning line.

“He had the outside post and Dave had to look over to see if there was going to be quite a bit of early speed, which there was. He ended up getting to follow Venerate, which was a good horse to follow, and he kicked home good to secure a spot in the final,” Jim said.

Last year, Take All Comers scored one win in nine starts, finishing on the board on five other occasions. Picking up the services of Miller, the colt finished the season strong, winning a Bluegrass division at Lexington in a seasonal best 1:52.3. He rounded out the campaign with a fourth-place effort in the $600,000 Breeders Crown final at Harrah’s Hoosier Park.

“He finished up the year real strong. He was a good, strong fourth place finish in the Breeders Crown final. He won in :52 down in Lexington before that, and he’s a big, strong colt, so it was definitely something we had in mind,” Jim said of targeting the Hambletonian.

This season, the sophomore has yielded two wins from seven starts. The conditioner noted that his charge has the heart and desire to win, but at times this year circumstances beyond the colt’s control have produced mixed results in Pennsylvania Sires Stakes action.

“He’s got a real good attitude. He’s the type of horse that likes doing his work. He’s always given us anything he has in any of his races,” he said. “In the races he hasn’t been as good, there’s been a good excuse that wasn’t his fault. At The Meadows this year, he just didn’t get hold of the track very well. I think he still finished third, but he wasn’t the same. Same thing up at Pocono. He was sticking to the track pretty good that day. They weren’t his best races, but it wasn’t his fault, he was out there trying to do everything he could do.”

In his only other off-the-board performance this season, Take All Comers finished third in the Stanley Dancer Memorial, but was disqualified and placed sixth due to interference. A victory Saturday would not only give Jim Campbell his second Hambletonian triumph, it would signal a breakthrough for Miller on the sport’s grandest stage. The Hall of Fame driver crossed the wire first with What The Hill in 2017, but a disqualification for interference in the stretch erased the victory and instead elevated Perfect Spirit.

“I hope that changes after Saturday for Dave. He’s driven a lot of horses for me over the years. He started driving this colt at The Meadows last year and has driven him every start since then,” Jim said. “Dave really likes the colt; he gets along good with the colt. Dave and I are hoping to get his first Hambo win.”

As sweet as a victory would be for Miller, Campbell also would be thrilled to see Take All Comers deliver a win for Scott Farber and his Runthetable Stables. Last fall, the connections teamed to capture a Breeders Crown championship with Next Level Stuff. Now they are shooting for the summit with his half-brother.

“It would be really great, especially for Scott. He bred this colt as well. He’s been very loyal,” said the 59-year-old trainer, winner of more than 1,300 races in his career. “We’ve had some years that were not so good and a lot of bad things happened in those years racing wise. He hung in there, he was dedicated and loyal to me. Having a year like last year was quite enjoyable for both of us. Scott’s a player. If he does well in this game, he’s jumping back in. Hopefully we can continue the role and keep Scott very active in the game.”

Campbell noted that in the ‘80s, a good horse might not be at the top of his game, but could still manage to win a stakes race. Today, the speed and talent is widespread, making it hard for a colt to show up less than his best and claim victory.

“These horses today, they all go fast. You’ve got 10 of the best trotters in the country racing in the Hambletonian final,” he said. “They didn’t get there because they can’t go. I think any one of the 10 can pop up and win. It all depends on how the trip unfolds. It should be a good horse race.”

In 1995, Campbell handed the reins to his brother on that August afternoon and later found himself celebrating in the winner’s circle. Perhaps Saturday his brother, now the president of the Hambletonian Society, will have the honor of delivering the cherished trophy to his sibling. A story 26 years in the making. What a sight that would be.