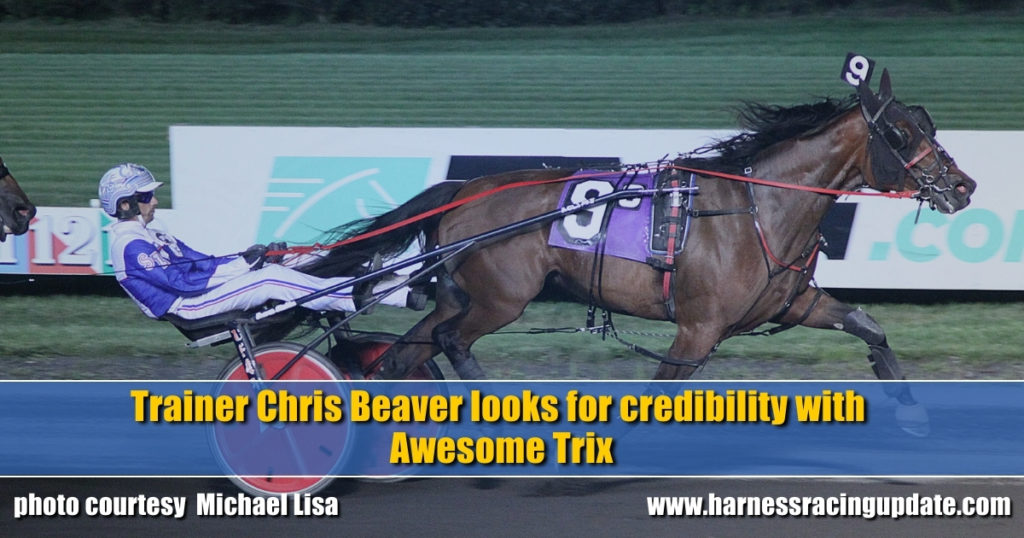 Hambletonian Oaks elimination winner was a $13,000 bargain due to conformation flaws.

For Ohio-based trainer Chris Beaver, winning the $500,000 Hambletonian Oaks on Saturday (Aug. 7) at The Meadowlands would be a confirmation — and that affirmation would be thanks to a filly that has less than perfect conformation.

The 49-year-old Beaver is the trainer and co-owner of Awesome Trix, last weekend’s Oaks elimination winner and 9-2 morning line choice from post #3 in the rich final.

In last weekend’s second $35,000 elimination, Awesome Trix was made a 24-1 choice by the betting public, mostly due to her outside post #9.

At the start, driver Scott Zeron was forced to take the filly to back in last in the field of 10. As the field went down the Meadowlands’ backstretch, Zeron saved ground and improved their position without leaving the rail.

Michael Lisa | Last Saturday, Scott Zeron drove Awesome Trix to victory in her Oaks elimination. He will try to repeat that feat in Saturday’s $500,000 final.

Sitting seventh as the field turned for home, Zeron originally wanted to fan Awesome Trix out in the stretch, but the rail opened up and the two-time Hambletonian-winning driver sent the eventual winner back to the inside. Awesome Trix skimmed the pylons and used a :27.2 last quarter to score a one-length win over the pace-setting Iteration (Brian Sears) in a lifetime best 1:52.4.

“I told Scott (Zeron) to try to put her into play at some point. I was a little worried when he went to the back,” said Beaver, laughing. “He did what he could. I was worried, but Scott knew better than me.

“She warmed up well and has been a lot better lately. She is coming into form.”

After the elims, Zeron had to decide which horse to drive in the Oaks final after he guided another long-shot Contested Hanover (74-1) to a fourth-place finish in the first elimination. He picked Awesome Trix.

After Awesome Trix’s win, Beaver was quick to thank his second trainer and the filly’s caretaker.

“Roy Dinges and Mike Riley take care of my six stabled out East. They really put a lot of work in her and getting to this place. They deserve a lot of the credit.”

Beaver purchased the bay daughter of Trixton, the 2014 Hambletonian champ, for just $13,000 at the 2019 Lexington Select Yearling Sale from breeders William Jones and Steve Stewart.

“She’s not an attractive filly,” admitted the Radnor, OH-based conditioner. “Every horse that is reasonably priced has some (flaws). I thought her flaws were acceptable. I knew we wouldn’t have to pay a lot for her. She stood a little low. In fact, one hip is lower than the other and crooked up front.

“I always felt confident in her. She always wanted to do it and she was strong. Some people think she’s sore, but really, it’s just interference. She can carry the speed and handle the interference. She’s professional and straightforward.”

“Aaron drives so many for me,” said Beaver. “He asked me late in the season that year if I had any parts of yearlings available. I had this filly.”

Merriman drove Awesome Trix in her first start of the season, a 1:55.3 score at Miami Valley Raceway on April 26, and a second-place finish in the $60,470 Currier and Ives at the Meadows on June 25.

Awesome Trix has finished on the board in nine of 10 2021 starts. Her only off the board finish this season was a result of a break in stride in the $200,000 New Jersey Sire Stakes final on May 28.

Her last start prior to the Oaks elim was a third-place finish in the $46,450 Geers Stake at the Meadowlands, beaten by a 1 ½ lengths with a last quarter in :26.3.

“She’d raced so well that week, she just ran out of room,” said Beaver. “She can get up to a high gear, but she’s bumpy changing gears. She’ll also get bumpy when she gets tired, but thankfully she hasn’t been getting fatigued lately.”

What would a Hambletonian Oaks win do to the resume of Chris Beaver, a trainer who has won more than 1,200 races, $24 million in earnings and has a career .318 Universal Trainers Rating?

“The Oaks would be my biggest win and it would be important for me win a race like that,” said Beaver. “It would give me some credibility, especially with a horse that didn’t cost a lot of money.”