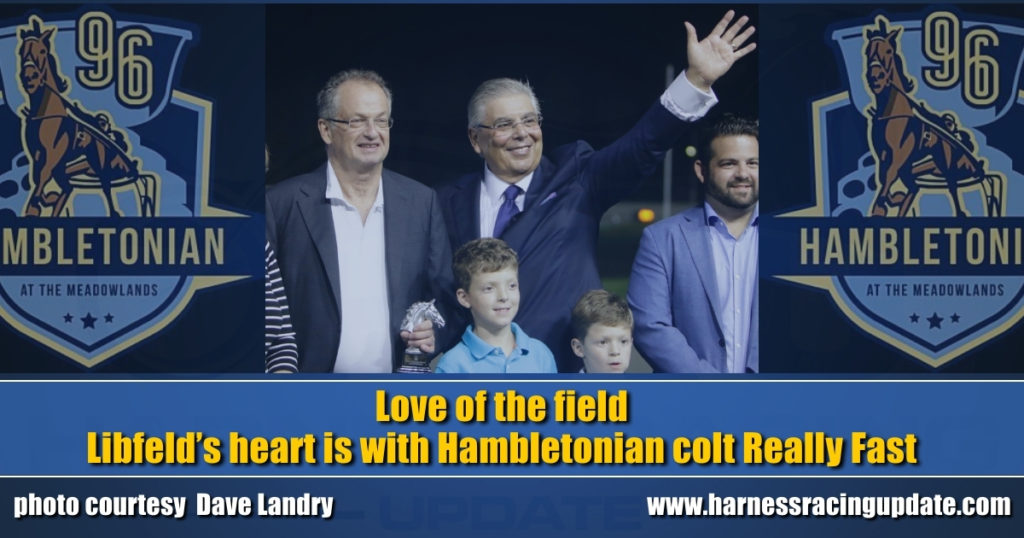 Love of the field: Libfeld’s heart is with Hambletonian colt Really Fast

When Al Libfeld and friend/business partner Marvin Katz were named 2019 Bergstein Proximity Award winners it was a rare honor and milestone for the long-time owners and breeders.

“Yes, that was very special,” said Libfeld. “I was very appreciative. We don’t necessarily do what we do for a reward, but in the pursuit of accomplishing all that we can accomplish in this business, to be rewarded with something of that magnitude is very, very special.”

This year, their dedication has been rewarded with a special colt who is seeking Hambletonian glory under unusual circumstances: $700,000 Lexington yearling Really Fast didn’t race at age 2.

“Nancy Takter bought him and put together a group,” Libfeld said. “It allowed Marvin and myself to come back in. They’re great people, a pleasure to deal with. Hopefully we have a lot of luck with him.”

“We did the same thing with Maverick, at $1.1 million. We bought back in with five people after Tony Alagna bought him. Unfortunately, it hasn’t worked out as well as Really Fast to this point. The horse doesn’t know the price tag.”

“She was with John Bax in Ontario, who did a spectacular job with her. Actually, they loved her. She was feisty,” said Libfeld. “For whatever reason, we keep giving John very difficult horses to deal with. Last year, I gave him Up And Ready, who’s racing (tonight) at Mohawk. When she first went there, she broke his arm. He named Stubborn Belle, actually. He was a small partner in the horse with me, and she was great. She also produced Ms Savannah Belle [2, 1:52.4m; $322,672], who was a very good 2-year-old who had a little trouble coming back at 3. They’re all individuals.”

Really Fast took the opposite road, requiring a little longer than his precocious sister and dam to master early lessons from Takter. “He was extremely well conformed,” said Libfeld. “We love the dam. The sister, Ms Savannah Belle, came out absolutely gorgeous and he was equally good looking, and he can move in the field. We typically go down to the Glass farm, Walco, and look at the yearlings in the beginning of June, to make decisions.”

Perry Soderberg assists him with selecting yearlings today: “Perry’s a valuable member of our team, and a very, very good and dear friend.”

Soderberg is in the position once held by Bart Glass, whom Libfeld called a “cattle guru” who excelled in separating the average from the best livestock, whether beef cattle or standardbred yearlings.

“Bart was a bit of a legend in the industry,” said the Pickering, ON real estate developer. “He developed his own line of cattle called Chiangus. He went to Italy and there were these great, big Chianina cattle. They had big horns and extremely lean meat. He thought that mixing them with Angus would produce a better quality of beef and he did that, and eventually got the horns bred off of them through various generations.”

Although Glass died in 2012, Libfeld and Katz’s yearlings are still raised at his family farm, where his legacy as a cattle breeder remains evident.

“We go down there and literally have some of that beef in stews or hamburgers every year. It’s really good,” said Libfeld.

Glass’ interest in standardbreds and “very good eye for conformation” led to him becoming the first “selector” for the Kentucky Standardbred Sales Company, noted Libfeld. “Because he saw the horses and he had a great eye, we made arrangements for him to work for us as well, simultaneously. He was the one who got them to add the word ‘Selected’ and used to go around North America to select which yearlings would be accepted into their sale, what Randy Manges and David Reid do now for the sales company.”

Libfeld himself first became interested in harness racing when Marvin Katz introduced him to a filly named Keystone Hera. “She was a turning-3-year-old pacing filly. Marvin, who was a friend of mine at the time, was about to buy her.”

They shared ownership of the profitable pacer.

How deep? “Probably about 80 or 90 between Kentuckiana and we’re partners with Brittany Farm/George Segal on quite a few mares as well,” said the 2015 and 2016 O’Brien Armstrong Breeder of the Year, an honour shared with Katz. “It’s a large operation. We’re going to be culling this year, at Harrisburg. If I choose between racing and breeding, I’m probably 60/40 towards breeding over racing. I really enjoy that process and the success. You live with the failures, of course, because there are a lot of them, but I enjoy that part a little bit more than racing.”

Hence his decision to keep Stubborn Belle and her fillies, plus re-invest in her only racing son. “We have a lot of pride in the product that we breed and raise, so when you have a special one, you want to stay involved,” said Libfeld. “Marvin and I bought back in for a piece. If I wasn’t able to buy back in on some of these horses, it would drive me crazy. The business model is to sell the colts and keep some of the fillies, and it’s working. It’s more of the Armstrong [Brothers] model, which was successful for a while. Hopefully we follow suit.”

“Julie Miller is training Knights Guard, who they absolutely love, but they haven’t figured him out yet as a 2-year-old,” said the colt’s breeder, who bought back in on the Andy Miller Stable purchase with Marvin and Lynn Katz and Sam Goldband, ON. Stubborn Belle is back in foal to Muscle Hill this year, as Libfeld is one of the fortunate few to hold shares in the stallion he considers “one of the best ever.” All of Stubborn Belle’s offspring are by Muscle Hill; the fillies are not for sale, noted Libfeld. “We have a yearling full sister called Another Like Me, who we’re going to be training this fall, and she had another Muscle Hill daughter called Stubborn Chee that will go into training hopefully next year.”

Really Fast really “put on a show” when his breeder went to see him as a yearling, in the field. Libfeld quipped that his family name means “love of the field” in German, although he specialized in building homes on fields at former farms. What he saw in the field convinced him that the colt might be part of his goal of breeding towards “something that hasn’t happened before” in the standardbred industry, where he is always looking toward the future. But there was a lot that had to happen to build on the colt’s pedigree and physique. Not racing at 2 was a particular concern.

“The only [Hambletonian winner] in my memory who didn’t race as a 2-year-old was Tagliabue,” he said. “Nancy does a spectacular job with the stable and the stock. She didn’t want to jeopardize [Really Fast] last year by pushing him past where he could go. She brought him back and educated him. He has a ton of natural ability, but he still has to learn how to rate. What they’ve accomplished, what she’s accomplished, is absolutely brilliant.”

With back-to-back 1:51.2m Meadowlands victories (a July 17 qualifier and the July 24 Tompkins-Geers Stake) leading up to his place finish to Captain Corey in their Hambletonian elimination, Libfeld said he’s feeling optimistic: “I was happy he made the final. I was happy he wasn’t abused, and he looked competitive.”

“We were very pleased to hear that Dexter Dunn chose him as his entry into Saturday’s race, so that gives us a little bit more confidence. We were a bit nervous, but it’s a wide-open race and maybe it will work out for him. I’m sure Dexter might push a couple more buttons on Saturday, because there’s not a bigger race in the world than the Hambletonian. Hopefully it works out brilliantly for all of us.”

It has in the recent past.

“We bred and raised Designed To Be, who ended up having [Kentucky Futurity winner/Hambletonian elimination winner] Greenshoe, who we bred and raised and sold. So there’s a lot [involved] with producing a world-class racehorse and hopefully a world-class stallion going forward,” said Libfeld, who cannot physically attend this year’s Hambletonian due to health concerns. But watching from home, in his heart, he’ll definitely be there. “I’ll probably be cheering loud enough that they’ll hear me in the stands at The Meadowlands.”