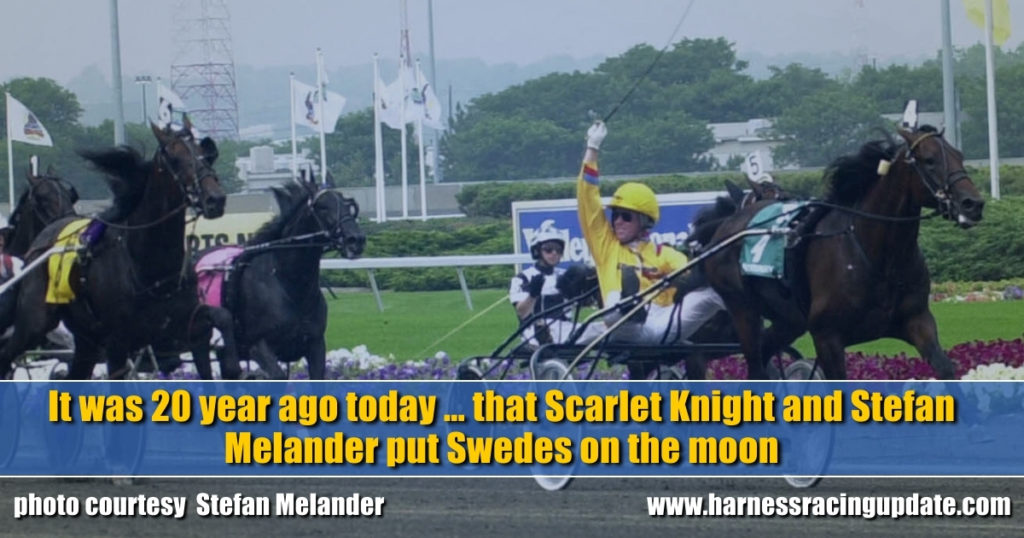 It’s highly unlikely that Swedish Hall Of Famer Stefan Melander is walking around today humming the introduction of The Beatles song ”Sgt Pepper’s Lonely Hearts Club Band,” while he’s doing what he likes the most at his farm outside of Enköping, Sweden. It’s unlikely because Melander most likely doesn’t even know that The Beatles created a song with that opening line, but exactly 20 years ago to this very day something very special happened in Melander’s harness racing life.

If there was a World Harness Racing Hall Of Fame, Melander would surely take one of the first seats in that club because he breathes harness racing. Almost nothing else exists in his world and on Aug. 4, 2001, his deep-hearted devotion for the sport paid off as he entered the winner’s circle at The Meadowlands after the Hambletonian final.

Stefan Melander | Catarina Lundström, partner of Stefan Melander and co-trainer of Scarlet Knight, posing with the main characters in Hambletonian 2001.

Courtesy Stefan Melander | Melander raised his arm in victory and posed for the photographers while winning the 2001 Hambletonian with Scarlet Knight.

The love story of Stefan Melander and Scarlet Knight (Pine Chip—Ruby Crown) began in November 1999, in Harrisburg, PA when Melander got the last bid and paid $17,000 for the Pine Chip son at the Standardbred Horse Sales Company’s yearling sale. Melander had at that point recently started his and his partner Catarina Lundström’s climb up the ladder in the industry in Sweden and Europe. The year before, in 1998, Melander trained and drove his first big classical stakes winner, Lucky Po (Quick Pay) in the biggest race for 3-year-olds in Sweden, the Kriteriet.

American harness racing had attracted Melander long before that. His connections with Håkan Wallner, Berndt Lindstedt and Sören Nordin had Melander making several trips overseas long before the Harrisburg sale in 1999. The big difference that year was that Melander spent his time as trainer, not a harness racing photographer, which was the case before he became a professional trainer in 1996.

A love affair with American trotters stirred something deep inside his head — a dream about finding the perfect horse that could conquer the world.

Scarlet Knight arrived in his new home country of Sweden after New Year’s Eve in 1999. The colt was officially 2 when he took his first training steps at Melander’s farm in Enköping in January of 2000. Seven months later, in August, 2000, Scarlet Knight qualified at Solvalla and made his career debut one month later.

In November, one year after he was purchased in Pennsylvania, Scarlet Knight claimed his first win and the impressive victory closed the book on his 2-year-old season.

A cold winter in Sweden followed and Scarlet Knight developed a lot during the period of tough training. Rumors started to be spread in Sweden that Melander had something special in his mind ahead of the spring season and in April, Scarlet Knight was ready for 3-year-old debut. Four wins in row at Solvalla, all in moderate mile rates over 1.3 miles didn’t, at that point, indicate that racing fans in Sweden had seen a future Hambletonian winner at Solvalla, but Melander’s belief in his horse increased with every victory.

Three weeks before the Hambletonian eliminations, Scarlet Knight claimed his biggest trophy so far as he won $150,000 Ulf Thoresen Memorial at Jarlsberg racetrack in Norway.

Decisions were made quickly after the race in Norway. Melander, who staked some of his Americn-bred horses purchased in Harrisburg, had to make up the perfect plan to trying to fulfill his big dream about a journey back to America with his trotter.

On July 28, 2001, Scarlet Knight stepped onto the oval at the Meadowlands as first choice in one of three eliminations for Hambletonian that year. The trip over the ocean had gone smoothly and Scarlet Knight was ready to battle some of the best 3-year-olds in the world. As it turned out, the Pine Chip son, bred in America and trained in Sweden proved to be competitive enough even with a moderate record mark of 1:58.2. Scarlet Knight looked like a king in New Jersey and his elimination told the fans that The Swede was serious business. The well-known horse photographer drove like any other pro at the Meadowlands. Scarlet Knight won in 1:54.1 and became the favorite for the Aug. 4 final.

And it was 20 years ago today… when Stefan Melander became ”Sweden’s man on the moon”. After a first over trip with Banker Hall in the lead, Melander drove perfectly and Scarlet Knight left cover racing Pegasus Spur in last 1/16 of the race and claimed the win in 1:53.4.

Few believed that it would be possible, but Stefan Melander and Scarlet Knight did it. It was a tremendous feat and as years go by, it seems even more unlikely that it really happened that day in August, 2001.

Scarlet Knight joined his owner, trainer and driver Stefan Melander in the club of Nordic Hall Of Fame in 2019 (Melander was inducted 2014) and the 23-year-old colt is still living the good life on a farm not far from Melander’s home in Sweden.