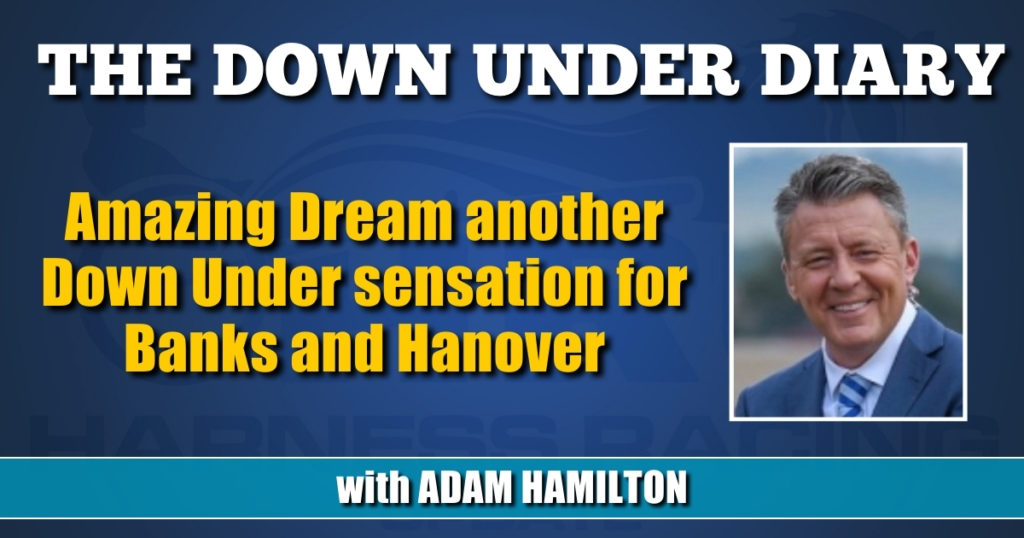 Amazing Dream another Down Under sensation for Banks and Hanover

The stunning recent dominance of champion mare Amazing Dream at the inaugural Queensland Constellations Carnival revived memories of how it all started Down Under for Florida-based owners Gordon Banks and Marc Hanover.

It was way back in 2000 when Banks and Hanover were “marketing” their star stallion Presidential Ball when, during some drinks at a casino in New Zealand, they spotted a filly called Tupelo Rose. She was beaten into third as favorite in the New South Wales Oaks, but something about her captivated the two leviathan owners.

“We watched the race with John Curtin and I said to him straight after the race I wanted to buy her,” Banks said. “He told us she was the queen of pacing down here and they wouldn’t sell her, but I said to ask anyway. They came back with a price, which surprised everyone, and we bought her.”

“We’d bought horses from Down Under before, but only to race here (in the US). She was the first one we’d raced down there, the start of it all. I loved her, she was really special. She eventually came here and did a wonderful job, including finishing third in the Breeders Crown,” Banks said.

Amazing Dream, the champion filly of her season, is by far the highest profile Down Under pacer Banks and Hanover have bought since Tupelo Rose, but she wasn’t the immediate “smash hit” Tupelo Rose was.

“We felt more pressure with her because, unlike most of our horses we took in some partners with her, and when she was beaten a few times at the start (she only won two of her first seven starts for the new owners), it wasn’t ideal, but she turned it around in Queensland,” Banks said.

Amazing Dream raced three times in Queensland – all at Group 1 level – for wins in the two marquee races of the Carnival (the Blacks A Fake and The Rising Sun) and a third in the mares’ feature, The Golden Girl.

Much of the credit goes to new trainer Nathan Purdon, the son of Hall of Fame New Zealand trainer Mark Purdon, who formerly trained Amazing Dream with his partner, Natalie Rasmussen. “While it’s a privilege to get a mare like her to train, it comes with plenty of pressure given what she’d done back in New Zealand. It was as much relief as excitement when she did what she did in Queensland,” Purdon said.

Banks added: “The only regret is that we couldn’t be there to see it, not just us, but our fellow owners, who are really big in the industry over here, but haven’t been to Australia. They’d have come down with us if we’d been able to.”

“When you know what they’ve done in the sport and see how excited they were after this mare won the Blacks A Fake… that’s something else,” Banks said. “We rang them at 6 a.m. the morning after the race and told them she’d won. They were like excited children. They’ve watched the replay about 10 times.”

“They’ll want to see her race up here, but the timing is the hard part. Ideally, she’ll hold the great form she’s in and she can stay in Australia right through until the Miracle Mile (early March). That would give her time to come over here, settle in and still be ready for the big mares’ races in July, August and September.

That would mean tackling the boys again in major races like the Victoria Cup in October, Inter Dominion series in November/December and Miracle Mile.

But Amazing Dream is one of those rare diamonds, the mare who thrives on racing the boys. She’s already beaten them in four major races: the Northern Derby (in Auckland), Auckland Cup, The Rising Sun and Blacks A Fake.

Amazing Dream and recent Queensland Derby winner American Dealer are two of “about 20 horses” Banks and Hanover race Down Under. They also race a similar number in North America.

“That’s enough, just ask Marc because he does the books,” said Banks, laughing. “I’m the one who has the fun and goes out and buys the horse. We got a bit psychotic about 15 years back when we had 99 horses, but we’ve had some therapy since then.”

While Amazing Dream and American Dealer spell briefly in Sydney before chasing further riches in Victoria from September, Banks and Hanover sit in hope they may soon be able to jump on a
plane and head Down Under to watch their new stars in the flesh.
“It’s been weird for us. Since we first went down with Presidential Ball, we’ve been back every year. When we had the stallions there, we’d go two or three times a year. We really miss it,” Banks said.