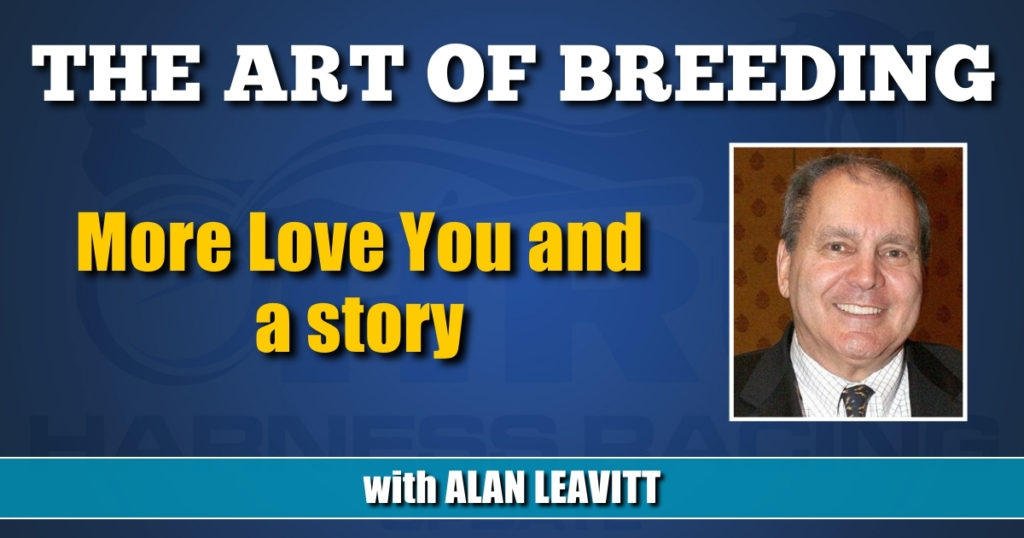 More Love You and a story

I’m still preoccupied with Love You, the French trotting super-sire. Mr. Stefan Fredriksson, of Sweden was kind enough to send me the racing histories of Love You’s first three dams. They’re in French and I haven’t quite mastered all the details yet, but it’s clear they were all successful race mares. Not surprisingly, they were all bred, trained, and driven by Jean Pierre DuBois, one of the greatest horsemen in every aspect of training, driving, and breeding standardbreds the world has ever seen.

As this kid pointed out last time around, Love You has a lot of American blood. Mr. Fredriksson was good enough to quantify it. Love You actually has 56.61 per cent American blood in his pedigree, as opposed to 43.39 per cent French blood.

But, more importantly, Love You is a rare example of a stallion who is blessed with about as stacked a genetic deck as we’ll ever see. If you imagine a horse’s genetic makeup as a deck of playing cards, which determines his ability to sire speed, it runs from a low card of “two” to a high card of “ace.” Love You’s genetic card range probably starts with a “10” and goes straight up from there.

Every foal’s genetic inheritance comes in equal parts from his sire and his dam. With Love You as the sire, every foal he sires starts life with a genetic high card, or speed gene. All the dam has to do is provide a middle range genetic card, say an “eight”, and the average of those two cards, or speed genes, is going to be a fast horse. Which is what a preponderance of Love You’s progeny are, fast horses.

Where this gets interesting to us, the standardbred breeders of America, is when you add Moni Maker to the mix.

Moni Maker, at one time, was the greatest money-winning race mare of all time, of all racing breeds. But as a broodmare, with one striking exception, she was the living proof that the phenotype, or visible horse, has no connection to the genotype, or invisible, genetic makeup. In plainer words, Moni Maker’s greatness on the racetrack didn’t have anything to do with her level of ability to reproduce fast offspring.

That fact was proven again and again, as Moni Maker’s first eight foals, all sired by a variety of top American trotting sires, were nothing special on the racetrack. Only two of them won more than $50,000, and they eked out $146,059 and $80,375, respectively. But then, in 2013, she was bred, for the only time, to Love You, and the result was a colt appropriately named International Moni.

He took a record of 1:51.3 at three, and earned $775,463. However, both his earnings and his rep would be so much higher if he had not suffered fatal interference in the final of the Hambo. He had won his elimination decisively, and if memory serves me right, he was the betting favorite in the big dance, but bad racing luck struck him down.

This kid must confess that a 2 by 5 cross is something he has not seen frequently in more than 60 years in the biz, but, as they say, live and learn. In any case, International Moni went into the stud in 2019, at Hanover Shoe Farms, and he was bred to full books of 140 mares in both his first two years. His first crop sells as yearlings this fall.

It is not my job to write ads for any horse, and I’m not going to write one now for International Moni. What I can say is if International Moni makes it as a sire, he will open up a whole new breeding line for the American trotter.

On a different note, last Saturday I golf-carted over to the Junior League Horse Show at the Kentucky Horse Park for stakes night. I was lucky to run into Randy Cates, a top saddle horse trainer who used to help us out with yearling prep. Randy is a second generation saddle horse trainer, and his dad, Royce Cates, was someone I knew during my show horse days.

Royce Cates was a crackerjack horseman, but he was also a terrific promoter. He started out in California, and he was the one who got Bill Shatner into the show horse game. He actually sold Bill Shatner his first horse, which resulted in Bill’s lifelong attachment to saddle horses, which is still alive and well today.

But I still remember quite well a Royce Cates story from the time both of us were young and showing horses. Royce, at the time, was operating out of a barn in South Carolina, where there were horse shows every weekend for at least six months of the year. Royce’s specialty was road horses, which are registered standardbreds trained for the show ring.

The usual thing at most of those horse shows was to use one of the local trainers as the judge.

In the particular year I’m talking about, Royce had a nice roadster who was his pride and joy, and had gone through most of the summer undefeated.

Then came a show at Thomasville, where the judge was a fellow trainer named Billy Grubbs, and he tied Royce’s roadster second in the roadster stake.

Two weeks later, their positions were reversed, with Royce the judge at East Martin and Billy Grubbs was there with his string of horses. Billy was a little nervous about showing in front of Royce, so he sought him out before the show started.

“Royce, old buddy,” he said, “I sure hope you ain’t mad about where I tied your road horse at that other show.”