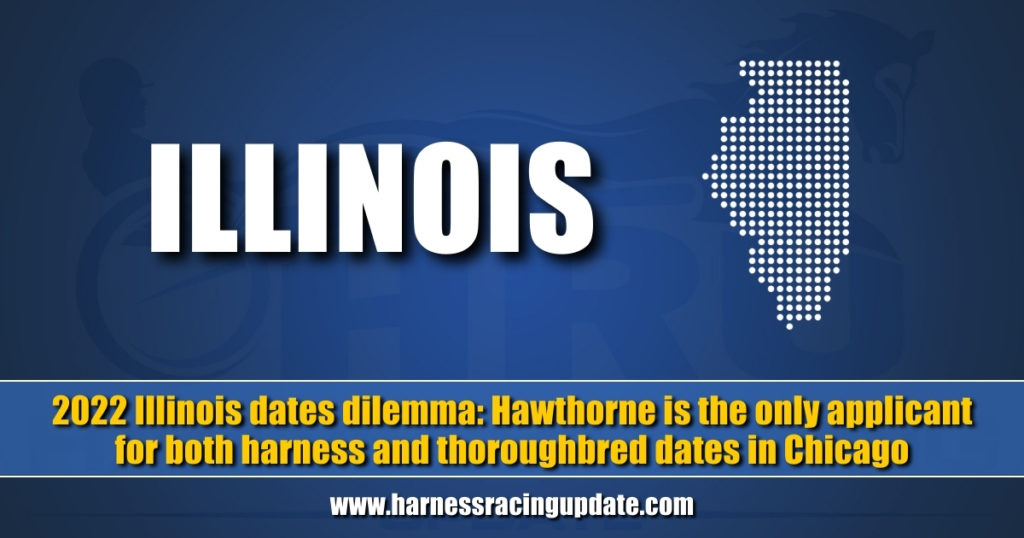 2022 Illinois dates dilemma: Hawthorne is the only applicant for both harness and thoroughbred dates in Chicago

As expected, thoroughbred racing at Arlington International will cease after this year.

As expected, corporate owner Churchill Downs, Inc. (CDI) hasn’t applied for 2022 racing dates at Arlington International Racecourse, leaving Hawthorne Racecourse as the only applicant for both harness and thoroughbred dates in the Chicago metropolitan area.

Friday (July 30) was the deadline for applications for the dates that will be awarded by the Illinois Racing Board after hearings on Sept. 23.

Hawthorne applied for 365 programs for both the standardbreds and thoroughbreds, an unworkable arrangement because the respective racing surfaces are incompatible and the stable area can’t accommodate both breeds simultaneously.

“We’ve had a great relationship with both groups over the years and I don’t expect there’s going to be any issues,” Miller said. “I expect we’ll be meeting over the course of the next few weeks, working in unison to put together a schedule that’s going to make the most sense for everybody involved. We want to make sure there are enough opportunities for both thoroughbred and standardbred horsemen in the state of Illinois. We want to have everything in place before the dates hearings.”

Tony Somone, executive director of the IHHA, sees the situation in the same light.

“This is something we anticipated — it’s what we feared,” Somone said. “We’re certainly not happy with it but we have to deal with it. We’re going to have to share Hawthorne with the thoroughbred horsemen. We have a terrific relationship and I’m confident that we’ll find something that works for everybody.

“We’ll have an eye on securing some summer days. Making sure 2-year-olds have a complete racing season is so important to our breeding industry. With that in mind we will meet with the thoroughbred leaders and Hawthorne and come up with an amicable situation for everybody.”

It helps that Somone’s counterpart at the ITHA, Dave McCaffrey, is a former harness driver and trainer and served as president of the IHHA before becoming the ITHA’s executive director.

Currently, Hawthorne is conducting a 63-night harness meeting that began May 7 and will continue through Sept. 26. Racing is held on Friday, Saturday and Sunday nights.

The harness meeting is sandwiched between two thoroughbred meetings at Hawthorne for a total of 53 live days — from March 6-April 25 and from Oct. 1-Dec. 31.

What appears to be the last thoroughbred meeting in Arlington’s rich history that dates back to 1927 left the starting gate on April 27 and will hit the finish-line on Sept. 30.

While Arlington is synonymous with thoroughbred racing its history book does have a harness racing footnote. In 1976, its dual-breed sister track, Washington Park, perished in a fire and in 1977 and 1978 its harness meeting was moved to Arlington by then-owner Gulf and Western, Corp. Although the two years of racing at the 1 1/8 mile track were neither a financial nor an artistic success, there were a couple of highlights. Future Hall of Fame driver Dave Magee deadlocked Stan Banks for the driver title in 1978 and Hall of Fame pacing mare Silk Stocking set a world record with a time of 1:57.4.

In the 1970s at one time or another 10 tracks in Illinois conducted extended meetings, but there are only two survivors — Hawthorne and downstate Fairmount Park, across the Mississippi River from St. Louis. After running an April 27-Sept. 6 thoroughbred meeting consisting of 63 live days this year, Fairmount wants to expand to 150 programs in 2022 and race from March 12 through Nov. 20.

In the past Fairmount also offered harness racing but ended its involvement after its 1999 meeting and has no plans to offer the sport in the future.

Starting in the mid-1990s Illinois tracks began imploring the legislature to permit casino gambling, remaking them into racinos that would funnel a portion of their revenue into the purse accounts, thereby enhancing the quality of racing.

Arlington’s then sole owner Dick Duchossois, who rebuilt the track into what Architectural Digest called the most beautiful racetrack in the world following the 1985 fire that destroyed the clubhouse and grandstand, closed his thoroughbred palace in 1998 and 1999 in what proved to be a successful attempt to get significant breaks in taxation. Earlier he had clamored for a “racing industry casino” at Arlington that he said, “would have made Illinois racing the best in the country.”

In 2000, Duchossois reopened Arlington and that same year he merged with CDI, making him CDI’s biggest stockholder by far. In addition, the CDI board of directors was expanded from 12 to 15 members with Duchossois, his son, Craig, and employee Robert Fealy becoming the new members.

“This day is historical for racing,” Duchossois said at the time. “This merger will benefit both Churchill Downs and Arlington and more important, it will strengthen our industry… in both Illinois and North America as well as benefit the horsemen and fans who participate in the sport.”

It didn’t quite turn out that way.

However, as recently as 2019 it seemed hope was on the horizon after a massive gambling expansion bill was approved and signed by Gov. J.B. Pritzger.

Hawthorne and Fairmount immediately began embarking on racino projects, and Hawthorne’s $4 million venture is targeted for completion late next summer.

But Arlington sent shock waves through Illinois racing by passing up the opportunity to add the casino it had long been pleading for. Parent company CDI said the reason was because the horsemen’s cut was too big but the obvious intent was to shield another of its holdings, the nearby Rivers Casino, from competition.

After Neil Bluhm’s Rush Street Gaming opened Rivers in 2011 it quickly became the most profitable casino in the state and in 2019 CDI bought a 62 per cent interest.

The offshoot: early this year CDI announced it was selling the 326-acre Arlington property for redevelopment.

CDI chief executive officer Bill Carstanjen prefaced the announcement last summer when he said: “The long-term solution is not Arlington Park. The land will have higher and better purposes for something at some point.”

Bidding closed June 15 and, according to CDI, “numerous parties have made offers.” On June 17, the National Football League’s Chicago Bears confirmed reports that they were among the bidders.

Perhaps not by coincidence five days later the team announced a deal with Rivers Casino to make its digital arm, BetRivers, the team’s exclusive sportsbook and casino partner. The Daily Herald conjectured that “Revelations of the sports gambling partnership lends more fuel to long-held speculation that the team might relocate to Arlington Park. And it shows that executives from the Bears and Churchill/Rush Street (Gaming) are already talking.”

Reportedly, CDI turned down a $200 million offer for the racetrack and its casino license, according to an anti-trust complaint filed with the Illinois attorney general’s office by the ITHA.

One other group that is led by former Arlington president Roy Arnold and includes some prominent thoroughbred owners and trainers has bid on the track with the intention of preserving thoroughbred racing there, but it appears to be doomed because of CDIs attempt to make a twin-killing and by destroying Arlington as a racetrack gambling option and, at the same time, wiping out a potential casino rival to Rivers.

Following the 2000 CDI merger, Duchossois, who will turn 100 in October, continued to micro-manage Arlington but in recent years he has assumed a passive role as chairman emeritus at the track. Coinciding with him stepping back in involvement with daily operations, he and his family sold a substantial amount of their CDI stock in 2015 and 2017, going from a 25 per cent interest to a 7.1 per cent holding and relinquished their seats on the board of directors.

While Duchossois has been hailed for his contributions to thoroughbred racing he can’t be called a friend of harness racing. In 1988, he acquired the downstate harness track Quad City Downs but discontinued racing following its 1993 meeting.

In retrospect, it appears that the acquisition was made to take advantage of the off-track betting parlor opportunities for Quad City Downs that a newly-enacted law made possible. Following the cessation of racing the track continued to operate as a simulcast outlet until January, 2015.

The closure of Quad City Downs as a racetrack deprived the Chicago tracks of a minor league feeder that produced drivers, trainers and horses. The list includes Magee and McCaffrey.

Chicago harness racing’s ongoing dates shortage dilemma began when the sister tracks, Maywood Park and Balmoral Park, were forced out of business because of bankruptcy following their 2015 meetings.

The situation arose after federal investigators wire-tapped a phone conversation between Balmoral president John Johnston and lobbyist Lon Monk, a confidant of former Gov. Rod Blagojevich, during which Johnston emphasized the importance of Blagojevich signing an extension of a casino impact fee bill that had been passed by the state legislature. The bill called for the state’s four most prosperous casinos at the time — Harrah’s in Joliet, the Empress in Joliet, Hollywood in Aurora and Grand Victoria in Elgin — to allocate a portion of their gross revenue to Balmoral, Maywood, Hawthorne and Arlington to be used primarily for purses.

Monk, in turn, urged Johnston to make a $100,000 campaign contribution to Blagojevich. Although the contribution never was made, Blagojevich signed the bill shortly thereafter.

Blagojevich was sent to prison for trying to sell U.S. Senate seat vacated when Barack Obama was elected president. The phone conversation between Monk and Johnston was used as evidence of the former governor’s corruption, prompting the four casinos to sue Balmoral and Maywood for alleged complicity. They were awarded $77.8 million in damages, bankrupting the tracks.

At the hearings for 2016 racing dates Hawthorne and Arlington formed an alliance in making a joint schedule proposal. Hawthorne allotted Arlington a portion of its host track revenue from out-of-state simulcasts for purses and, in return, Arlington supported Hawthorne’s thoroughbred application and its proposal to conduct harness racing for the first time since 2008.

In view of Balmoral and Maywood’s bankruptcy, the board denied their dates requests — in effect, shutting them down permanently — and approved the schedule jointly proposed by Arlington and Hawthorne.

The 2019 gambling expansion legislation calls for a replacement in the form of a new harness track/casino to be located in one of six townships in south suburban Chicago, and at the dates hearings in September of that year it seemed as though a racino in the village of Tinley Park was a done deal.

Real estate developer and video gaming magnate Rick Heidner was planning to buy the former Tinley Park Mental Health Center and build a state-of-the-art facility and the Racing Board approved his application for a Dec. 6-29. 2020 harness meeting.

But a month later it was revealed that Heidner had business ties to a banking family with alleged organized crime connections and Gov. Pritzger called off the sale of the property.

Since then the possibility of a new harness racino has been in limbo, leaving Hawthorne as the only game in town for standardbred horsemen and in 2022 thoroughbred horsemen will find themselves in the same unenviable situation.

“It’s certainly not going to be perfect for everybody,” Somone said, “but we’ll come up with an amicable situation for everybody.”