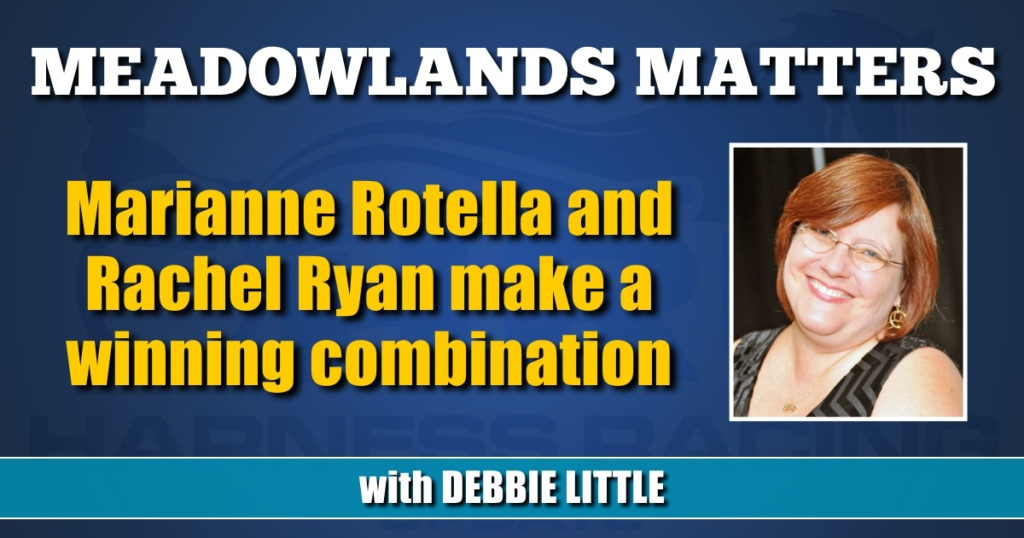 The dynamic duo of Marianne Rotella and Rachel Ryan has paid off better for The Meadowlands than any daily double ever has.

“Quite honestly, at the end of the day, without either one of them, things would be a lot tougher around here,” said Meadowlands’ chief operating officer/general manager Jason Settlemoir. “I’m very fortunate to have both of them and I don’t say that about a lot of people or a lot of things, and I feel The Meadowlands is very fortunate and the industry is very fortunate as well.”

Rotella, The Big M’s assistant general manager, and Ryan, director of marketing and event operations, work seamlessly together to put on the best events possible and, above all else, take care of their customers.

Rotella and Ryan both started their stints at The Meadowlands at the old building, then operated by the New Jersey Sports and Exposition Authority (NJSEA), and through hard work and determination over time, have risen to their current management positions.

“I started as a secretary [in 1987] and worked my way to director of admissions/guest services,” said Rotella.

In 2012, following Superstorm Sandy, Rotella found her department unexpectedly understaffed, and as she was pushing a program cart through publicity, she ran into Settlemoir and his young son, Travis, who jumped on the cart for a ride. That chance meeting had an impact, since Rotella was promoted to her current position shortly thereafter.

“That’s the best professional decision that I ever made, making her the assistant general manager,” said Settlemoir.

Ryan started riding horses at the age of 3 and grew up going to Monmouth Park in the summer and The Meadowlands in the winter.

“I wrote my senior paper in one of my marketing classes on racetrack advertising and marketing,” said Ryan.

She worked part time at The Big M as a media assistant until she graduated college in 2004 and was hired full time.

“Then I became the marketing coordinator and slowly, slowly worked my way to here,” Ryan said with a laugh.

Settlemoir sees a lot of the same work ethics and qualities in Ryan that he also sees in Rotella.

“I know that Rachel doesn’t like hearing it sometimes, but Rachel is who I look to become the assistant general manager when Marianne’s finally ready to retire,” said Settlemoir. “Every time you ask either one of these ladies to do something, you never get any pushback. They have an understanding of where we are and where we want to go and that’s comforting. You see them actively involved not just in the administrative work but also on the front lines with the employees at the admission gate when we’re doing the big events.”

Rotella and Ryan will always be seen in the middle of the action, not just to support their employees, but also to be ready should something go wrong.

“I prefer to be down there manning the door, because then I know it’s going correctly and if there’s a problem, it’s on me because I was down there,” said Ryan.

Over the years, The Big M has played host to many events, most of which have nothing to do with harness racing, but by holding these events they get people into the building and hopefully, one day, they could become racing fans.

Putting on these events — beerfest, chili cook off, wiener dog races — and seeing and being with the people are the best parts of the job for both Rotella and Ryan.

On Saturday, July 24, they held a handicapping contest for people 18 to 30 years old. The idea for the contest came from Big M chairman and chief executive officer Jeff Gural four years ago.

“Jeff had mentioned that he wanted to do something just for the younger crowd and see if it draws anybody in,” said Ryan. “He gave the idea and said run with it and make sure we get it done. So, we got it done. We had 59 contestants [the most ever] and there are a lot more that came that were intimidated about participating, but once they saw their friends doing it, they said, ‘Oh we’re definitely going to come back next year.

“The goal is for them to come back for something else. It’s great if they come out for racing. We’re just trying to get them out here for anything.”

There’s no question that Hambletonian Day is one of the biggest events for The Meadowlands and Rotella and Ryan expect, as in all previous years, to talk throughout the day about what is or isn’t working.

“I start making notes that night or the next day [for next year’s Hambletonian],” said Rotella.

Despite Settlemoir’s attempts to get both Rotella and Ryan to join him in winner’s circle presentations, they prefer to work outside of the spotlight.

“I described it recently as Jason’s the politician, [chief financial officer] Alex [Figueras] is the finance guy and I’m the fixer,” said Rotella.

“I’d rather just take care of everything and get it all done and make sure people are happy and make sure the customers are satisfied,” said Rotella. “That’s my gratification. Making sure that everything goes well for Jeff and Jason so that when they are out there in the spotlight, they don’t have to hear complaints.”

Moira Fanning, director of publicity/chief operating officer of the Hambletonian Society, started working for the Breeders Crown in 1987 and has known and worked with Rotella and Ryan for their entire careers at The Big M.

“The amount of staff and resources that have contracted since they both worked over on the other side for the NJSEA was enough to drive most of those people out of the place,” said Fanning. “But they stayed and they transitioned very well into doing a whole lot more with a whole lot less. And they both really care about racing and like racing, which I feel is important.

“The two of them, Rachel and Marianne, they get no accolades, no recognition, they get a lot of s**t because when something goes wrong, which inevitably it’s going to, they’re the ones that have to deal with it and I’m sure they’re not paid what they’re worth. They’re priceless. The Sam McKees, the Mariannes, the Rachels, they’re irreplaceable people.