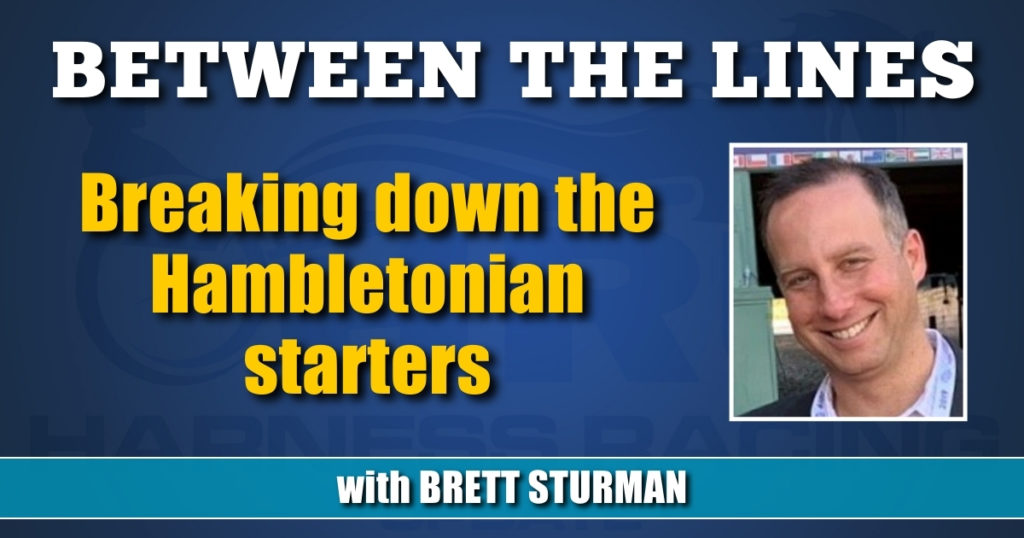 Breaking down the Hambletonian starters

Grouping the starters from longshots to favorite.

A total of 16 male trotters are entered Saturday (July 31) across two eliminations for the Hambletonian, in which the top five finishers from their respective eliminations will return to the Meadowlands next Saturday for their shot at Hambletonian glory. Here is my grouping of horses for the 2021 edition of the stake.

Going in order of post position by elimination, ZENITH STRIDE will look to recapture the magic from his massive upset in last year’s Peter Haughton Memorial from Hambletonian Day, but even that seems unlikely. Most efforts this year have been only fair, and he broke stride last out after being well situated. SPY BOOTH is one of three Takter trainees entered across the two eliminations, though is still a maiden through eight lifetime starts; pricey yearling presumably earned a shot by closing belatedly last out to be second to Really Fast. LOCATELLI rates a better chance than the previously mentioned pair, but still falls just outside of contender status. His race three back would make him interesting though; broke last out while in the midst of a brush from the third. RATTLE MY CAGE beat weaker twice here convincingly in June but couldn’t keep up with some of the better ones last out when starting from the rail. TAKE ALL COMERS is another that maybe I’m not giving enough credit towards. He was well regarded in the Dancer following a PASS win and subsequent runner-up to Dancinginthedark M in the Reynolds; couldn’t keep up late in his most recent after being used early.

They didn’t come back as strong at three: On A Streak, In Range, Venerate

The highly-accomplished and award-winning trio of ON A STREAK, IN RANGE and VENERATE earned almost $2 million last year as freshmen between the three of them but have made less than $170,000 so far at 3. VENERATE has lost all three times he’s been favored and the Venerate of last year would have won last week’s Geers stake. IN RANGE rallied nicely from an impossible spot two back in the Yonkers Trot and followed that up with a good front end try against a stakes-caliber non-winner’s race last out. ON A STREAK hasn’t been as strong as the latter and had every chance up the inside in his Geers division but couldn’t reach. I’d rate In Range the best of these three and it’s not to say that in the case of him and Venerate they are without chances, but they’ll need to come back to their prior form.

CUATRO DE JULIO was one that I thought would be one of the favorites back during the winter, and his race in the Dancer was highly encouraging. Making his first start two weeks ago since the end of May when he just missed in the New Jersey Sires Stakes (NJSS) final, he took a bold run first-over at Captain Corey in a multiple move effort and held well until very late. He was a 1:51.3 winner from last year and is one of a few that could be figuring it out at the right time. DELAYED HANOVER outraced his odds in the Dancer when he led the way and beat all except the presumptive Hambletonian fave that he couldn’t stave off. He’s going to attract attention to on the driver change to Dexter Dunn. AMBASSADOR HANOVER rates a contender from his Geers win in which he went wire to wire and fended off pressure to both his sides. He’s still going to have to go faster than he’s ever gone before but showed last week that he shouldn’t be written off completely. SONOFAMISTERY kept it all together in the Dancer when he pounced late off battling leaders to get the 1:50.2 score. He has his issues, but is consistently fast; seems like he can trot with anyone at his best. It’s not often you see the Yonkers Trot winner go into a non-winner’s race and not be the favorite, but that’s what happened last out with JOHAN PALEMA en route to a resounding lifetime best mark of 1:50.4. He doesn’t always win the flashiest fashion but his ceiling remains to be seen; credit to Svanstedt for the turnaround since last year. CAPTAIN COREY is another that exits his best race yet, and for him that’s saying something considering all his successes. He fended off heavy pressure last out when winning the battle but losing the war; trainer Svanstedt is well represented in this year’s Hambletonian edition.

REALLY FAST has come a really long way in a really short time for Nancy Takter and bears similarities to a Jimmy Takter Hambletonian finalist from 2019, Tactical Landing. Like Tactical Landing, Really Fast was a high-priced yearling ($700,000) and is also a colt just finally showing his potential for speed in the weeks leading up to the Hambletonian. As someone who hasn’t yet been tested against high-level stakes competition it remains to be seen if he’s really this good; could be a complete Hambletonian hit or miss.

It looked like trainer Marcus Melander was a lock to win the Hambletonian two years ago when he had a series of monsters entered including Greenshoe. He didn’t win the Hambletonian that year but he will bring the favorite into the race once again as well as other previously mentioned contenders, this time with Dancinginthedark M. The Ready Express colt showed obvious potential last year at 2 and has turned into a powerhouse this year. He stamped himself with Hambletonian favoritism off his win in the Dancer when he overcame a first-over trip to win in 1:50.1 with a last quarter of :26.4. I wouldn’t say that he’s miles better than anyone else but he does have an overall edge heading into this week’s eliminations.

In a talented group of 20 fillies vying across two eliminations, BELLA BELLINI is squarely the one to beat. Trainer Nifty Norman deserves a world of credit to developing Bella Bellini to where she is considering how her career started off, going winless as a 2-year-old through seven starts with just $4,398 in earnings. Coming from the regally bred family out of Bella Dolce, her race from two weeks ago against some of the best 3-year-old colts stands out. She rallied off cover to close purposefully and was gaining late to the inside of the Yonkers Trot winner that sat the pocket to the top of the stretch. Two back she bested many of these same highly considered 3-year-old fillies including Donna Soprano and Lady Chaos, and was further flattered when Donna Soprano came back to win next out. If there was future wagering I’d think even money for her to win the Oaks final would be a fair proposition.

Switching states and venues, Saturday also features the $375,000 Adios final at The Meadows. Consistent with how I described last week’s elimination results in this column here, WATER SPORTS TEEN is suddenly the one to beat. Streaking in the right direction while others who had been previously more accomplished are now suddenly suspect, he’ll deserve favoritism. Surprisingly, Yannick Gingras opts off SOUTHWIND GENDRY for LOU’S PEARLMAN. The latter paced a couple of fast miles at the Meadowlands two and three back but was no match late for his elimination winner; I’d look for Gingras to give him a shot though. ABUCKABETT HANOVER capitalized off a perfect trip to get back on the right track last out. ROCKYROAD HANOVER took an early shot and a late shot against Water Sports Teen in his elimination but it was to no avail. Can HELLABALOU shock the world again?