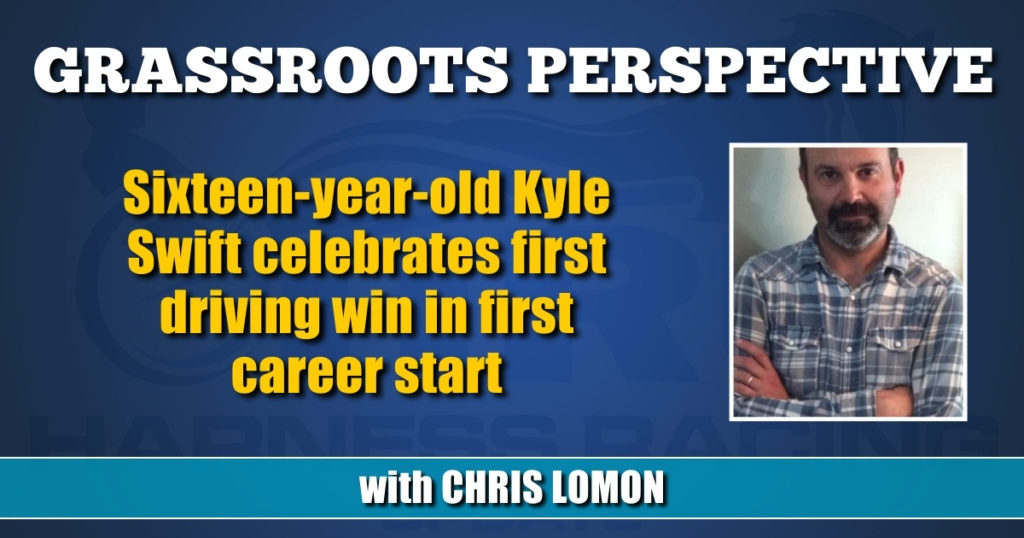 It was a feeling unlike anything Kyle Swift had ever experienced.

A state of calm came over the teenager as the starter car began to pick up speed for the third race – and his first – at Batavia Downs on the afternoon of July 15.

When the starter car sped away on the field so too did Swift and the daughter of Huntsville (NY).

As the finish line drew closer, Swift, despite the enormity of the moment, was able to embrace it all, a scenario he had played out in his mind countless times.

“I was pretty relaxed. I was really confident in her because I had sat behind her before. Everything just felt like when I had schooled her. We got out of there, got to the front and at the five-eighths pole, she took off and from there it was pretty much game over. It felt pretty good. I had never felt that feeling before. It was my first race, first win and it was at my hometown track. It felt really good.”

Just as it did for the many family and friends who came out to cheer on Swift.

He certainly gave them plenty of reason to celebrate.

“Everybody was there and it was really nice to be able to share it with so many important people in my life.”

For as thrilled as he was to kick-off his career off in such impressive fashion, Swift didn’t dwell on the storybook start for long.

His thoughts, later that day, turned to chasing more moments like had just experienced.

“I watched the replay once or twice, but then it was time to move on to the next one. It’s a very surreal moment and the thing that really stuck with me was, ‘I want to keep doing it. I want to keep it going.’”

Not only for himself, but also his family.

Swift comes from an impressive harness background. His father Ray Fisher Jr. has recorded over 4,600 driving wins and more than $20 million in earnings during his career, while his mother is zeroing in on 450 training victories and $2.5 million in purse earnings.

“I want to keep doing well for my family and make this a success as a living. Hopefully, I can continue getting good horses and be the best I can be. When I was about six, I started understanding the business, and I knew back then that I wanted to be a part of this industry.”

His connection to the horses was immediate.

Swift has always appreciated the individual attributes of each horse he has known. Not even the stubborn ones dampen his enthusiasm or willingness to get the most out of them.

“They’re all different and I like that. Each horse teaches you something different. I’ve been able to learn something about them and myself every day. Good or bad, they teach you something you need to know.”

Pink Delight would be a prime example of a horse that’s helped Swift in his horse racing education.

Bred by Crawford Farms and owned by John and Linda Brei, the pacer is a hard-nosed type, a rookie with an attitude.

Not a problem for Swift.

“She didn’t really get along with anyone else, so in January I started sitting behind her and she finally started to figure it out. I schooled her behind the gate the first few times. I think she started to trust me and I started to trust her. It’s worked out nicely.”

Swift, who will be starting his junior year at Akron (N.Y.) Central High School this fall, has already developed a list of goals, both short term and long term.

What they are exactly will remain with him.

“I’d like to be the best, but you have to take it one race at a time. You have to start small, but you need to start somewhere.”

“Many people have told me something that has stuck with me. There’s a guy at the racetrack, Tony Cummings, who told me that I always need to be respectful of everyone and that I can learn something from each person I talk to. I want to show that respect to people, to be kind and considerate, and to always thank people who give me an opportunity to drive.”

An accomplished athlete – Swift plays centerfield on his high school varsity baseball team – he’s already incorporated some of the skills and lessons learned on the diamond into his driving life.

He notes a few similarities between the two sports.

“You have to be mentally tough in both. If you’re not, things can go bad very quickly. When you’re at the plate, just like in horse racing, if something doesn’t go your way, you have to move on. You can’t dwell on what happened. There’s also the teamwork aspect. You have to work together. With baseball, you have to communicate with your coach, and with racing, you have to have good dialogue and listen to the trainer. You have to be on the same page on everything. You want to make sure the stars are aligned.”

And speaking of stars, Swift, a rising one himself, is dressed for success on the racetrack.

His driving colors are a tribute to his father and grandfather, accompanied by a personal touch of his own.

“My dad uses orange and brown, and my grandpa, Tom Swift, uses baby blue and white. So, I mixed them together. I also have stars, which are offset. The travel baseball team I played for had offset stars and I really liked them. I have those as well as an ‘S’ on there.”

Swift is hoping to see more of that look in winner’s circle photos.

He doesn’t need to be asked what it will take to see that wish come into focus.

“That feeling that I had from the first win, I want to experience that as much as I can. I’m just going to keep working as hard as I can and do my best every single day and every single race.”